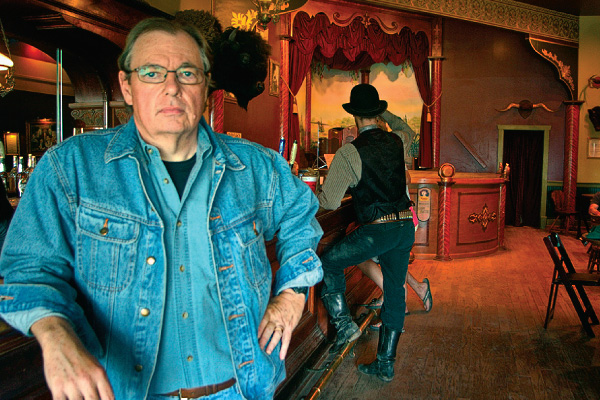 A Kansas native, the WWA Spur award-winning novelist Max McCoy was raised on the edge of the American prairie between Baxter Springs, Kansas, and the Kansas-Missouri borderlands of Joplin and the Ozarks. McCoy, an associate professor of journalism and director of the Tallgrass Writing Workshop at Emporia State University in Emporia, Kansas, was an investigative reporter at The Pittsburg Morning Sun and The Joplin Globe for many years before entering academics.

Early on, his passion for true crime led him to write for True Detective. In 1994, he published his first Western, The Sixth Rider, which earned him the WWA Medicine Pipe Bearer’s Award for Best First Novel. Eighteen novels later, McCoy has just published his 19th, The Spirit is Willing (An Ophelia Wylde Paranormal Mystery), the second in his Kensington series, with his 20th due out in 2015. McCoy’s love of the dark edge between good and evil that shadowed the settlement of his Kansas-Missouri borderlands is reflected in the stories and characters that inhabit the pages of McCoy’s favorite works of Western fiction:

1 Huckleberry Finn (Mark Twain, 125 Anniversary Edition, University of California Press, 2010): Twain’s most luminous book. Although a flawed masterpiece, Ernest Hemingway believed all American literature flows from Huckleberry Finn. Twain grew up with America, and Huckleberry is the voice and emerging conscience of our country.

2 Little Big Man (Thomas Berger, Dial Press, 1964): In a career of jumping and mixing genres, Berger’s satiric novel heralded a coming disenchantment with the Western mythos. I was never interested in Westerns before Berger, but this picaresque story—which questions the very nature of reality—encouraged me to attempt my own bold and strange Western stories.

3 True Grit (Charles Portis, Simon & Schuster, 1968): First serialized in The Saturday Evening Post, I read the book when I was 10 or 11 years old. I was blown away, obsessed even. I loved the voice and strength of narrator Mattie Ross, and even Glenn Campbell’s acting couldn’t ruin the 1969 film version. The Coen brothers’ adaptation, however, is superior.

4 Monkey Wrench Gang (Edward Abbey, Lippincott Williams & Wilkins, 1975): Oh, Edward Abbey. He’s much of the reason I sometimes roam the American Southwest now in my Jeep Wrangler (Hayduke Lives!) full of serious gear, in search of adventure. This novel, about a gang of misfits engaged in serious eco-terrorism, liberated my inner outlaw. Abbey’s The Brave Cowboy and Desert Solitaire are also contenders.

5 William Goldman Four Screenplays with Essays (William Goldman, Applause Theatre & Cinema Books, 2000): Not a book, strictly, but William Goldman’s screenplay for George Roy Hill’s Butch Cassidy and the Sundance Kid, 1969, should be read as such; it’s a master class in storytelling. It also provided the seed for so much that is still being worked out in popular culture today.