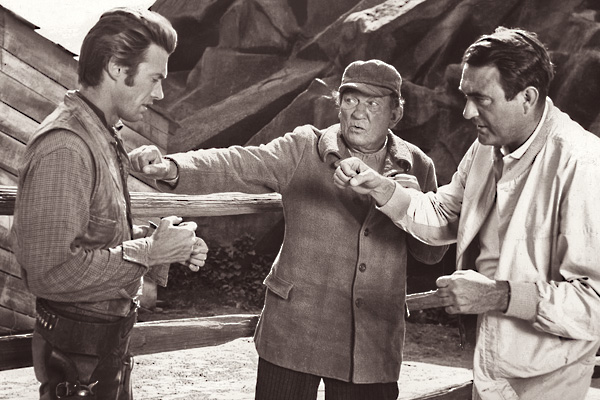 He was one of the pros. The six-foot-seven gentle giant directed movie stars by letting them do what they did best, while he created seamless entertainments.

That’s the old-school way. The way Andrew V. McLaglen learned, watching his father, Victor, going through the trenches for John Ford.  Andrew’s death last August, at the age of 94, severed one of the last great connections to the Hollywood of Ford, William Wellman and Budd Boetticher, all of whom he worked for as an assistant, before setting out on his own directing career.

Their style was to find the center of their stories and propel their films toward it. Anything that detracted was out. Andrew followed that credo from his first feature, 1956’s Man in the Vault to one of his last, in 1989, Return from the River Kwai.

Even when scripts faltered, Andrew refused to, soldiering on for more than four decades. The 1960s were his creative watershed; he steered films that personified  the later, iconic image of John Wayne.

Wayne had known Andrew since he was a teenager hanging out on Ford’s sets, but they wouldn’t meet professionally until 1949’s Sands of Iwo Jima, when Andrew script clerked for Republic Studios.

Republic was Andrew’s proving ground and would lead to his working for Wayne for years, as an assistant director, producer and director of low-budget features. The features took him to CBS, and Gunsmoke, where his shows were heralded as the best in the series. His success led him to direct Richard Boone as Paladin; Andrew established himself
with more than 100 episodes of Have Gun, Will Travel.

Wayne decided his friend had had enough television seasoning and that the producer was ready for a chance at something bigger. Andrew loved recalling that career changer: “I’d done five features, and all this television, so Duke thought maybe I was ready to do a picture with him. McLintock! was my first big picture, and I was pinching myself all over the place. It was just a hell of a good experience for me.”

McLintock! opened the door for four more starring Wayne, with Chisum being their other major hit. During this time, James Stewart called on Andrew’s services for Shenandoah: “I couldn’t believe it!  I said to Jimmy, ‘Did you see McLintock!?’ And he said, ‘No, I like what you did on Gunsmoke!’”

Stewart would make three more movies with Andrew, with my personal favorite, Bandolero! The director always gave full marks to Stewart and to costar Dean Martin, whom he said was the “nicest” of all the stars he had worked with in Hollywood.

The first time I spoke to Andrew, I called him out of the blue, as a fan. He was living in Washington and chatted with me about his films, just out of his own sense of courtesy to a strange kid.  My home number was disconnected, so I was feeding quarters to a pay phone to keep the conversation going. We touched on everything from Wayne to Bandolero! to Roger Moore.

That call led to others filled with grand stories, as well as an interview covering Andrew’s entire career for a book I was preparing. Always honest, even about films that didn’t perform, Andrew had an optimistic, enthusiastic spirit that found its way into his work. He continued full steam, even when his career began to stall after the mediocre performance of 1967’s The Way West, which was drastically recut, and the 1971 Western Comedy Something Big. He admitted, “Careers run out of gas a little bit.”

He had seen Ford and others stall too, and he knew that by plowing on, the ship would right its course. He was back toiling in television when he was handed The Wild Geese in 1978. That huge international hit was followed by a number of fine adventure movies, before his retirement.

He didn’t actually retire; he became involved with theatre. He continued directing past his 85th birthday. He directed all the big stars, with skill and his own natural humor, in the classic, seamless manner that suited Hollywood’s best. The films will endure, but I will miss those phone calls.