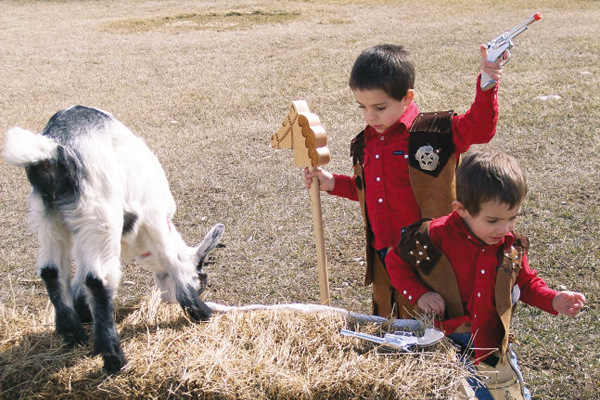 “Some toys make noise, some toys waste time, then there are the toys which provide engines for the imagination,” says Armando Roggio, owner of Cowboy Toys & More, which specializes in Western toys.

When his son Giovanni became inter-ested in horses and old cowboy movies, Armando and his wife Melisa were having a hard time finding toys for him in the chain stores. If they found anything, it was likely designed for a girl. Not satisfied giving his son a pink saddle to ride on, the former advertising sales executive started up his own toy store on the Internet (www.cowboy-toys.com) to not only outfit his son with the proper cowboy tools, but to also provide what was obviously a much needed product in today’s market.

One toy collection that Armando prides himself on carrying is his selection of cap guns. “We could not find any store that sold good old-fashioned cap guns,” he says, “so we opened our Internet store mostly for little boys like our son and for the parents and grandparents who love them.”

Armando chose to make his storefront on the Internet so that the Western toys could be widely available and easily accessible. Why bother driving around for the possibility that you may find something for your little marshals, chiefs and outlaws, when you can just surf for what you’re looking for on the web?

Save yourself some gas, and fuel up your little tot’s imagination with Cowboy Toys & More’s always-expanding selection of Western-themed toys.