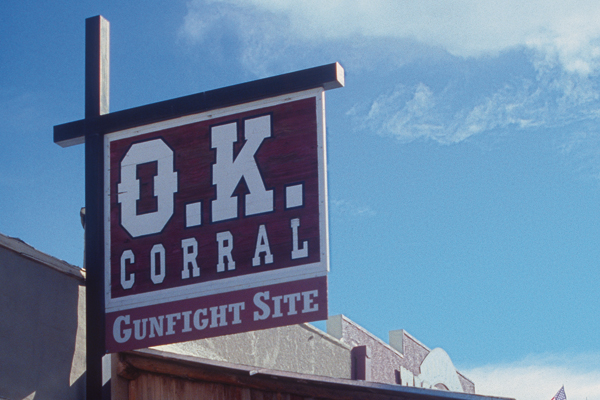 Heavily armed men are lying in wait for me when I pull into the Holiday Inn Express—enough to make me nervous.

I try to make it to my room unobserved, but a black-hatted hombre tracks me down and instructs me to mosey over to the lobby.

A Colt Single Action Army is a mighty good persuader. Which causes me to think:

I don’t mean Hugh O’Brian or Kurt Russell, but the bona fide Wyatt, whoever he was. Love him or hate him, no one ignores him 124 years after a 27-second set-to hurled three men into eternity and Wyatt Berry Stapp Earp into Western folklore.

Wyatt brings out more passion, and the historian, in all of us than any other Old West figure. I spent an hour in San Diego, California, talking to a man who had opened an Earp museum. In Parker, Arizona, a resident gave me tours of Earp’s old mining claims across the Colorado River in California. In Tucson, I listened to an impassioned Earp-o-phile berate my boss as an Earp hater. (“No,” I argued, “you’ve never heard him sing the Life and Legend of Wyatt Earp theme song.”)

And now I’m in Tombstone, waylaid by vigilantes.

My Earp trail starts in Needles, California. Actually, the real Earp journey begins in Monmouth, Illinois, where Earp was born in 1848, and continues all across the West before ending at Colma near San Francisco, where Earp’s ashes were interred in the Hills of Eternity Cemetery in 1929 (wife Josephine Marcus was buried there, too, in 1944).

An e-mail to the Needles Chamber of Commerce about any Earp sites goes unanswered. Well, Needles is better known as the hometown of Spike, Snoopy’s brother. Besides, this was brother Virgil’s territory. Virgil and wife Allie opened Earp’s Hall in the nearby boomtown of Vanderbilt. Virgil even ran for constable of Needles in 1893, but he lost.

Down the road in Colton, however, the Earps are anything but forgotten. In 1864, 16-year-old Wyatt joined his father’s wagon train from Pella, Iowa, arriving seven months later in the San Bernardino Valley. The Earps would continue to have a presence in the area.

Colton’s home of the Earp Society—a nonprofit group gung ho on preserving the Old West. Part of that preservation comes in the form of Wyatt Earp’s Old West Days every October, which is a worthy event for Earp-o-philes.

From Colton, Wyatt’s trail leads to Los Angeles. In the summer of 1865, young Wyatt drove a stagecoach between L.A. and San Bernardino, and Wyatt would have an on-again, off-again relationship with the City of Angels for the rest of his life. He peddled his life story around L.A. in the early 1900s, befriended William S. Hart and Tom Mix, and died in a rented bungalow downtown.

Any L.A. trip means heading over to the Autry National Center’s Museum of the American West and Hart’s retirement home, La Loma de los Vientos, in Newhall. But if you really want Earp country and Earp sites, visit San Diego, where the most famous photo of Wyatt was taken.

In style in San Diego

Wyatt spent many nights at the Horton Grand Hotel back when it was the Brooklyn Hotel. In the 1880s, the Horton—a replica of the Innsbruck Hotel in Vienna, Austria—served the elite while the Brooklyn housed the working class. In the late 1970s, both hotels were saved from demolition, moved brick by brick and stored in a warehouse until they were rebuilt as the Horton Grand Hotel in 1986.

The Horton remembers Wyatt, and so does the nearby elegant restaurant, Georges on Fifth. I dine in the room where Wyatt played cards (betting that Wyatt didn’t eat this well). Yet, my biggest treat is found at Gaslamp Books.

“My dad knew Bat Masterson in New York,” Ken Cilch tells me during a tour of his Wyatt Earp Room—billed as the largest collection of Earp memorabilia this side of Tombstone.

A book collector, Cilch became an Earp-o-phile and developed his shop into a Wyatt Earp shrine. He even published a book, Wyatt Earp: The Missing Years, San Diego in the 1880s, on sale at the shop.

“This is more hobby than anything else,” Cilch says. “I don’t try to compete with anyone, but I’ve had more fun doing this.”

Who can blame him? I’m ready to retire in San Diego, but it’s a hot drive across the desert into Yuma, Arizona.

Ah, what can be better than visiting Yuma’s most famous site, the territorial pen, now a state park, and one of the best Old West prison sites in the country?

Wyatt’s younger brother lived in Yuma awhile, and many believe Warren should have spent time in the prison. Warren probably wished he had, too, considering his fate in Willcox (he was shot dead in Willcox’s Headquarters Saloon in 1900). Earp-hater Pete Spence did spend a year and a half in the pen, and Earp nemesis John Behan lived here, too, but as a prison superintendent. Some say Behan should have been behind the bars. Of course, many say the same about Wyatt.

In 1897, Wyatt and Josie were in Yuma when they heard about the latest gold rush and headed north to Alaska.

I’ll head north, too, only toward Wyatt’s later stamping grounds, Harqua Hala (a ghost town) and Parker, Arizona, which will serve as a base camp for exploring Earp’s California mining claims.

The occupation listed on Earp’s death certificate is “mining,” and Earp tried to make a fortune in this desert. One of his last homes still stands in Vidal (it’s privately owned, but there’s a historical marker). Earp spent many of his later years around his “Happy Day” claims. In 1930—a year before Stuart Lake’s book, Wyatt Earp: Frontier Marshal, made Earp a household name—a post office was established near those mines, christened Earp. It’s still there. So are the mines, if you’re courageous or have a good guide.

Legend has it that Earp spent time at the historic Weatherford Hotel in Flagstaff, Arizona. After a day along the desolate California border, I know why. Flagstaff is cool, and so is the hotel John Weatherford built in the 1880s. Locals still gather at the lobby for coffee, and the bar is a rollicking little hangout. It sure beats the Route 66 motels.

From Flagstaff, it’s a short jaunt to Prescott. In the fall of 1879, Wyatt left Kansas to join Virgil and Allie here before heading to the silver boomtown of Tombstone. A run of luck at the faro layouts kept Doc Holliday in Prescott a bit longer.

If the Earps had hung their hats at Hassayampa Inn or dined at Murphy’s, they could have changed history by staying put. Alas, the Hassayampa didn’t open its doors until 1927, and long before Murphy’s became a restaurant, it was the circa 1890 J.I. Gardner mercantile. The legendary Prescott Frontier Days Rodeo could have kept them here, too. The Palace Saloon was around during the Earps’ stay, and visitors can still belly up to the bar for a refreshing beverage after visiting the exceptional Sharlot Hall Museum grounds.

From Prescott, I journey south to Scottsdale. All right, Wyatt never spent any time in Scottsdale, but any Westerner knows that while this city is known more for its art/golf/spa/resort scene than its history, it is home to Guidon Books (one of the West’s best bookstores) and La Hacienda (a Mexican restaurant Arizona Senator Barry Goldwater loved). Anyway, I need a break before moving to Tucson.

On November 27, 1879, the Earps stopped in Tucson, where Virgil was commissioned as a U.S. deputy marshal. A few years later, after Virgil had been crippled by assassins’ shotgun blasts and brother Morgan had been shot dead, the Earps stopped in Tucson to catch a train for California. Frank Stilwell was at the station, albeit not to see the Earps off in a friendly way. The Earps left. Stilwell stayed behind—his body ripped apart by bullets and buckshot.

Tucson, the antithesis of Phoenix, embraces the Old West (Old Tucson Studios has often filled in for Hollywood’s Tombstone). It’s both natural (Tohono Chul Park; Arizona-Sonora Desert Museum) and urban (DeGrazia Gallery in the Sun; Old Town Artisans), and it is host to one of the nation’s top rodeos (La Fiesta de los Vaqueros).

From Tucson, it’s on to Tombstone, via Benson and Willcox, which are both good base camps if you can’t find a room in Tombstone, which attracts 450,000 tourists a year. (FYI: Finding a meal in Tombstone after hours is dicey.) We wouldn’t be following Wyatt’s trail if not for Tombstone, so here I am.

And here are those gunmen.

They aren’t gunning for me as they’re merely members of the “Tombstone Posse”—a re-enactment group entertaining guests at the Holiday Inn Express, which has a “Town of Redemption” in the works (groundbreaking was set for August) on hotel property for talks, re-enactments and even 1880s-style weddings.

Packed with history, Tombstone’s also packed with tourists. Vendors hawk gunfights practically on the hour, including a re-creation of that deal near the O.K. Corral where Wyatt, Virgil and Morgan Earp, and Doc Holliday sent Billy Clanton and two McLaury brothers to their reward on October 26, 1881. Judging from the umpteen shoot-outs today, the town’s firearms ban is history.

Today, Tombstone’s under fire from the Department of Interior, which has threatened to revoke the city’s National Historic Landmark status for violating historic preservation building codes. There are authentic sites (Birdcage Theatre; Tombstone Courthouse State Historic Park) and a great museum (Tombstone Western Heritage Museum). You can walk the boardwalks, shop till you drop or take a stagecoach tour. And, of course, there’s the O.K. Corral.

Who can say if Tombstone’s feud between history purists (some of them are merchants) and make-a-buck business leaders will shape up to another Earp-cowboy clash. Just remember, this is the town too tough to die. It survived the Earps, the Clantons, the 1882 fire and the ups and downs of silver mining. As I walk along Front Street, I’m tempted to break out in song.

I’m no Bob Boze Bell or Shorty Long, but, c’mon, join me.

And long live his glory.

And long may his story be told.