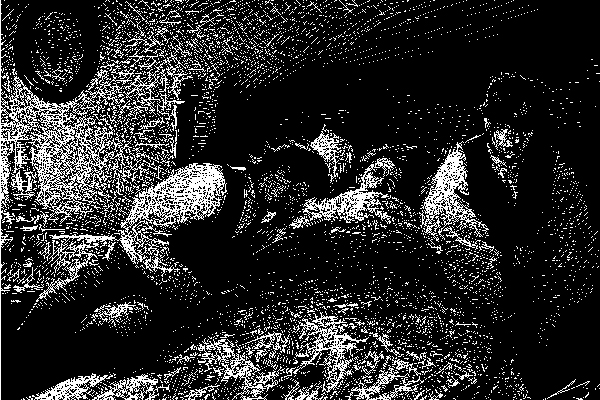 This is a unique moment in jurisprudence where law, history, legend, myth and modern criminology come simultaneously to the forefront in a single proceeding.”

Billy the Kid’s attorneys are speaking for him in a New Mexico court of law.

That a man dead 123 years even has attorneys—ones appointed by New Mexico Gov. Bill Richardson, no less—gives a powerful clue how consumed the 47th state has become over this case.

Attorneys Bill Robins and David Sanoval have joined a lawsuit to allow the exhumation of the Kid’s mother, Catherine Antrim, buried in Silver City. Her DNA would then be tested against the body buried in the Kid’s famous grave—a decades-old tourist attraction in Fort Sumner.

The case will determine, they note, whether the Kid was ambushed by Lincoln County Sheriff Pat Garrett the night of July 15, 1881, or survived “to live a long life in either Texas or Arizona,” as men in both states later claimed.

The answer to that point will also solve the dispute that launched a mountain of legal paperwork in the Sixth Judicial District Court: Was Pat Garrett an honorable sheriff who got his man, or was he a murderer who passed off another body for the outlaw who’d escaped from the Lincoln County Jail after killing two deputy sheriffs?

The officers soon found their efforts opposed by the Silver City Government, the Office of Medical Investigations and a woman whose sister is also buried in Memory Lane Cemetery.

As one observer put it, “Now that the lawyers are involved, we’ll never get anywhere.” A look inside the case shows why that’s probably right.

Silver City, a leader on the anti-dig side, is pleading that poor Catherine Antrim deserves “eternal rest.”

The pro-dig side quickly counters that the town itself moved her remains in 1882. Besides, the law officers argue through their attorney Sherry Tippett, “The town has no substantial, protectable, significant and direct interest in this matter … managing the cemetery does not provide a property interest in the body. Only heirs to Catherine Antrim have such an interest.”

Those claiming to be her heirs support the exhumation: Elbert Garcia of Santa Rosa, New Mexico (who says he’s her great-great grandson and has written the book Billy the Kid’s Kid: The Hispanic Connection), and Dr. Roman Mireles of Whittier, California, whose relationship to Catherine isn’t spelled out. Both reportedly “wish to provide DNA samples to compare with Catherine Antrim’s remains to establish lineage,” according to court records.

“In essence, this investigation was launched because there were too many unanswered questions regarding the alleged murder of Billy the Kid by Sheriff Pat Garrett,” according to the petition filed on behalf of the officers.

“Other than discovering the truth in this matter, and resolving these questions once and for all, the Petitioners have no stake whatsoever in this lawsuit,” the officers’ petition continues. “Rumor to the contrary notwithstanding, there is no book deal, no movie deal and no plan to sell tickets to the exhumation of Catherine Antrim.”

But Silver City Mayor Terry Fortenberry has intervened in the case “to prevent the unlawful, unnecessary and sensationalistic exhumation of Ms. Antrim.”

His attorneys, Thomas F. Stewart and Robert L. Scavron, verbally tear apart the intentions and logic of the dig: “The facts of this case demonstrate with shocking force that, petitioners’ rhetoric aside, this case is not designed to seek the truth. To the contrary, petitioners’ case has been based on deception, half-truths and confounded folklore from its inception.”

Besides, the mayor insists, “there is no real controversy that the person shot and killed by Sheriff Pat Garrett … was the notorious criminal Billy the Kid.”

Yet, two other men came forward decades later, claiming to be the “real” Billy the Kid: Brushy Bill Roberts of Texas and John Miller of Arizona. This suit seeks to prove them right or wrong, once and for all.

But as court documents reveal, the bedrock of this case could crumble on whether or not anyone knows where Catherine is buried. And if someone does, can the body be exhumed to collect DNA for testing?

Anti-dig lawyers say, and affidavits support their contention, that the answer to both questions is a resounding “no.”

Neither Catherine’s nor Billy’s remains can be located “to any reasonable degree of scientific probability,” state sworn affidavits by Dr. Debra Komar, forensic anthropologist with the Office of Medical Investigations, and Dr. Ross Zumwalt, director of the medical office.

“The burial site marked with Catherine Antrim’s name is Plot D-27 at Memory Lane Cemetery,” Dr. Komar notes. “This plot is the resting place of twelve other known individuals. In addition … present cemetery records list 276 other individuals known to be buried in the Memory Lane Cemetery but whose exact location … is listed in the records as ‘unknown.’” If that’s not bad enough, she adds, there are another 455 individuals buried in “unmarked graves” within the cemetery.

Even if they could be certain which body was Catherine’s, Komar and her colleague at the medical investigations office do not believe they could retrieve useable DNA.

The forensic scientist who headed the Jesse James exhumation in 1995 says he’s not so sure Catherine can’t be found or that her DNA wouldn’t be useable. Dr. James E. Starrs contends that far more information is needed to make this determination.

In the meantime, Joani Amos-Staats has intervened in the case because her sister was buried in Memory Lane Cemetery in 1989, not far from Catherine’s plot. Amos-Staats says she opposes the exhumation because it will disturb her sister’s grave site.

The attorneys for Silver City contend “the ‘truth’ of this matter is that petitioners are wasting valuable public and court resources in their effort to have a little ‘fun.’”

Meanwhile, the law officers who launched this campaign have filed a petition in Fort Sumner to open Billy the Kid’s grave. The town strongly opposes the move, and insiders report that everyone has “lawyered up” to fight the exhumation. Expect a repeat of the legal fight over digging up Catherine.

So this lawsuit continues. The judge is expected to rule in the next few months if Catherine’s exhumation will be allowed.

And this is just the start. Attorneys for Billy the Kid—the biggest allies on the pro-dig side—have their own motivations for wanting to know if the body in his grave is really the outlaw or some imposter.

As they told the court, they intend to seek a pardon from Gov. Richardson for Billy the Kid. The officers think the Kid deserves a pardon because he really wasn’t that bad a guy, and if it turns out he actually did live to be an old man, then he deserves a pardon for leading a long, law-abiding life. And that, in legal parlance, is having your cake and eating it, too.