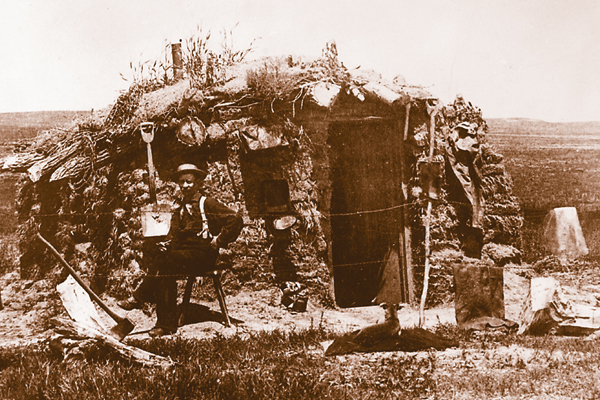 After recalling a sod house he’d seen at one of the stage stations between St. Joseph, Missouri, and Carson City, Nevada, in 1861, Mark Twain wrote in Roughing It, “It was the first time we had ever seen a man’s front yard on top of his house.”

Livestock often grazed atop sod houses, and women sometimes seeded flowers on the roofs to make their dirt homes prettier, but the romance ended there. Sod roofs leaked during rainstorms and occasionally caved in, while rats and snakes frequently dropped in unexpectedly.

Little house on the Plains

The sod house, or soddy, was prevalent on the Plains in the years after 1850 because the structure was a cheap shelter, built of easily obtained materials. One circa 1886 Nebraska soddy cost $13.75 and likely belonged to a “wealthier” family that could afford the lumber, tar paper and nails used in its construction.

Sod bricks, also called “prairie marble,” were cut from the ground and stacked grass side down. The 50-pound bricks’ joints were then chinked with mud. Walls were formed out of double sod stacks, which provided warmth during the winter and felt cool during the summer.

A typical one-room soddy, measuring 16-by-20 feet, had wooden door and window frames and windows made early on of isinglass, and later of glass. Grass roofs were often constructed by laying brush on rafters and then topping the wattle with sod bricks, while the floor was hard-packed dirt.

Cross-stitched samplers, curtains, patchwork quilt bedspreads and rugs made of cow and buffalo hides added comfort to the houses, especially for women settlers from the East, who were often stunned to realize that they would be living in houses made of soil. For furniture, trunks were transformed into benches and cupboards, while crates and barrels became chairs.

Living in a dirt house was inevitably dirty. To combat the filth, women covered the walls and ceilings in muslin that had to be removed and washed twice a year. Some also made wallpaper out of newsprint. Umbrellas were placed over stoves, sick children and newborn babies to protect them from falling dirt and vermin. Kerosene, oil and, on occasion, shotguns were used to ward off rats and other pests.

Sod house survival required some ingenuity, as shown in Joanna Stratton’s 1982 book, Pioneer Women. In Mitchell County, Kansas, Emma Brown recalled being left alone in her soddy in 1870 when her husband took a herd of cattle to Abilene.

Rain had washed out the roads and bridges during her husband’s trip, preventing him from returning home. Because her soddy’s roof leaked, Emma moved with her children to a neighbor’s dugout, finding shelter under some boards when the dugout eventually filled with water. After a day of sunshine, she returned to her own soggy soddy, but the rain followed her.

“I raised the leaves of the table and put the children to bed under it,” she said, “and there they slept as sweetly as healthy children sleep.”