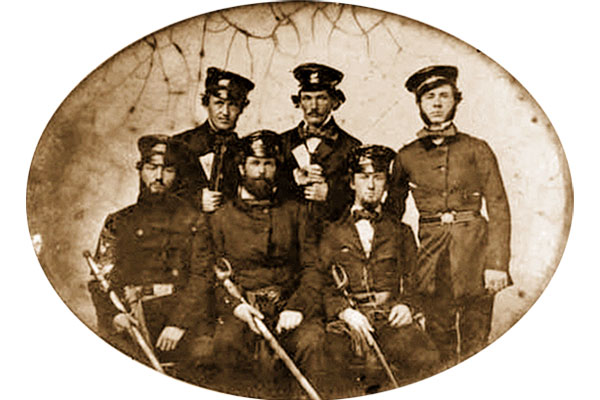 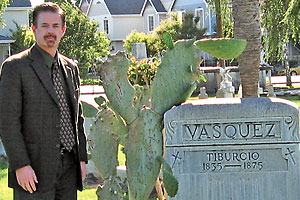 San Francisco-born John Boessenecker, who, as a boy, made annual vacation trips along this route with his family. His visits to Auburn, Virginia City and Placerville kindled his interest in the Old West. At the age of 15, he even sold his first article to a Western magazine.

He’s served California as a police officer in Mill Valley and San Mateo, and he began practicing law in the field of probate, trust and estate litigation after passing the state bar in 1985. California history is his passion though, and he has authored six books highlighting the state’s bandits and frontier lawmen, most recently the biography, Bandido: The Life and Times of Tiburcio Vasquez, which earned a Spur from Western Writers of America and the “Best Book” award from Wild West History Association. But rather than take you to the popular Vasquez Rocks, 40 miles north of Los Angeles and a frequent hideout of Vasquez, Boessenecker has tracked some other notable badmen on a Gold Coast loop that takes you through northern California and across the border to Nevada.

SAN FRANCISCO, CA
The Wells Fargo History Museum located at 420 Montgomery St. is the best express museum in the West, featuring two Concord stagecoaches, firearms and a Wells Fargo bank office. You can see the Henry rifle and Colt revolver carried by the famous Wells Fargo Detective James B. Hume, a close friend and supporter of the Earp brothers. You can also see authentic Wells Fargo express boxes of the type targeted by Black Bart, the West’s most prolific stage robber. The staff is very friendly and eager to answer questions.

Tadich Grill, on 240 California Street and established in 1849, is the city’s oldest restaurant. The fare here is Old San Francisco; the menu has changed little since the Gold Rush. The waiters wear the old-style white linen aprons and are notoriously abrupt with customers. San Franciscans love it and keep coming, generation after generation.

Next up, visit Mission Dolores at 16th and Dolores Streets. Father Junipero Serra established this adobe mission in 1776, and it is the oldest building in the city. It withstood the 1906 earthquake and fire when many modern brick and steel buildings collapsed and burned. In the churchyard is the grave of the notorious bare-knuckle pugilist and “shoulder striker” James “Yankee” Sullivan. It is marked with the inscription, “died by the hands of the V.C.” That means Vigilance Committee, not Viet Cong! He was picked up in 1856 when the vigilantes cleaned up San Francisco, and he died in their custody. Vigilante supporters claimed he committed suicide with a knife; Sullivan’s friends said a vigilante stabbed him to death with a sword.

VACAVILLE, CA
Peña Adobe, from the era of the Californios, is an authentically restored adobe ranch house and was the headquarters (or hacienda) for Rancho Los Putos of 10 square leagues granted in 1845 by Gov. Pio Pico to the Peña and Vaca families. The Peña Adobe, erected in 1842, is still owned by the descendants of the Pena-Vaca families. The nearby town of Vacaville was established in 1851 on land formerly owned by the Vacas.

NEAR DAVIS, CA
The Yolo Causeway’s “Long Trestle” was the scene of several notorious train robberies in the 1890s. Here, the Browning-Brady gang robbed a Southern Pacific train in 1894. They got $50,000 in gold, but it was so heavy, they buried it nearby. John P. Harms, known as “Carl the Tramp,” was camping in the brush and saw the robbers bury it. He dug up the loot and lived the high life in San Francisco for two years—gambling, drinking, escorting posh women and throwing grand dinners. He was finally arrested by Wells Fargo detectives, but he only had $12,000 left. This was an era when $100 a month was a high salary and a cowboy was lucky to get $30 a month. Harms served two years in prison for stealing from the train robbers.

SACRAMENTO, CA
California State Railroad Museum is the largest railroad museum in the West and features 19 steam locomotives dating from 1862 to 1944, including the famous C.P. Huntington, Southern Pacific Railroad Steam Locomotive No. 1. You’ll also see a full-scale diorama of an 1860s construction site high in the Sierra Nevada, as well as a bridge elevated 24 feet above the museum floor.

After your visit, I recommend Fat City Bar & Cafe at 1001 Front Street, long a favorite of politicians and legislators, and a great place for a meal or a drink. Then head over to River City Saloon for some 25¢ sarsaparillas.

ABURN, CA
Auburn was one of the most important towns of the Gold Rush. Next door to the fire station is a historical marker showing the spot where the notorious highwayman Rattlesnake Dick Barter was killed in a gunfight with lawmen in 1859. In that fight, Dick killed Deputy Sheriff George Martin before he was slain. The graves of Rattlesnake Dick and Deputy Martin can still be seen at Old Auburn Cemetery on 170 Fulweiler Avenue.

TRUCKEE, CA
The story of the Donner Party is one of the West’s most tragic. Stranded in the winter snow while crossing the Sierra Nevada in December 1846, their fateful journey ended in death and cannibalism as some of the survivors ate the bodies of the dead. Two-thirds of the men in the party perished, while two-thirds of the women and children lived. A total of 41 died and 46 survived. Visit Donner Memorial State Park and its Emigrant Trail Museum, which has displays and information about the Donner Party.

VERDI, NV
Just off I-80, near Verdi, between Hunter’s Crossing and Granite Hot Springs (Lawton’s), there occurred in 1870 the first train robbery of the far West. A gang of robbers led by “Big Jack” Davis boarded the locomotive in Verdi and then held up the train, fleeing with $40,000 in gold and silver coins. The entire gang was eventually captured, and the leader, Davis, after serving a term in the Nevada State prison, was shot to death during a stage robbery in 1877 in the high desert of eastern Nevada.

RENO, NV
In Reno, visit the Nevada-California-Oregon Railroad Depot Locomotive House & Machine Shop. The historic, two-story red brick depot was built in 1910, and the locomotive house and machine shop next to the depot dates from 1889. Also of interest is the Virginia Street Bridge, built across the Truckee River in 1905, replacing an earlier iron bridge.  According to Reno’s folklore, newly-divorced couples throw wedding rings from this bridge.

VIRGINIA CITY, NV
Mark Twain lived and worked in this silver mining town and made the town’s characters famous in Roughing It. The baddest gunfighters were called “chiefs,” and there were plenty of them: “Longhair Sam” Brown, Langford “Farmer” Peel, El Dorado Johnny Dennis, John Bull and “Big Jack” Davis. A fun place to have a drink or a bite to eat is the Delta Saloon, famous as the home of the Suicide Table (so-called because three previous owners were reported to have committed suicide because of heavy losses at the faro table). Another is the Bucket of Blood Saloon. The building was erected in 1876, and the place is filled with Old West artifacts.

CARSON CITY, NV
Nevada State Museum, at 600 North Carson Street, is a great place to see mining equipment artifacts from Nevada’s silver rush, as well as an original Gatling gun from the Nevada State Prison. Since the building was formerly the U.S. Mint, it also offers gold scales and coin making presses and equipment. You’ll also see a collection on Nevada’s gambling history.

LAKE TAHOE, NV
Head to South Lake Tahoe for a buffet meal. If you have time, take the paddle-wheelers Tahoe Gal or M.S. Dixie for a tour of the lake. When you drive back onto Highway 50, be sure to look to your left for incredible views as you climb out of the Tahoe basin. You are taking the very route to Placerville that the famous stage driver Hank Monk traveled on when he brought Horace Greeley to California on a wild ride in 1859, famously saying, “Horace keep your seat! I told you I would get there by five o’clock, and by God I’ll do it, if the axles hold!”

POLLOCK PINES, CA
A historical marker at Bullion Bend marks the spot where Confederate guerrillas robbed two coaches in 1864. They were led by Rufus Henry Ingram, rumored to have been with Quantrill’s guerrilla band. He came to California to raise a band of guerrillas in San Jose. His lieutenant was a ruffian named Thomas B. Poole, the former undersheriff of Monterey County. Poole had once hanged a Hispanic criminal who had already been granted a reprieve by the governor. After the Bullion Bend robbery, a posse shot it out with the gang. Poole was captured, and a deputy sheriff was killed. In one of the most ironic hangings of the Old West, Poole himself was hanged in Placerville.

PLACERVILLE, CA
Placerville, formerly known as Hangtown, was one of the most famous camps of the Gold Rush. Here, you can treat yourself to the Forty-Niners’ traditional delicacy, the Hangtown Fry. Hangtown fry may well be the first original California dish. It is an omelet made with fried oysters, eggs and fried bacon. In the Gold Rush, live oysters would be shipped to the mining camps in barrels of sea water after being collected in San Francisco Bay. A Hangtown Fry cost about $6.00, an exorbitant price in that era. Chuck’s Restaurant on Broadway has been serving it for nearly 50 years.

OAKLAND, CA
The Oakland Museum, on 1000 Oak Street, has one of the finest collections of pioneer artifacts and Western art masterpieces. Here are massive Sierra Nevada and Yosemite paintings by the landscape masters Albert Bierstadt, Thomas Hill and William Keith, and extraordinary California genre paintings of the 19th century by William Hahn and Charles Christian Nahl. For the gunfighter aficionado, you can see two pistols, a Smith & Wesson American Model and a Colt 1849 Pocket Model, carried by Sheriff Harry N. Morse, one of the great lawmen of the Old West, who captured stage robber Black Bart in 1883.

SAN FRANCISCO, CA
The historic Cliff House, at 1090 Point Lobos Avenue, offers spectacular views of the Pacific Ocean. Don’t miss seeing Seal Rocks and the ruins of the Sutro Baths next door. The Cliff House was first built in 1863, attracting wealthy San Franciscans who drove out in carriages to enjoy the food and coastal views. Its clientele later declined, and it became something of a dive. Adolph Sutro, a millionaire philanthropist and later mayor of San Francisco, bought the Cliff House in 1883 and cleaned it up. In 1894, the Cliff House was destroyed by fire and rebuilt. Ironically, it survived the 1906 earthquake and fire, but it burned down again the next year. Rebuilt in 1909, it is as popular today as ever.

PRIMM, NV
Right on the California-Nevada border is a small casino called Terrible’s (odd name). Terrible’s Primm Valley Casino Resort is the home of the famous Bonnie and Clyde death car.  Over the years since the deaths of Clyde Barrow and Bonnie Parker in 1934, several fake death cars floated around American fairs and carnivals, but this is the real one.  It can be viewed up close; every bullet hole put in it by the legendary Texas Ranger Frank Hamer and his posse can plainly be seen.