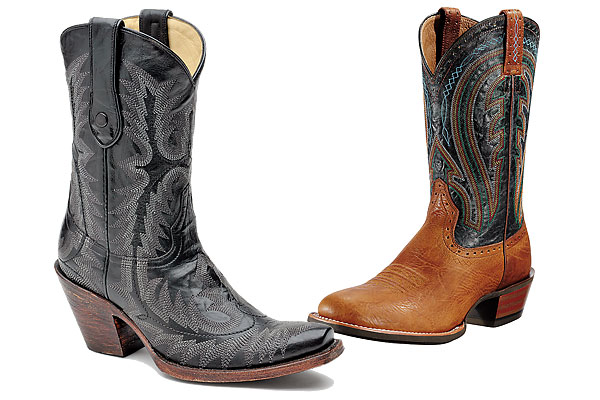 “These boots are made for walking, and that’s just what they’ll do.

One of these days, these boots are gonna walk all over you.”
–”These Boots are Made for Walking”
by Lee Hazlewood

Singer Nancy Sinatra’s breakout hit in 1966 was with Lee Hazlewood’s song, “These Boots are Made for Walking.”  In the song, she’s a tough cookie threatening to turn heel on a heel with whom she’d been head over heels. Her boots are made for walking, and they’re probably not traditional cowboy boots.

Cowboy boots, originally, were not made for walking. They were made for “cowboying,” that is, riding a horse. The tall, underslung heels—known as a “Cuban heel”—keep a rider’s foot from slipping through a stirrup. They also change the posture and affect the gait of person wearing high-heeled boots. If you watch a buckaroo walk in boots with 2½-inch heels, he’ll have a slight roll in his gait. Or he’ll have an exaggerated swagger, if he’s walking like John Wayne.

The basic boot or shoe heel’s function in walking is to support the heel bone in the foot when the foot strikes the ground. Depending on the materials used, the heel can also cushion the heel bone. The height and diameter of the heel is also a factor in the balance of a boot, podiatrists say. As a footnote, the heel slippage you experience inside a cowboy boot is due more to the metal shank positioned in the sole under the arch of the foot. The boot doesn’t flex there, but your foot does inside the boot, so your heel rides up naturally.

Various bootmakers offer many of the same assortments of heels on their boots, with varying heights, angle cuts and names.  By one estimate, cowboy boots can come in 13 different types of heels!

The lowest heel found on cowboy boots is on ropers, which are usually about one-inch high with little or no angle. This allows a calf roper to dismount quickly from a horse with less chance of turning an ankle because of a higher, narrower heel. Any heel of any height that is not cut at an angle from the base or “cap” of the heel to the top is generally known as a block heel.

The next highest heel—and the most widely sold today—is a 11?8 to 13?8-inch heel with a slight pitch (no slope at the back) and is generally referred to as a walking heel.

Boots with no heels—usually made from a rubber compound known as “crepe,” have been a popular walking boot for cowboys and civilians looking for a comfortable, highly cushioned walking boot.

Your choice of heels on your boots can indicate your use of that boot, but it can also be a reflection of your personal style or simply just comfort. Higher heels do add height to the wearer—which may be a goal for some. Be sure to walk and stand in boots with different heels and heel heights. You’ll be amazed at not only how a different heel can change your posture and your gait, but your whole attitude.