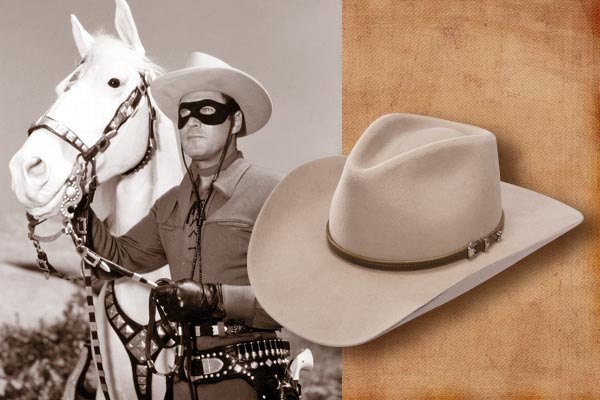 Despite the television show’s invitation to return to “those thrilling days of yesteryear,” The Lone Ranger of the 1950s depicted times, places and things as they never were.

The mask alone would have earned the Texas Ranger, John Reid, a necktie party by one vigilance committee or another in the Old West. As for the rest of his ensemble, that powder blue leisure suit would have gotten actor Clayton Moore, who played the Lone Ranger, laughed off the frontier. Likewise, his pinched-front felt hat—essentially an oversized nearly white fedora—was directly out of central wardrobe. Will Rogers would have raised a skeptical eyebrow.

The crowns of most felt hats from the 1800s—like J.B. Stetson’s popular Boss of the Plains—were too soft and low to take and hold that shape. The best-selling J.B. came in natural mottled-grey beaver fur, with a four-inch unshaped or “open” crown and a flat four-inch brim stiffened with shellac. Simple and efficient. Moore’s Lone Ranger hat was dyed to silver belly. His triangular Tycoon crease required at least a six-inch crown; the four-inch brim had a pencil roll. A matched color one-inch grosgrain hatband and a braided leather stampede string finished the look.

Despite—or perhaps because of—the inaccurate depictions rampant  in Western movies, the hats worn by the heroes and villains have always resonated with fans. Nearly every  kid growing up in mid-20th century America  wanted to be a cowboy. They didn’t necessarily distinguish between the Lone Ranger’s Tycoon crease and, say, the similar—but more complicated—Association/Slope crease worn by Roy Rogers. Both hats featured pinched fronts and crowns that sloped to the back. Rogers’ slope was steeper, with a double teardrop crease and a sharper front pinch.

Typically, a hat in the Old West just showed dents and dips from the way it was handled by its owner and how much weather it saw. Side dents appeared as the wearer picked the hat up by its crown—slightly pinching the front sides with his thumb and index finger. The dipped brim came from snugging the hat down by the brim when protecting yourself against wind or when rain ran off it. Such inadvertent shapes added character and were eventually copied, exaggerated or refined by admirers of the hat or its wearer. Hat makers eventually built those shapes into hats.

Disney’s version of The Lone Ranger, out this summer, tips its immaculate silver Tycoon hat to the real Old West by getting the masked man out of that tight, lace-up pullover and into a period-correct morning jacket and waistcoat. His hat is faithful to “Kemo Sabe’s” original style—if not to the frontier era.

Whether you are the weathered frontiersman type in an unshaped J.B., a prosperous banker in a Victorian bowler, a contemporary cowboy sportin’ a Cattleman crease or a ginned-up Hollywood cowboy in a splendid sombrero, you will discover that if a hat is iconic, it’s authentic, no matter what Will Rogers said.