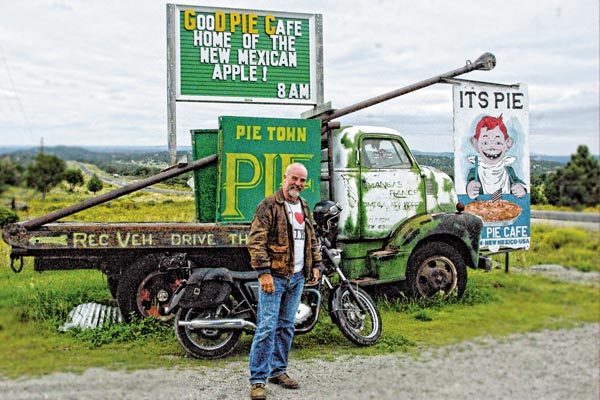 It’s the night before the annual pie festival in the aptly named Pie Town, New Mexico, and Michael Rawl is still inside the Good Pie Café, chatting up customers, cooking their suppers and baking pies for tomorrow’s big day.

Located on the Continental Divide along U.S. 60 about 83 miles west of Socorro, Pie Town boasts, locals say, a population of about 65. They must all love pies because the ranching town has two cafes, Rawl’s place on the west end of town, south side of the highway, and Kathy Knapp’s Pie-O-Neer café on the east end, north side (in case you get hungry before you get out of town).

On the second Saturday of September, Pie Town brings in scores of pie lovers from across the country for the “Pie Festival,” a fund-raiser for the all-volunteer Pie Town Community Council.

Among the vendors, you will find folks competing in horned toad races (you have to catch your own toad), but this event, held since 1980, is about pies. Pie sales. Pie judging. Pie eating (where kids get whipped cream on their faces and adults get fatter).

They must be because she and five or six other volunteers have spent two days making 200 pies to sell whole or by the slice during the festival.

The big draw is the pie contest, featuring “fruit,” “nut” and “other” categories. Adult and youth contestants bring their pies to the site between 9 a.m. and 10:30 a.m. No pies requiring refrigeration (dairy, cream, meat) are allowed. Even along the Continental Divide, the Health Department is law. Grand prize is $100, with the winning pie auctioned off.

Ten-year-old Briano Copelan has placed third in the youth category for a peach and berry masterpiece. Unfortunately, it’s all gone by the time I catch up.

How did it taste? I have to know.

“I didn’t get to taste it,” Briano says. “Well, I got to lick the sugar off my hands when I was making it.”

I need to get a volunteer job judging this contest. Judges get to taste plenty of pies, which is why graphic designer Marc English drove his motorcycle from Austin, Texas, and landed a judging job.

“Some tasted fantastic but looked like heck,” English says. “Some looked great, but didn’t have the taste. But a couple of the kids’ pies were absolutely delicious.”

Just how far is it from Austin to Pie Town? After checking his notebook, English tells me, “5,369.8.”

I tell him that the aroma of that Pineapple Upside-Down Pie hasn’t clouded my knowledge of U.S. geography.

English explains. He hit the road for Nevada, Big Sur and every great pie joint he could find. “To get here,” he says, “I left Yosemite at two a.m.”

Pie Town brings them all in. Take Rawl, back at the Good Pie Café, still serving, baking and smiling. Thirty years ago, he was in Manhattan, then he moved to Pie Town, opened the café, sold it and missed it so much, he bought it back a year later.

What makes Pie Town so special?

“I can cook at home,” he says. “It’s the people you meet. And you get to live in Pie Town. It’s like some kind of weird dream.”

Or, as pie contestant Josh Schachter of Tucson, Arizona, says, “It feels like a slice of America.”