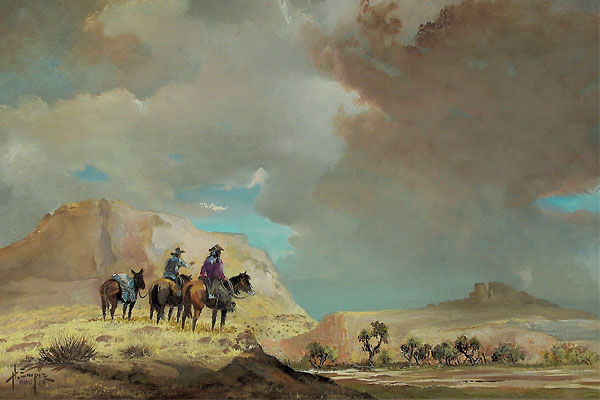 Being a native of Arizona has always been considered rare.

For Hal Empie, who was born outside of Safford in 1909, while the territory was still fighting for its statehood, this advantage gave him plenty of time to gain an appreciation for the area’s history and landscape.

He grew up in an adobe home on the open frontier. He used to say he came into this world with his artistic talent, having drawn a mural on his school building with a stick of chalk at the age of five.

As the years wore on, Hal had to let his art rest aside while he studied pharmacy. He moved to Duncan in 1934 and opened the Art Gallery Drug on the bustling main street. This small town was home to 500 residents. Some outliers on nearby farms and ranches also depended on the store, since it was the only one in the area for miles.

Despite the full-fledged pharmacy he was operating, Hal continued his true passion of painting the scenic backdrop of Arizona’s terrain. He hung his art on the walls of the store.

He was more than just a painter though. Hal was a sketch artist, illustrator and a cartoonist. His small town provided many loyal fans from the very beginning, including former Supreme Court Justice Sandra Day O’Connor, who grew up on a cattle ranch and frequented the store—not merely for a root beer float from the soda fountain, but for the atmosphere as well. Her parents would occasionally spare some change to buy her Empie Kartoon Kards, which have since become collector’s items today.

Unfortunately, a flood in 1978 destroyed the store. But out of the ruin would come many a masterpiece.

Hal moved to Tubac, where he focused on painting; every week, he produced a piece of artwork that reflected the spirit of the Southwest. Inspiration came from Hal’s heart and head, which were born in the desert that he painted. He did not believe in taking a picture and trying to re-create that snapshot. In his opinion, photography was its own medium.

What remains of his 6,000-piece collection is hanging in the Hal Empie Studio & Gallery in Tubac. The rest has been sold to many fans outside of the small town where it all began.

Hal passed away in 2002, at 93, having used his paintbrush daily to depict Arizona’s landscapes. His vision will exist within those colorful paint strokes for many more years to come. As Arizona celebrates its centennial birthday, it is clear why he was considered the oldest continuous artist in the state.