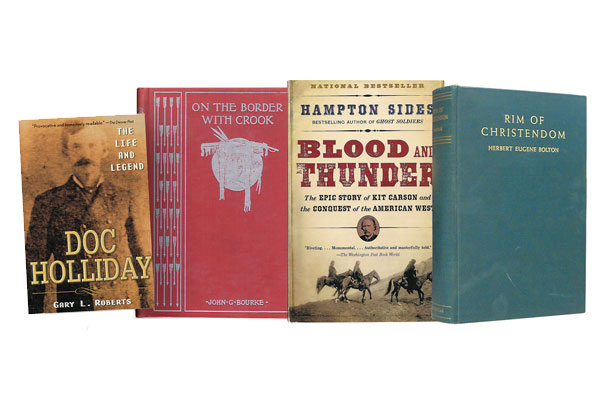 Your must-have books on Arizona history!

1. Vanished Arizona: Recollections of the Army Life of a New England Woman by Martha Summerhayes

Written by the wife of an Army officer stationed in Arizona from 1874-78, Vanished Arizona provides a clear picture of life on the frontier and the hardships faced by both the men and women. The book was originally published in 1908, but quickly went into a second edition in 1911 ($75). Over the years, various publishers have reprinted the book, including these special editions: a Lakeside Press Classic in 1939; Arizona Silhouettes edition with notes by Ray Brandes in 1960; and most recently by the University of Nebraska Press as a Bison Book paperback ($15.95) with an introduction by Dan Thrapp.

2. Arizona Place Names by Will C. Barnes
Barnes received the Medal of Honor for his actions in Arizona against hostile natives and went on to become a rancher and writer. He collected Arizona place names from the state’s pioneers, Indians, ranchers and even historians. The original volume, published by the University of Arizona as a General Bulletin in 1935, a year before Barnes died, is an alpha listing that included the place name’s county, location on a map, origin of name and the year the post office was established. Although Barnes tried to corroborate each entry, some errors were noted. Byrd Granger revised and enlarged Arizona Place Names, dividing the entries by Arizona counties and printing it in an oversize format. The University of Arizona has reprinted the original Barnes edition with a foreword by Bernard L. Fontana ($25).

3. Arizona: A Panoramic History of a Frontier State by Marshall Trimble
This is the first book published by Arizona’s State Historian and was the best comprehensive history of the state, covering topics such as the Hohokam, Spanish entrada, fur trappers, transportation, military encounters with native tribes, mining, ranching and damming the rivers.  In the 1977 Doubleday release, with a foreword by Barry M. Goldwater, Trimble also included lists of Arizona’s political officials, such as territorial and state governors and members of Congress. This book can be found in used bookstores ($27.50). Thomas E. Sheridan’s Arizona: A History should also sit on the bookshelf with Trimble’s work.

4. Doc Holliday: The Life and Legend by Gary L. Roberts
The facts and lore of Wyatt Earp, the gunfight at the O.K. Corral and Tombstone are both a popular destination and a source of endless reading and viewing material.  Roberts’ book on Doc Holliday, published by John Wiley & Sons in 2006, provides an in-depth look at the man who was known as a “mad, merry scamp” or a “dangerous man.” After Roberts spent more than two decades of research and discovering new primary sources, Doc Holliday became the seminal tome on this Western gunfighter. The book is still available in trade paperback ($18.95).

5. Lazy B: Growing Up on a Cattle Ranch in the American Southwest by Sandra Day O’Connor and H. Alan Day
Not only does this book provide a look at ranching in the 20th-century Southwest, but it also lets us look at the early life of one of Arizona’s most significant women, Sandra Day O’Connor, the first female justice on the U.S. Supreme Court.  Written by Justice O’Connor and her brother Alan Day, the two recount their adventures, cattle drives and praying for rain on the Lazy B. The book is available in paperback ($16.95) and hardcover ($24).

6. On the Border with Crook by John G. Bourke
In his book, Capt. John Bourke recounts his experiences with Gen. George Crook during the Indian campaigns on the Plains and in the Southwest. Besides his own reminiscences, Bourke includes reports and letters documenting in great detail the events that transpired. This book, along with Crook’s autobiography and Dan Thrapp’s The Conquest of Apacheria, will provide the reader with an understanding of military conflicts in 19th-century Arizona. On the Border with Crook is available as a Bison Book from the University of Nebraska Press ($26.95).

8. Rim of Christendom: A Biography of Eusebio Francisco Kino, Pacific Coast Pioneer by Herbert Eugene Bolton
The impact of Father Kino on Arizona history is immeasurable—he is one of Arizona’s figures in Congress’s Statuary Hall. Kino helped lay the foundation for dozens of cities and towns as well as introduced new crops and livestock in the Southwest. This biography of the 17th-century Jesuit missionary is told by one of the most important Western historians, Herbert Eugene Bolton, who spent years researching archives in both America and Europe. Copies of the book can be found in used bookstores ($50).

9. A Little War of Our Own: The Pleasant Valley Feud Revisited by Don Dedera
What history of the American West would be complete without a story of a range war? Arizona had the Grahams and the Tewksburys’. Dedera’s Little War, with a foreword by C.L. Sonnichsen, goes beyond the work of Earle R. Forrest’s Arizona’s Dark and Bloody Ground or Zane Grey’s To the Last Man. Dedera spent more than 30 years researching this tale. Although this book has long been out-of-print, it can be found for sale in either paperback or hardcover ($90).

10. The Shape Shifter by Tony Hillerman
The Grand Canyon state is known for its natural beauty, diversity of population and settings for great stories, nonfiction and fiction. What better way to end a list of notable books than with Hillerman’s last novel, The Shape Shifter, which uses all these elements, plus mystery and murder. The book is sold in hardcover ($26.95) and paperback ($9.95).

Shelly Dudley is the historical consultant and manager at Guidon Books, located in Scottsdale, Arizona, since 1964. Visit Guidon.com or call 480-945-8811 to see which Old West books are available.