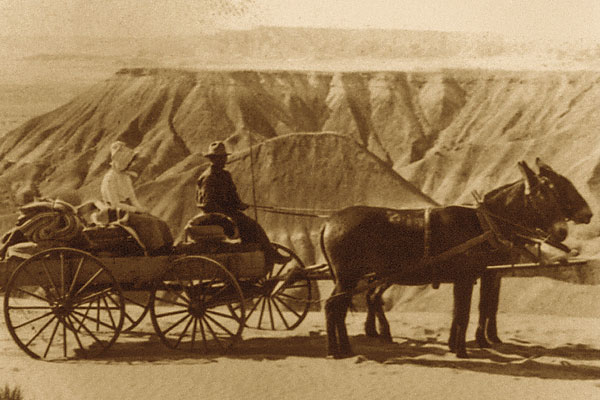 It’s hard to believe, but it was here, off Interstate 40 at milepost 325—in the middle of nowhere—that Arizona’s road to statehood really began.

I mean, on December 29, 1863, there was no town of Chambers. No Holbrook, and certainly not I-40. Just desert, and the group that stopped here probably couldn’t see much anyway on account of a raging snowstorm. Honest Abe Lincoln had signed the law in February that created the Territory of Arizona, separating it from New Mexico Territory, but you know how politicians and bureaucrats are. It took them 10 months before new territorial officials reached Arizona, and here, at Navajo Springs, they took the oaths of office.

According to this historical monument, these men established a “government whereby the security of life and property will be maintained throughout its limits, and its varied resources be rapidly and successfully developed.”

Then they proceeded on to the capital. There wasn’t a whole lot to do in Navajo Springs. There still isn’t. So let’s get this Renegade Roads moving.

Of course, the Navajos were here before the other settlers, so let’s pay tribute to these Arizonians by heading north.

In Ganado, swing by Hubbell Trading Post National Historic Site. John Lorenzo Hubbell—who bought this post in 1878 and eventually, with his family, owned 24 posts—has been credited with influencing Navajo rug weaving and silversmithing. And, yes, you can still shop for Navajo rugs and jewelry.

Then it’s up to Chinle and Canyon de Chelly National Monument, one of the most breathtaking spots in Arizona. For all its scenic glory, the canyon also played a tragic part in Arizona history. In 1864, Kit Carson brought the Army’s “scorched earth” policy into the canyon, burning hogans, destroying crops and forcing the Navajo to surrender. Many would be marched to Bosque Redondo in New Mexico. Many would die before the Navajos were allowed to return to their homeland in 1868.

If you haven’t seen enough holes in the ground, let’s head over to the Grand Canyon—277 river miles long, up to 18 miles wide and a mile deep. Almost five million visitors come here each year, so expect a crowd.

Fewer visit Williams, and that’s too bad. Named after mountain man Bill Williams, the town showcases the Old West, Route 66 and the scenic wonder. Of course, it’s also home to the Grand Canyon Railway, which offers vintage train excursions to the mother of
all canyons.

But back to Arizona’s road to statehood. Tucson thought it was a shoe-in as the territorial capital, but the new guv, John Noble Goodwin of Maine, had other ideas. After all, this was during the Civil War, and Tucson had plenty of Southern sympathizers.

Prescott ended up getting the nod, and this town gets my vote any day.

Goodwin and his party arrived at Fort Whipple in the Chino Valley in January 1864, and they set up a temporary capital there. That May, the fort moved about 20 miles southwest, and the capital was established at a new townsite dubbed Prescott. It was named after William H. Prescott, who wrote the 1843 book, The Conquest of Mexico. I guess Goodwin wanted to rub it in the Mexican’s faces, since this was once part of good old Mexico.

But you gotta love Prescott, from Whiskey Row and the Palace Saloon—which once served drinks to Doc Holliday—to the outstanding history collection at Sharlot Hall Museum. The original governor’s mansion, once the museum’s home, stands in restored glory where it was built in 1864. Add the art collection at the Phippen Museum and the Indian exhibits at the Smoki Museum—not to mention the Prescott Frontier Days rodeo—and you could just celebrate Arizona statehood here all year.

But then you’d miss Wickenburg.

This town offers dude ranches galore, shops, galleries and a great museum (Desert Caballeros). Guided tours can
be scheduled at Henry Wickenburg’s 1863 Vulture Mine, or you can take a self-guided walking tour through the historic town. Don’t worry. If you get out of line, the cops won’t chain you to the Jail Tree.

Nor will they lock you up at the Yuma Territorial Prison State Historic Park down in Yuma. It began taking guests in 1876 and continued housing convicts for 33 years, until Florence took over as the territorial pen. I can’t think of a Western prison more famous than Yuma. Nor can I think of a worse place to be sentenced to (and I’ve spent time—as a reporter, of course—in Huntsville and Angola).

Tucson, on the other hand, is a place I’d love to be sentenced to.

Before stopping there, swing by Picacho Peak, site of the westernmost Civil War skirmish.

Yes, Tucson would finally get that territorial capital, wresting it away from Prescott in 1867 (the Civil War being over, and politicians having short memories). It’s home to one of the most famous movie sets this side of Hollywood: Old Tucson Studios (think Rio Bravo and the original 3:10 to Yuma), and one of the greatest literary festivals this side of Washington, D.C. (the Tucson Festival of Books, on March 10-11, at the University of Arizona). You can catch up on Arizona history at the Arizona State Museum, the Arizona History Museum and the Fort Lowell Museum.

Heading south, you can learn to appreciate Arizona before the Gadsden Purchase of 1853 added Tucson and the area south of the Gila River to the United States. About nine miles south of Tucson, Mission San Xavier del Bac, the “White Dove of the Desert,” was founded by Father Eusebio Kino in 1692. The church, completed in 1797, is the oldest intact European structure in Arizona.

Then there’s Tubac, established as a presidio in 1752, but today it’s a hub of art galleries, restaurants and live music. Tubac Presidio State Historic Park, Arizona’s first state park, is still open to history buffs, thanks to community volunteers and the Tubac Historical Society.

One final stop, north of Nogales, is worthwhile, as you’ll learn about Arizona’s Spanish Colonial days. Tumacácori National Historical Park protects the mission ruins of Tumacácori, Guevavi and Calabazas. While you’re in Nogales, see if Paul Bond, a legend in his own right, will fit you for some custom boots.

Now let’s get to the really Wild West.

Grab a great ice cream in Benson, and, before you hit Tombstone, stop in at Tim Trask’s art studio, Gallery of Dreams, in St. David. His bronzes of Wyatt Earp and other key Western figures are excellent.

Tombstone, which was never an Arizona capital, is likely the most famous Arizona burg, thanks to a half-minute gunfight that was not at the O.K. Corral. But you can’t tour Arizona and not hit Tombstone. Despite tourists galore and more staged shoot-outs than even at Old Tucson Studios, it’s a fun town to visit.

So is Bisbee (Bisbee Mining & Historical Museum). So is Douglas (Slaughter Ranch Museum). So are the Chiricahua National Monument (near Willcox) and Fort Bowie National Historic Site (near Bowie).

The Petrified Forest National Park near Holbrook is another scenic wonder in the Painted Desert. You have to wonder why Guv Goodwin and his gang didn’t stop here to have their ceremony. Maybe they thought Duke Mantee was hanging out. (That’s a joke that’ll likely go over many heads.)

But if you’ve never seen 1936’s The Petrified Forest, and that introduction to Humphrey Bogart—“This is Duke Mantee, the world-famous killer … and he’s hungry!”—shame on you.

Or why didn’t Goodwin’s group stand on a corner in Winslow, Arizona? Oh, I know. La Posada Hotel wouldn’t be built for the Santa Fe Railway until 1929. But it’s around now, and it’s definitely worth a stop.

Now I’m in Flagstaff, a good place to set up base camp for a few days and discover more Arizona treasures, like the natural wonders of Walnut Canyon and Sunset Crater Volcano. Or the wonderful exhibits of anthropology, biology, geology and fine art at the Museum of Northern Arizona.

It’s also a good jumping-off point for day trips to Sedona and Oak Creek Canyon. You can check out the great mining town of Jerome, visit Fort Verde State Historic Park or go back further in time at Montezuma Castle and Tuzigoot National Monuments.

Eventually, of course, you’ll want to visit Payson to see Tonto Natural Bridge, the Rim Country Museum and the replica of Zane Grey’s cabin at the Zane Grey Cabin & Museum. Grey wrote some 60 Western novels, 13 set in Arizona’s Rim Country. I’ve been able to finish only two of his novels, The Drift Fence and Riders of the Purple Sage, and let’s hear an Amen! for audiobooks. But Grey still sells tons of books.

North of town, Pioneer Arizona Living History Museum houses 90 acres of an 1800s town with many historic buildings. My favorite? The opera house from Prescott where Lily Langtree once performed.

Prescott would resume its capital status in 1877, but Phoenix finally got the title in 1889, and it has gotten just about everything (mostly a zillion people) ever since.

Under no condition should you bypass the Heard Museum. This amazing collection of Indian heritage, culture and art opened in 1929, and it plays host to the world championship hoop dance contest (February 11-12) and the Heard Museum Guild Indian Fair and Market (March 3-4).

Since we’re talking statehood, the Arizona Capitol Museum is a must. As they like to say, “Discover how Arizona became a state in the building where it actually happened!”

Technically, it happened in D.C. On Valentine’s Day 1912, President Taft signed the proclamation that made Arizona a state. Film crews recorded it, marking the first filming of a president signing a law.

Arizona—100 years old! That’s worth celebrating. I wonder if Bob Boze Bell will buy me lunch in Cave Creek.

To get you in an Arizona mood, Johnny D. Boggs recommends reading Diamond in the Rough by Marshall Trimble, watching 1950’s Broken Arrow and not speeding through Show Low.