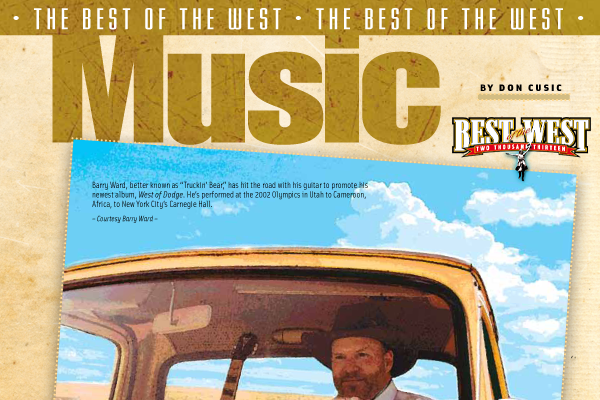 More Western music is being recorded and performed today than at any other time, but the question is: Who is listening? For the most part, Baby Boomers, many of whom deem a performer “authentic” only if his or her music reaches back to the Singing Cowboy film era.

I believe Western music will live on and can even thrive, but it won’t be joined at the hip with Gene Autry and Roy Rogers. The future lies in Western singers and songwriters blending the sounds of Acoustic and Country. One reason Acoustic music is popular in today’s Western music scene is because it fills our need for the human touch in this high-tech, social media world.

Bob Dylan once sang, “He not busy being born is busy dying,” and that is the challenge for Western music. Ralph Waldo Emerson once wrote, “If the single man plant himself indomitably on his instincts, and there abide, the huge world will come round to him.” That is the hope for the future of Western music. —Don Cusic

How a full-time Wyoming rancher finds the time to write such in-depth cowboy tunes is a mystery. Daron Little’s album Ranch Cowboy Music is exactly what the title indicates—the authentic, gritty, down-in-the-dirt stuff that the real cowboy life is all about.

Tired of the Nashville grind, Terry Brown has come home to put out a professionally-produced, Country-sounding album titled It’s a Cowboy Thang. Country music star Aaron Tippin helps out on one song, along with some more of Terry’s Western music pals.

You’ll be certain that J Parson has ridden a trail or two himself after listening to The Outlaw Trail. His awareness of the oftentimes less-than-glorious life of a cowboy is evidenced in lines like: “He may have come out west from a home across the sea; been a plowboy’s son on the farm in Tennessee. His daddy may have been a slave set free by the way; but he’s just a cowboy, nothin’ more.”

Marty Robbins influenced? Or just a unique beautiful voice? You can decide for yourself as you listen to James Michael’s album Beyond the Divide, which reached #1 on The Western Way Magazine’s Cowboy/Western chart last summer.

This Tucson-based group released its new album, Saddle Sore Blues, that features some strong songs written by the lead singer, Tom Poley. These guys do “bare bones” better than anyone.

You will find a lot of fun on Dancin’ in Denver. Along the way, Patty Clayton pays tribute to the Paniolo (you might expect that from someone who spends about half her time in Hawaii). Her song “My Heart Beats for the Boogie” will have everyone swingin’.

Gone West is one of the best-produced independent-label Western albums of the year. L.K. Potts’s intriguing voice pulls the listener into each one of his self-penned tunes. Black Bart songs seem to abound these days, and one of the best is found on this album.

Don’t say anything bad about David John and his Comstock Cowboys if you’re up in the Carson Valley of northern Nevada. They practically own that area when it comes to Cowboy, Western or Country music. The latest album, Songslinger, is an enjoyable mix of songs displaying their versatility and David John’s unmatched vocals.

If you like your music with an old-timey sound, Skip Gorman gave us a follow-up album to A Herder’s Call, which, by the way, was true to its subtitle, “Lonesome Old Time Songs & Tunes of the Range & Ranch”—some of them are just downright pitiful, folks. Fiddles in the Cow Camp will appease fans of old-time fiddle tunes. This is pure Old West stuff.

The Gang, Chandler’s 2012 album, exudes the warmth and fellowship you would expect when old friends get together to play music. Somehow this album manages to make its listeners feel like part of the gang too.

Country & Western is a term no longer used commercially in music. However, it best describes Joni Harms’s latest album, Harms Way. Featuring a duet with Joni’s daughter, Olivia, this album appeals to a wide audience.

With the release of Tennessee Local, Carolyn Martin has secured her position on the top rung of Western Swing music. Produced by her husband, Dave, this album would make Bob Wills envious.

In Rodeo Heaven, Brenn Hill’s newest album, you can sense the relief he feels after the positive diagnoses his son Briggs has been receiving regarding a life-threatening disease. Not a traditionalist, Hill creates music that is edgy, creative and cowboy all the way.

Western music is in safe hands if the songs of this ranch wife are any indication of its future. Trinity Seely’s new self-titled album is full of real cowboy life while, at the same time, she touches on lots of solid Western history. These songs are carefully written and edited, and they will provoke within any listener an interest in the true West.

Keeping alive the tradition of stacked harmony cowboy singing in the style of the Sons of the Pioneers, the English Brothers released its latest album, Livin’ the Western Way. This is a compendium to show up-and-coming Western groups how to “do it right.”

Borrowed Time, the latest offering from the 2008 Academy of Western Artists Male Vocalist of the Year, displays some of the most intriguing Western tales you’ll find anywhere. And no one sings them like Jim Jones. A good Western movie script could be written from any one of the songs on this album.

“Bluegrass Gal Grows Up on Marty Robbins” could be the headline for a story on Cindy Smith. However, if you listen to her new album, Cantinas, Lies, & Dead Cowboys, you won’t have to read the story.

Although you may not have heard of Bill Barwick, if you’ve watched the Encore’s Westerns Channel, you have heard him. His voice has been pre-announcing programs and singing jingles since the channel went on the air. Barwick’s new album, The Usual Suspects, brings you Pat Garrett, Wyatt Earp, the Dalton Gang and other characters of the Old West. This is the most true Western album released all year.

FROM THE WESTERN MUSIC HALL OF FAME:

RIDERS IN THE SKY

This Country & Western veteran hasn’t lost a step musically as his latest album,  Dreamin’ of … When the Grass Was Still Deep, evidences. Mike Blakely’s well-written “Charlie Siringo” will inspire you to read up on the frontier lawman’s history while you hum the tune, and Red Steagall, per usual, tosses in a couple of poems for fans of cowboy poetry.

Campfire on the Road features Murph in an informal, around-a-campfire setting that produced what feels like a purely spontaneous concert. It’s Murphey at his best!

The featured songs on this new album by Rex Allen Jr., titled Other Voices, are the original songs “Ruidoso” and “Bullets in the Gun.” His revival of Johnny Cash’s “Don’t Take Your Guns to Town” is as poignant as the original, and Allen Jr.’s interpretation of the Eagles’ “Peaceful Easy Feeling” has turned it into a true cowboy tune.

The true “Last of the Silver Screen Singing Cowboys” and one-time lead singer of the original Duke Ellington Band did not record this year; however, he has written some new songs. One of them is a Christmas song that he is due to perform in December. Not bad for a man who turned 99 years old in September.

SONS OF THE PIONEERS

Hosting the only Western music-centered show in Branson, Missouri, the Sons of the Pioneers will enter the band’s 80th year of performing, yet without lead guitar player and vocalist Gary LeMaster, who passed away last year after 26 years with the group. Always a quality act, the Sons of the Pioneers continue to carry on the traditions established by Roy Rogers, Tim Spencer and Bob Nolan.

This full stage show with multimedia is performed by the Red Hot Rhythm Rustlers. The band’s latest album, Breakin’ Out, rose to #1 on The Western Way Magazine’s Cowboy/Western Music chart and remained in the Top 10 for nine months. The show features original songs written about America’s favorite movie cowboys of the 1930s, 1940s and 1950s. It also features the amazing guitar artistry of Tom Boyer and beautiful harmonies by Audrey McLaughlin, Dawn Pett and Gale Rogers.

After enjoying two years on the busy main strip of Branson, Missouri, R.J. Vandygriff has taken his performance as Joe Texas on the road. The show features some of the most popular cowboy tunes ever written and stories about the real cowboy life. Cowboy poetry mixed in with the songs adds to the variety of the show. A genuine drover setting around a campfire sets the mood for a performance loved by all who see it. The Cowboy Ain’t Dead Yet: Vol. 3 is the capstone for Vandygriff’s trilogy of albums built around the show.