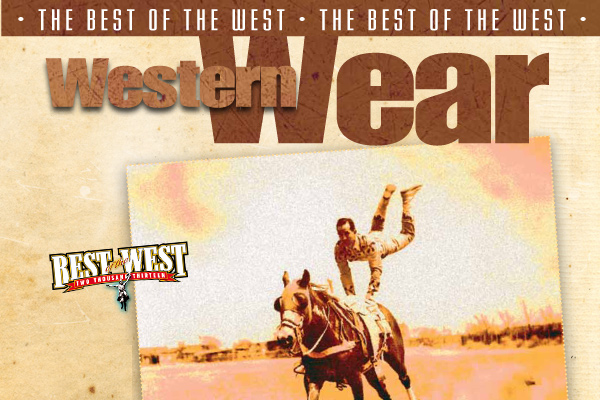 After Buck Brannaman got his deserving tribute in the award-winning Buck feature documentary last year, we all thought that Paul Bond should be next on the list.

At the time, the 96-year-old was still in the business of making satisfying boots for ranchers and cowboys. His time performing as a rodeo trick rider had actually helped him make his star turn; to impress the audiences, he crafted flashy boots with colorful shafts. He built up his boot business around his rodeo contacts and eventually found himself outfitting boots for celebrities such as Gene Autry, John Wayne, Johnny Cash and Clint Eastwood.

Bond put Nogales on the map when he opened his boot shop in that Arizona border town in 1955. He chatted up customers at his shop right up to the end of his life this past February.

Real cowboys will tell you Paul Bond’s style has always been in fashion. We agree. The Western wear arena will not be the same without this rodeo cowboy.

We shared with you how Texas Ranger Samuel Walker’s handgun design for the Walker Colt started us on the path to the Ranger belt, a classic piece of Americana.

We even tracked down an authentic, handmade buffalo coat you could purchase today when we discussed the evolution of the buffalo hide into the distinctive fur coats worn by soldiers and cavalrymen on the frontier.

Our Old West culture has been defined by these and other historic clothing styles, and it lives on in the evolving styles that we see on the big screen and on the folks who live and breathe the great American Western lifestyle today.

Whether it’s an Old West period outfit or contemporary garb inspired by history that makes you feel comfortable or stand out in the crowd, you can thank today’s makers of both modern and period dress for keeping our Western heritage alive.

We are thankful for those designers and manufacturers who strive to keep us in this genre well dressed and well heeled, and we commend many of our readers who present themselves in fine Western apparel and accoutrements. We’re often inspired by their outfits or by their questions put to us about the history of a particular style.

Every year, we travel far and wide to exercise our passion and pursuit for True West history. You can bet, when we do, we’ll be dressed to the nines. —Ken Amorosano