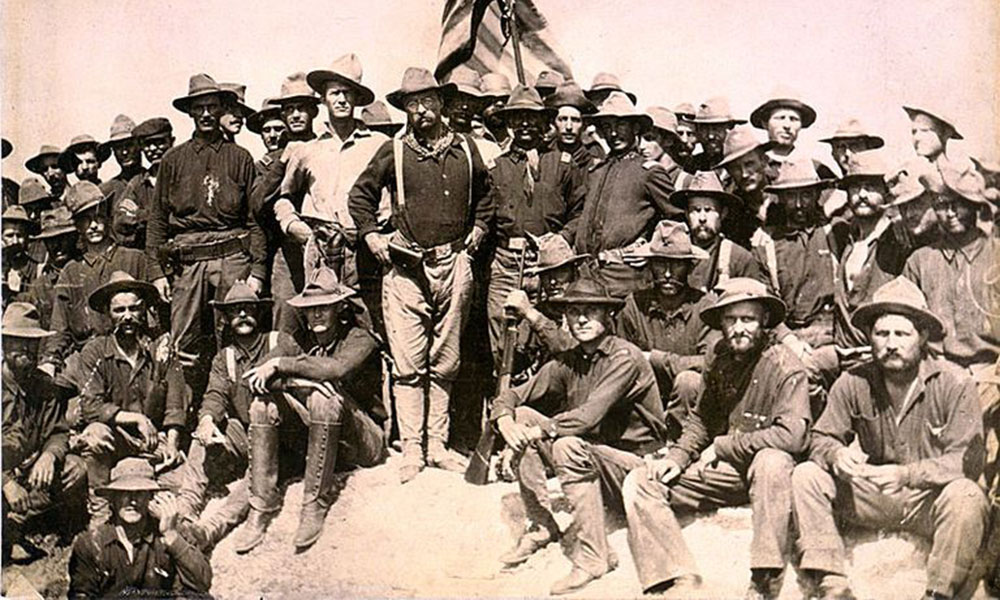 During time of war, special volunteer groups have always captured the fancy of the American public, often to the chagrin of regular military units, who saw them as undisciplined.  They also became the idols of the press. No group of volunteers has ever matched Teddy Roosevelt’s hell-bent-for-leather horse cavalry, known as the Rough Riders.

It was the end of an era for the American people.  The Civil War was history and the West was finally “won.”  If there were any new frontiers to win, or causes to fight for they would have to be on some foreign shore.

That foreign shore would be Cuba where the people were trying to shake off the yoke of hundreds of years of Spanish oppression.  The battleship, “Maine” blew up in the Havana harbor on the night of February 15th, 1898, taking the lives of some 250 Americans. Despite the fact there was no evidence the Spanish had anything to do with the explosion, Congress declared war.  For the first time in history, American soldiers would be fighting over another nation’s internal problems.

Arizona’s Territorial Governor, Myron McCord, was called upon to raise a regiment of volunteers under the command of Colonel Leonard Wood and Assistant Secretary of the Navy, the irrepressible Teddy Roosevelt.

Enthusiasm for the adventure brought hundreds of applicants and in just ten days Arizona’s two-hundred man quota was filled, leaving some 800 disappointed men behind.

The young men from northern Arizona were designated Company A and would be under the command of former Yavapai County Sheriff, Captain Buckey O’Neill of Prescott.  Company B, comprised of men from Southern Arizona would be under the command of Captain James McClintock. The regiment’s official name was the First United States Volunteer Cavalry but when Governor McCord referred to them as “Arizona Roughriders,” the media loved it and the name stuck.

The men didn’t care for the nickname at first, thinking it was a slur on their ability to ride horses but they soon wore the name as a badge of pride.  Their rallying song was “There’ll Be A Hot Time in the Old Town Tonight.” The song was so popular that during the war, Spanish soldiers thought it was America’s National Anthem.

Second in command of the regiment was Teddy Roosevelt was He’d come West as a young man and developed a love for the cowboy spirit.  His enthusiasm and zest for life was infectious. He and the rough and tumble Arizonans were a perfect match. The ex-sheriff of Yavapai County, William “Buckey” O’Neill, however, was the leader they emulated.  They all developed the swag of the dashing, colorful Irishman who earned his nickname from his propensity to “buck the tiger” of bet against the house at the faro tables of Prescott’s “Whiskey Row.”

Their baptism of fire came at Las Guisamas on June 24th.  In that battle, Captain McClintock and Major Alex Brodie were both seriously wounded. When Colonel Wood was promoted to brigadier general and given command of the Second Brigade, which included the Rough Riders, Roosevelt was promoted to colonel and became commander of the regiment.

Providing fire support were Lt. John Parker’s three Gatling guns. The Gatling guns expended some 18,000 rounds in eight and a half minutes.  That figures out to over 700 rounds per minute.

“We were exposed to the Spanish fire but there was very little because just before we started, why, the Gatling guns opened up at the bottom of the hill, and everybody yelled, ‘The Gatlings! The Gatlings!’ and away we went. The Gatlings just enfiladed the top of those trenches. We’d never been able to take Kettle Hill if it hadn’t been for Parker’s Gatling guns.”

Before the assault began that morning, Spanish snipers had been taking a heavy toll on the Rough Riders and the other two cavalry regiments.  Among the casualties was Captain O’Neill. He was standing defiantly out in front of the Company A trenches as if daring them to shoot when a sniper’s bullet cut him down.

The men then rallied around Roosevelt, who seemed to be everywhere as he rode up and down the line on his horse, “Little Texas,” shouting encouragement and calling upon the men to follow him up the hill.  He tied a blue bandana around his hat, the tail streaming behind him. He didn’t mind that he was making himself a target to snipers. He turned and charged up the hill. He’d gone but a short distance when he looked back to see only five men following him. TR rode back and called for more.  Soon hundreds, included the storied Buffalo Soldiers of the 10th Cavalry, were following Roosevelt up the hill.

When a cowboy from Safford, Fred Bugbee, suffered a head Roosevelt shouted, “You, go back to the rear,”

“You go to hell,” the cowboy replied.

Roosevelt just grinned. That was the kind of “bully spirit” he loved.

Up the hill they charged, overrunning the Spanish positions and when the smoke had cleared, what became known as the Battle of San Juan Hill was over.  Teddy Roosevelt and his Rough Riders had charged into history, legend and lore. That charge would eventually take him all the way to the White House.