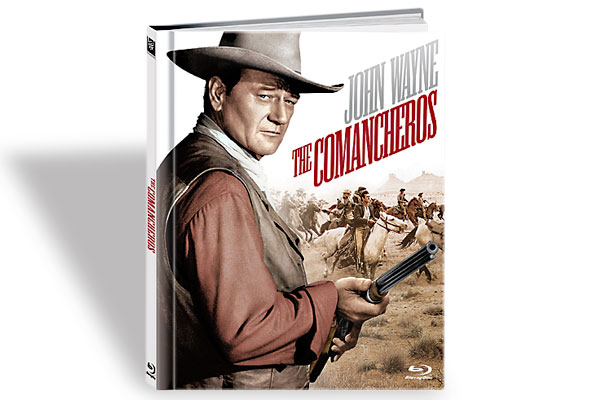 As a terrific documentary on this 50th anniversary Blu-ray edition of 1961’s The Comancheros tells us, John Wayne came out of the 1950s looking to make pictures that were less exhausting than The Alamo, the three-hour historical saga he’d just directed and starred in.

Yet The Comancheros was filmmaker Michael Curtiz’s last picture; his illness during production forced Wayne to handle much of the directing.

The sprawling epic is about a Texas Ranger (Wayne) and his dandified prisoner (Stuart Whitman) on the trail of a passel of bad guys who are selling guns to the Comanche Indians. Lee Marvin appears briefly as a half-scalped homicidal lunatic, and he nearly steals the movie—Wayne and Marvin were immediately reteamed in The Man Who Shot Liberty Valance.

Despite the picture having the biggest budget of any 20th Century Fox movie that year, the script doesn’t hold together and the movie is lousy with historical goofs. Too bad, because somewhere in the middle of all that is the germ of a great Western picture.

The Comancheros does have some of the most beautifully photographed scenery in Western movie history.  Monument Valley and Moab, Utah, are locations that show up in manyWayne pictures, but on this Blu-ray DVD, they’ve never looked better.

The 50th anniversary “Digibook”  includes a cast commentary and two fine documentaries, one on the Duke and the work he did for 20th Century Fox, and the other on the Comanches.

What’s more, they’ve reproduced the Dell comic that came out when the film was released. Since the publisher was working off a script in advance of the finished film, the comic has a scene that didn’t make the final cut, and it’s a very different ending.  This is the way all good movies should be treated in the digital age.