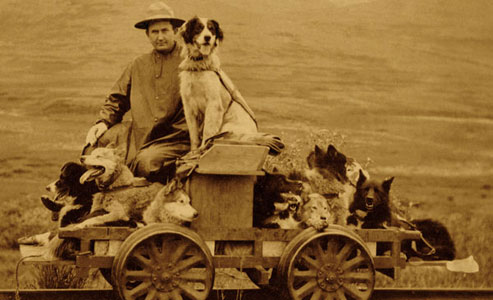 During its July 1872 term, the Missouri Supreme Court announced what appeared to be an innocuous opinion concerning $100.

The opinion started: “Suit was brought originally before a justice of the peace for killing plaintiff’s dog, and the damages were laid at $100.” It ended 10 sentences later, with a decision for the dog’s owner.

That was nearly 140 years ago, and we still talk about the case that prompted that opinion. You might recognize it as “Senator Vest’s Tribute to the Dog.”

The dog was named Old Drum. He was a black hound dog, and he had been Charles Burden’s companion for a number of years. They lived in Warrensburg, Missouri. Burden’s brother-in-law, Leonidas Hornsby, lived next door, and they were both farmers.

Hornsby was having a hard time. Dogs and wolves were killing his sheep, and he couldn’t stop them. He vowed that he would shoot the next stray dog that appeared on his property. On October 28, 1869, Old Drum wandered onto his property. Hornsby later said that he and his nephew thought the dog might belong to a neighbor, so they decided to load their gun with corn and shoot the dog with that, which would scare it, rather than kill it. The nephew did the shooting. When the dog was hit, it jumped over a fence and limped away.

Burden heard the shot and remembered Hornsby’s threat to kill any dog that wandered onto his property. He called his dogs home, and all reported in except his favorite, Old Drum. A dog’s howling could be heard throughout the night and during his search for Old Drum the next morning. Yet Burden suspected the howling dog belonged to a neighbor named Davenport. He went to Hornsby’s house and asked him if he had shot at a dog. Hornsby replied his nephew had shot a dog, but it was not Old Drum.

When Burden found Old Drum’s body beside a creek, it looked as though someone had placed it there. A number of shots had entered his body, which was covered with sorrel horse hairs. Hornsby owned a sorrel horse.

Burden filed a lawsuit against Hornsby for $100 before the Justice of the Peace in Madison Township. Hornsby’s lawyers then filed a motion to dismiss it because $100 was beyond the court’s jurisdiction. The judge allowed Burden to amend his complaint to ask for $50, which was within the court’s jurisdiction. The case went to trial, and the jury couldn’t reach a verdict. At the second trial, the jury awarded Burden $50. Hornsby then appealed and won a new trial. At the third trial, the jury gave its verdict to Hornsby.

Burden then discovered that Hornsby had removed bullets from the body of Old Drum, and he asked for a new trial based on that new evidence. His motion was granted, and a fourth trial was set. Burden was represented by the law firms of Phillips & Vest and Elliott & Blodgett. George G. Vest was well known in the area; later, in 1879, he was elected to the U.S. Senate from Missouri. The fourth trial began in 1870, and it took place in the Old Johnson County Courthouse in Warrensburg, before Judge Foster Wright.

When Mr. Vest made his closing argument to the jury, he didn’t mention the evidence or Old Drum. He used only a handful of sentences. It took only a few minutes, but that is what we have remembered for more than a century.

He said: “The best friend a man has in the world may turn against him and become his enemy. His son or daughter whom he has reared with loving care may prove ungrateful. Those who are nearest and dearest to us, those whom we trust with our happiness and our good name, may become traitors to their faith. The money that a man has he may lose. It flies away from him perhaps when he needs it most. A man’s reputation may be sacrificed in a moment of ill-considered action. The people who are prone to fall on their knees to do us honor when success is with us may be the first to throw the stone of malice when failure settles its clouds upon our heads. The one absolutely unselfish friend that a man can have in this selfish world, the one that never deserts him, the one that never proves ungrateful or treacherous, is the dog.

“…a man’s dog stands by him in prosperity and in poverty, in health and in sickness. He will sleep on the cold ground where the wintry wind blows and the snow drives fiercely, if only he may be near his master’s side. He will kiss the hand that has no food to offer. He will lick the wounds and sores that come in encounter with the roughness of the world. He guards the sleep of his pauper master as if he were a prince.

“When all other friends desert, he remains. When riches take wings and reputation falls to pieces, he is as constant in his love as the sun in its journey through the heavens. If fortune drives the master forth an outcast in the world, friendless and homeless, the faithful dog asks no higher privilege than that of accompanying him, to guard him against danger, to fight against his enemies. And when the last scene of all comes, and death takes his master in its embrace and his body is laid in the cold ground, no matter if all other friends pursue their way, there by his graveside will the noble dog be found, his head between his paws and his eyes sad but open, in alert watchfulness, faithful and true, even unto death.”

Some say that before awarding Burden $50, the jury asked if it could award more money than he had asked for, but that cannot be proven.

Be sure to give a pat on the head to your favorite dog pal on August 26, National Dog Day.