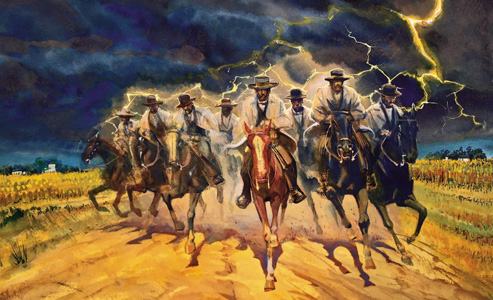 On September 7, 1876, the First National Bank of Northfield, Minnesota, was robbed.

Historians agree on that much. But ask them anything else—Who was in the bank? How many robbers?

Why Northfield?—and you’ll likely be as confused, frightened and/or angry as residents and outlaws were on Division Street 136 years ago.

Well, historians also agree on this: Northfield was one bad career move for the James-Younger Gang.

I think the gang was a victim of its own success,” says Pulitzer Prize winner T.J. Stiles, author of Jesse James: Last Rebel of the Civil War.

“Their plan had worked before, but only when they had surprise on their side, and when there seems not to have been so many people on the street…. By driving citizens off the street, they simply drove them to cover in brick buildings, able to shoot back at very short range. The gang members themselves were exposed on the street. It was a disastrous tactical situation.”

Missourians Frank and Jesse James and Cole, Jim and Bob Younger were products of the bloody Kansas-Missouri conflict during the Civil War. When the war ended, they did not return to peaceful farming. On February 13, 1866, a gang of 10 to 13 “bushwhacking desperadoes” robbed the Clay County Savings Association in Liberty, Missouri, the first daylight bank robbery in peacetime America. Eventually, the James-Younger Gang would be linked to that crime (although that’s also debated) and a string of robberies—banks, stagecoaches, trains, even the Kansas City fair’s box office—that followed in Arkansas, Iowa, Kansas, Kentucky, Missouri, West Virginia….

Gang members came and went, but in 1876, the Jameses, Youngers, Bill Chadwell (and possibly Bill Stiles), Charlie Pitts and Clell Miller found themselves in Minnesota.

“They needed to avoid Missouri for a time after a gang member was arrested and made a full confession following the successful Rocky Cut robbery [July 7, 1876],” says Mark Lee Gardner, whose book, Shot All to Hell: Jesse James, the Northfield Raid, and the Wild West’s Greatest Escape, is due out next year from William Morrow. “Minnesota was the last place the authorities would expect to find them—the gang had a knack for picking such places.”

Stiles provides this reason: To punish Adelbert Ames, a former Union general and Reconstruction governor of Mississippi hated by many Southerners, and Ames’s father-in-law, radical Republican Congressman Benjamin Butler. Both had money in the Northfield bank.

“In the classic book Jesse James Was His Name, William A. Settle Jr. dismissed this claim as a ‘rationalization’ made to curry favor with the Southern public,” Stiles says. “But I found that Younger made the same claim years earlier, in an account of the robbery written for his Minnesota prison warden—who would hardly sympathize with this reason. Then I walked it back further still, and found a newspaper report from the day the Youngers were captured, in which Bob Younger explained that they had targeted the bank because Gov. Ames had money in it, and one of the gang had a spite against him. He said this to Yankees, so if it was a made-up reason, it was a lousy one.”

Counters Gardner: “Bob Younger told a reporter that the ‘raid in Minnesota was not intentional. They came for pleasure, but learned ex-Gov. Ames … had money in the Northfield bank; one of the boys had a spite against him, and so the robbery was planned, and to pay expenses.’ Bob would also state that because Northfield only had one bank, they believed that more funds were concentrated there…. As Bob makes clear in the quote above, the gang did not learn about Ames until after they arrived in Minnesota.”

The Missouri bandits either came by horse or train (also debated), and landed in St. Paul.

John J. Koblas, author of Faithful unto Death: The James-Younger Raid on the First National Bank, September 7, 1876, Northfield Minnesota, thinks the boys picked St. Paul because the city is where Jack Chinn, a former Confederate from Kentucky, owned Chinn and Morgan’s gambling house.

“That guy is really friendly to the James guys, and the James gang members weren’t the type of guys who made friends right away,” says Koblas, who’s working on a book, Jack Chinn and the Northfield Robbery. “You didn’t want them hanging around your house.”

“They went right to Chinn,” Koblas says. “You know, they were getting the lay of the land…. People got suspicious because of the horses they rode. They wouldn’t want to rob a bank on Minnesota plow horses.”

After leaving St. Paul, the boys split up, traveling across southern Minnesota. They may—or may not—have considered robbing a bank in Mankato (Stiles dismisses it; Gardner and Koblas don’t). In any event, on September 7, eight men rode into Northfield.

Or were there nine?

Koblas accepts that theory. His book, The Jesse James Northfield Raid: Confessions of the Ninth Man, recounts one Bill Stiles’s 1931 confession that he took part in the Northfield raid along with Bill Chadwell, who was killed. “People are calling me the 10th man,” Koblas says. “I’m not necessarily convinced that Chadwell-Stiles thing was true, but I think there was something to it.”

Stiles and Gardner don’t buy it. But all three accept this: Around 2 p.m. on September 7, three men rode into town, tethered their horses to hitching posts and sat on dry goods boxes in front of Lee & Hitchcock’s store. The town was packed when Cole Younger and Clell Miller rode up and watched their three companions enter the bank.

“They are going in,” Miller said.

Replied Younger: “If they do, the alarm will be given as sure as there is a hell….”

After dismounting, Miller walked to the bank’s entrance and closed the front door. Younger pretended to tighten his saddle cinch.

Suspicious, Northfield resident J.S. Allen walked to the bank door and tried to look in. Miller jerked him away, drew his pistol and began cursing at the man. Allen ran to a nearby store, sounding the alarm.

Younger and Miller mounted their horses. Other outlaws galloped to the scene, shooting, shouting, trying to scare off the residents. Instead, some residents got their guns.

That doesn’t surprise Stiles, who grew up in Minnesota and attended Northfield’s Carleton College. “Ten years of successful bank robberies, many on precisely the same model as used in Northfield, had taught the public that these things happened, and gave them an idea of what it looked like. When the first cries of ‘Robbers in the bank!’ went up, the people of Northfield got it immediately.”

Elias Stacy sent a charge of birdshot into Miller’s face, knocking him off his horse. Medical student Henry Wheeler grabbed a rifle and ran to a second-floor window at the Dampier Hotel. His shot killed Miller. As Cole Younger ran to check on his friend, Anselm Manning put a bullet in the outlaw’s hip. A short while later, Manning killed Chadwell. Cole Younger yelled at the bank door, “For God’s sake, boys, hurry up! It is getting too hot for us!”

Inside, things weren’t going well either.

Joseph Heywood, Frank Wilcox and Alonzo Bunker didn’t cooperate when the outlaws demanded the safe be opened. “There’s a time lock on,” Heywood lied, “and it can’t be opened now.”

Heywood was brained with a pistol, and as the outlaws tried to coerce Heywood, Bunker ran for the back door. Pitts shot him, but Bunker escaped and lived.

Finally, Cole Younger kicked in the bank door. “The game is up,” he yelled. “Better get out, boys.”

The last outlaw to leave the bank put a bullet in Heywood’s brain. Out of the more than $15,000 in the bank, the outlaws made off with $26.70. The robbery had lasted roughly seven minutes.

But who murdered Heywood?

Jesse, Stiles says. “Eyewitness testimony from other robberies—itself subject to question, I grant you—puts Jesse James at the seat of the action, holding up the cashier or express messenger…. Jesse was clearly more volatile, and he became more so as the years went on.”

Frank, says Gardner, who, like many historians today, puts Jesse outside during the robbery. “Upon Frank James’s surrender to Gov. Crittenden in 1882, Wilcox made a special trip to Missouri to get a good look at the notorious outlaw. Wilcox visited James in the jail in Independence, and just as soon as Wilcox returned to Minnesota, he signed a detailed affidavit identifying Frank James as the killer of Joseph Heywood.”

Does it matter? “I don’t think so,” Stiles says. “Jesse James had killed unarmed men in cold blood many times before. If he didn’t shoot Heywood, he probably wished he had.”

The surviving outlaws—six men on five horses—galloped out of town, leaving behind two dead robbers and one dead banker (Heywood) and one dying citizen (unarmed Swedish immigrant Nicolaus Gustavson, shot in the head on the street).

They crossed the Cannon River at Dundas, three miles south, then moved west (Koblas documents the who-knows-what’s-true route in Jesse James Ate Here: An Outlaw Tour and History of Minnesota at the Time of the Northfield Raid). Meanwhile, Minnesotans gave chase.

That, Gardner says, “was not only the largest manhunt in U.S. history up to that time, but also the largest gathering of inept manhunters up to that time. The posses blew at least three excellent opportunities to nab the fugitives in Minnesota, including Lake Crystal, where nine of 10 guards stationed at a key bridge decided to take a nap.”

At some point, the James brothers left the badly wounded Youngers and Charlie Pitts. Frank and Jesse escaped, which, Gardner says, “was nothing short of superhuman and definitely cements their reputation as among the most notorious and legendary outlaws to ever live.”

How did Jesse and Frank manage to get away?

“The Youngers, in getting caught, attracted a lot of the attention of pursuers,” Stiles says. “And the James brothers were initially unwounded, unlike the Youngers, which was the second critical fact; they could ride, and ride hard.”

At Hanska Slough on September 21, a posse from Madelia surrounded the Youngers and Pitts. Sheriff James Glispin asked for volunteers, and he and six men—the original “Magnificent Seven”—entered the thicket. Pitts suggested to Cole Younger that they surrender, but Younger said, “Charlie, this is where Cole Younger dies.”

Said Pitts: “All right, Captain, I can die just as game as you can. Let’s get it done.”

Indeed, Pitts died game, killed in the barrage, and the Youngers again were riddled with bullets, but somehow survived. They would patch themselves up, plead guilty (to avoid a hangman’s noose) and be sent to Stillwater prison.

Bob Younger died in prison of tuberculosis in 1889 at age 35. Cole and Jim were paroled in 1901. In 1902, Jim killed himself. The next year, granted a conditional pardon, Cole returned home to Missouri. He died in 1916, just a year after Frank James’s death. Cole never implicated the James boys in the Northfield crime.

Did Frank and Jesse learn anything from Northfield?

“I have to think it shook them up deeply,” Stiles says. “But they reacted in different ways. Frank seems to have decided to straighten himself out; clearly he worked hard, and honestly, for the next few years. But I think Jesse was adrift. He couldn’t hold down a farm or a job; he wanted easy money and excitement, gambling and fast horses. Eventually he came back to the one thing he knew how to do well, and liked.”

Gardner: “Actually, Frank and Jesse hoped bank cashiers learned an important lesson about opening the safe at the point of a gun. As for Jesse, I don’t think he learned anything initially.  Later, he learned that good men are hard to replace.”

That lesson likely came too late. On April 3, 1882, gang member Robert Ford shot and killed Jesse in his home in St. Joseph, Missouri.

Johnny D. Boggs, author of the novel Northfield and the nonfiction book Jesse James and the Movies, says he was nowhere near Northfield in 1876.