The Mona Lisa of the Range 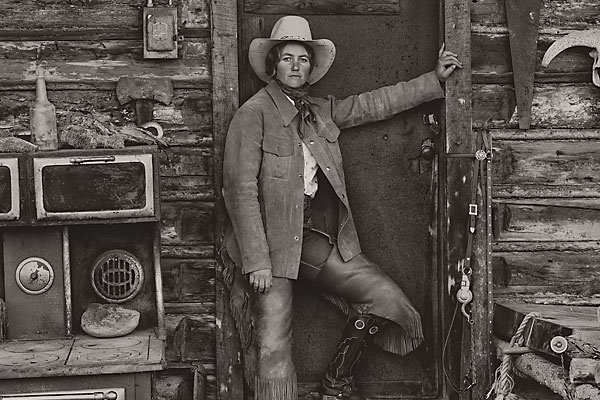 I was teaching photography at Prescott College in Arizona when I met 19-year-old Julie, the daughter of renowned wildlife artist Grant Hagen. She was my student and advisee, and a cowpunchin’ pardner to my wife Kathie and me, when we were horseback help for rancher friends in the area. We three remain close friends to this day.

I lucked into a 1981 Guggenheim Fellowship to photograph working cowboys from Canada to Mexico. On my way back south from British Columbia and Alberta, I stopped in at the Wyoming ranch where Julie looked after several hundred mother cows and their calves on a Forest Service allotment in the Gros Ventre Range. Julie had just turned 30 a day or so before I photographed her in the doorway of her rustic residence. She was her usual smiling self on that occasion, so I had to admonish her to get serious for once, because I was down to my last sheet
of 8×10 film.

Julie, more recently an artist working in pencil and bronze, lives on Porcupine Creek, south of Jackson. She is my heartthrob—has been for many years. She’s also the heartthrob of lots of other Western males. No wonder she’s often called the “Mona Lisa of the Range.” She’s kinda the Honkytonk Sue of grazing allotments—rather than honky-tonks.

Visit tinysatellitepress.com for his online portfolio.