B. B. Bullwinkle And The Arizona Cattle Company In spite of his inexperience, Bullwinkle learned the cow business quickly. His commanding presence more than made up for his lack of knowledge.... 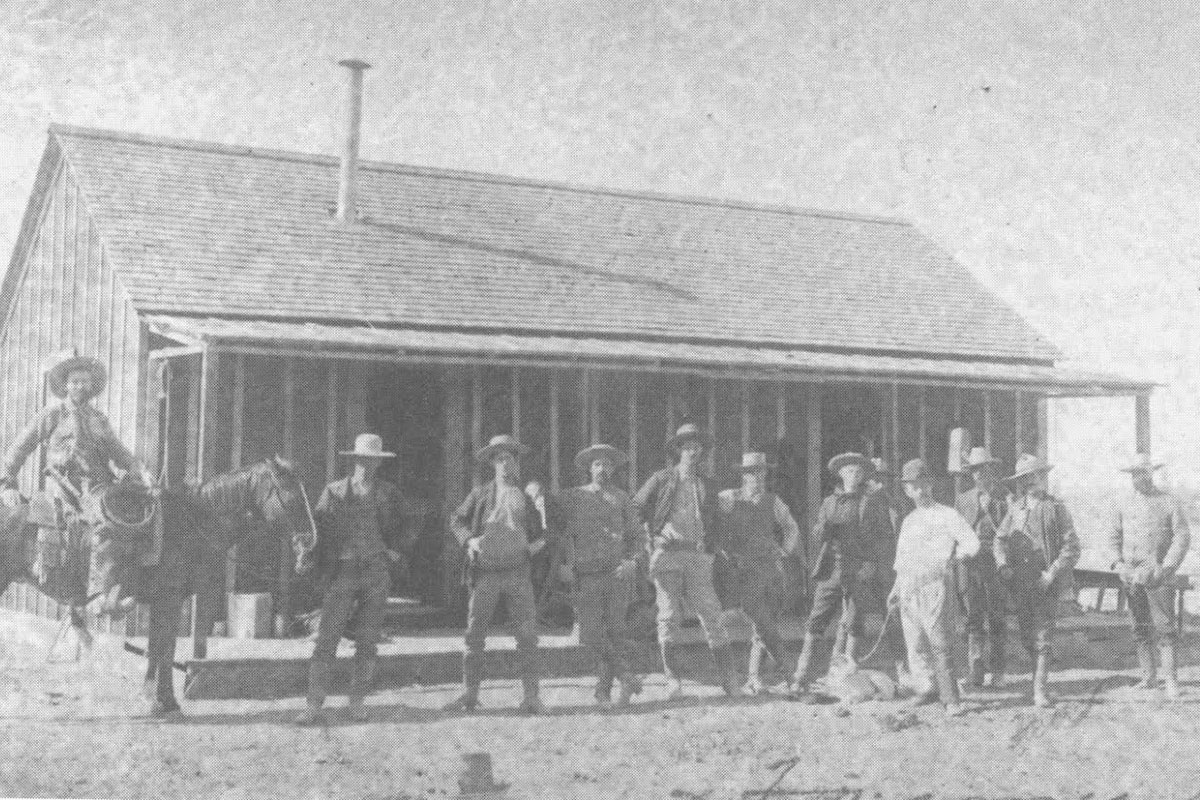 John Young, a son of Mormon leader Brigham Young was one of the earliest settlers.  He was contracted to deliver 50,000 railroad ties for the new line. He built a camp for his tie cutters in what is today Fort Valley, a short distance north of today’s Flagstaff.  The threat of Indian raids caused Young to turn the camp into a fortress, which he called Moroni, after the Mormon Angel. A log cabin 75 feet long acted as one side of the bastion.  The other three sides of the square consisted of railroad ties set in the ground on end.

The arrival of the iron-bellied locomotives in 1881 heralded the real beginning of the cattle business in northern Arizona.  Young and several companions organized the Mormon Cattle Company, stocking the virgin ranges around Flagstaff for the first time on a large scale.

By 1883, the price of cattle was $50 a head, up from $15 a head just two years earlier.  That same year Young teamed up with a group of Eastern capitalists, led by Colonel Jake Ruppert Sr., father of the man who would own the New York Yankees during the heyday of Babe Ruth.  They founded the Arizona Cattle Company, headquartering at Fort Moroni.

After Young left, the outfit build several new buildings at Fort Moroni and re-named it Fort Rickerson, in honor of C. L. Rickerson, an officer in the New York based company.  During its heyday, the Arizona Cattle Company, or A1, ran some 16,000 head on some of the finest cattle country in the West. They ranged from south of Flagstaff near Lake Mary, north to the Grand Canyon, and from Ash Fork on the west, to the Little Colorado on the east on 132,000 acres of land purchased from the railroad at fifty cents an acre.

In 1885 the absentee owners selected a field manager, a colorful, blustering ex-Chicago fire captain named B. B. Bullwinkle, who literally talked his way into heading up one of northern Arizona’s largest cow outfits.  In spite of his inexperience, Bullwinkle learned the cow business quickly. His commanding presence more than made up for his lack of knowledge, and the ranch flourished with the captain at the helm.

He erected fences, built barns and bridges on the ranch.  He even strung a telegraph line from Fort Rickerson to Flagstaff.  His range boss was a hard-riding cowboy named Jack Diamond, who held the job until the company folded in 1899.

Bullwinkle was a western gentleman who liked pretty women, fast horses, and poker.  The epic poker games the flamboyant captain engaged in with other cattlemen were a reflection of the prosperous times in the business. In one game, with just the turn of a card, the captain held three aces, became the new owner of 762 cows and a big stock ranch.

The Arizona Cattle Company prospered a few more years before a prolonged drought and overstocked ranges drove the company out of business in 1899.  That year range boss Jack Diamond shipped a record 10,000 head to market. But the good times were done. That same year the Hash Knife outfit went bust closing the book on a colorful chapter in Arizona history.