Lazy B Ranch The 250 square-mile Lazy B was one of Arizona’s largest cattle ranches... 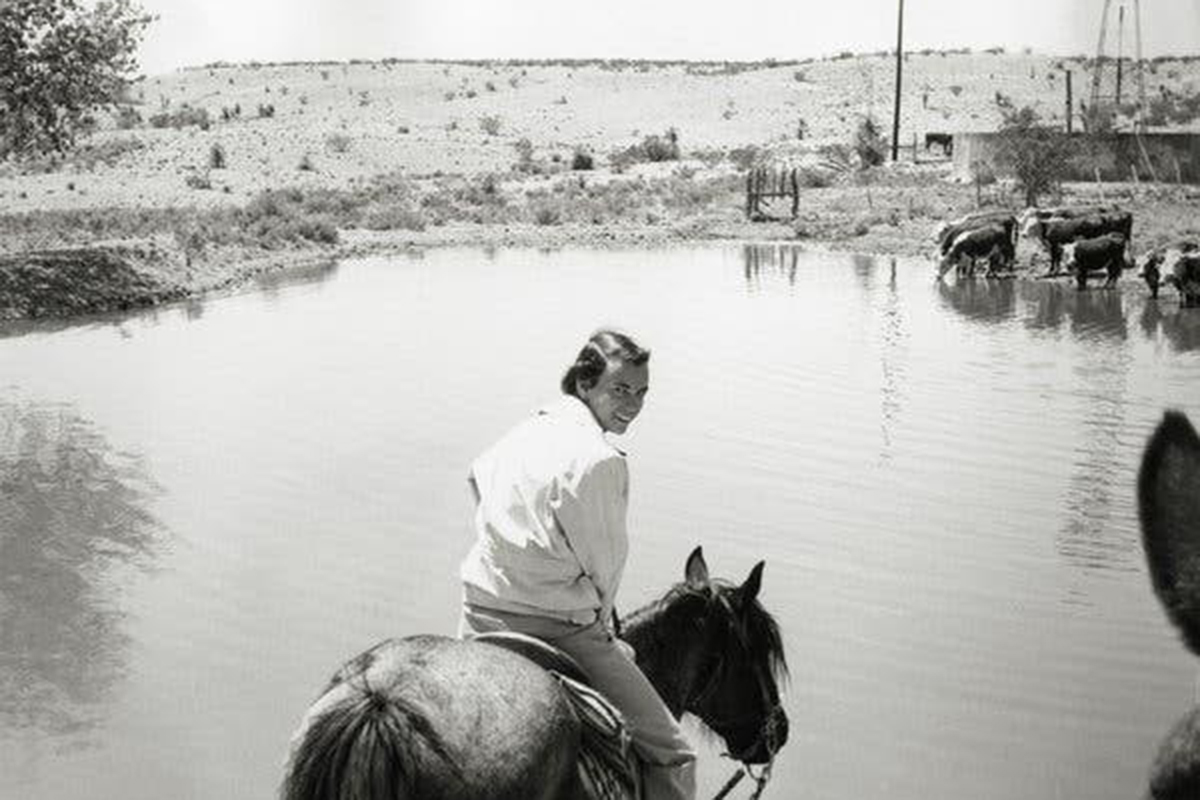 The post-Civil War years were boom times for cattle ranching in the West. Henry Clay “HC” Day, a New Englander from Vermont, decided to seek his fortune in the cattle business.  He arrived in Wichita, Kansas in 1879 and bought a cow ranch.

At the age of 35 he married a local woman, Alice Hilton and a year later the newlyweds decided to take advantages of the public lands in the Southwest and headed for New Mexico.  He bought a herd of cattle in Mexico and brought them to his ranch in Arizona, near the New Mexico border.  Next, he branded them on the left hip with a B lying down. A brand lying on its flat side was called “lazy” so the ranch became known as the Lazy B.

HC hired a man named Lane Fisher to run the outfit and business prospered.  The Southwest rangelands weren’t dogged by the blizzards and severe cold that ravaged entire herds in Montana, Wyoming and the Dakotas.  Here, cattle could forage year-round.  An occasional summer drought or raiding Apache bands were the only serious hazards and most of the raids ended with the surrender of Geronimo and his band in 1886.

The most serious problem confronting ranchers was lack of water.  Deep wells had to be sunk and windmills built to pump out the wet stuff.

HC and Alice took their young son, Courtland, on an extended vacation to Europe but upon returning to Kansas, learned their superintendent, Lane Fisher had been putting his own brand on Day cattle.

Day went immediately to Lordsburg, New Mexico to talk to a lawyer, who advised him to get a gun.  Day opted instead to confront Fisher and relieve him of his duties.  As a result, HC would have to run the Lazy B.  He built a small house near the Gila River at the north end of the ranch then built a one-room school and hired a teacher to accommodate his growing family.  He then moved his family to the Lazy B where his fifth and last child, Harry, was born in 1898.

After spending the next dozen years at the Lazy B, HC decided to move his family to Pasadena, California.  During the summers he took young Harry and returned to the Lazy B where they continued making improvements on the ranch.  It was during these memorable years that Harry Day learned the cattle business from the ground up.

He entered the service during World War I and after returning home, HC sent him to check out the Lazy B and see why the outfit wasn’t making a profit.

Originally, Harry didn’t intend to become a cowman.  After sleeping on the cold ground and eating salt pork he’d made up his mind to try his luck in some other line of business.  But when HC died in 1921, his plans suddenly changed.  The ranch was now his to run.  He got to work and built a new house and headquarters in the center of the ranch, ten miles south of the Gila River.

In 1927, he made a trip to El Paso to buy some bulls from a local rancher named W. W. Wilkey.  That evening he was invited to dinner where he met the Wilkey’s pretty daughter, Ada Mae.  It was love at first sight for both and after a brief, three-month courtship, mostly by correspondence, they eloped to Las Cruces.  The couple then set up housekeeping at the four-room adobe house to begin their life together at the Lazy B.

Harry and Ada Mae spent the rest of their lives at the Lazy B where they raised their three children, Sandra, Ann, and Alan.

Harry Day died peacefully in his sleep in 1984 and Ada Mae passed away five years later.

Ann Day eventually served in the Arizona legislature while Alan ran the ranch for thirty years.  Their eldest, Sandra, graduated second in her Stanford Law School class.  In 1952, she married a classmate, John O’Connor, and returned to Arizona where she practiced law, eventually entering politics where she was elected Senate Majority Leader, the first woman from any state to hold that office.

She later served several years as a Superior Court Judge and Judge of the Court of Appeals.  In 1982, President Ronald Reagan appointed her the first woman Associate Justice on the United State Supreme Court.

The 250 square-mile Lazy B was one of Arizona’s largest cattle ranches.

One of my fondest memories occurred in 1980 when Sandra invited me to help celebrate the 100th Anniversary of the Lazy B. We’d met several years earlier at Scottsdale’s Parada del Sol. She was Arizona Senate Majority Leader at the time. We were in the staging area waiting for the parade to begin and I could tell in an instant by the way she handled her horse she was the real deal. She sat that horse like she was born in the saddle. Turns out she was. I rode over to her and said with a grin, “This ain’t your first rodeo.”

She smiled and replied, “I was born on a ranch.”

From that day on we were friends. She invited me to speak to some of the groups she belonged to when the ranch was celebrating its centennial I boarded a small plane and headed for the Lazy B.

The landing strip was a graded piece of ground near the ranch house. The Day family was all there, Harry, Ada Mae, Ann, Alan and Sandra along with hundreds of well-wishers.

When it came time for the program they rolled out a flatbed hay wagon carrying a large sound system. Sandra and I each took a microphone in hand and climbed on and for the next thirty minutes or so we told stories. It was a day I won’t forget.

I had no way of knowing at the time that two years later she would be appointed the first woman to sit on the United States Supreme Court.