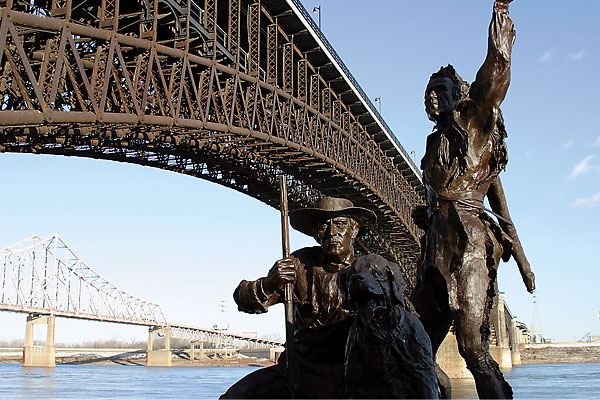 2. The heart of Forest Park is the Missouri History Museum. Check out the re-creation of William Clark’s office when he was Indian agent for the whole Louisiana Territory. In the gift shop, you can pick up authentic 1700s trade bead jewelry or a Lewis & Clark necktie.

3. A stroll across the park takes you to the Saint Louis Art Museum, with works by Frederic Remington and Georgia O’Keeffe. Enjoy Bierstadt’s landscapes, Bingham’s boatmen and Thomas Hart Benton’s lyrical pioneers.

4. Don’t miss the Campbell House Museum, built in 1851. It was the home of Robert Campbell, who went west with Jedediah Smith to trade for furs, participated in the first mountain man rendezvous and became a millionaire entrepreneur.

5. A few blocks east is Laclede’s Landing, where the city began as a trading post. The massive arches of Eads Bridge overlook Captains Return, a statue portraying Lewis & Clark’s homecoming. Among the 19th-century buildings is Morgan Street Brewery, where you can try the Brewski (a five-beer sampler). Or go to Sundeckers for toasted ravioli, a St. Louis tradition.

6. In the shadow of the iconic Gateway Arch, you’ll find the Jefferson National Expansion Memorial and the Museum of Westward Expansion, with its fabulous exhibits. Don’t miss the big-screen movie about Lewis and Clark.

7. The tour wouldn’t be complete without experiencing the Mississippi River itself on the paddle wheelers Tom Sawyer or Becky Thatcher. Get on board at Gateway Arch Riverboat Cruises.

8. Just downriver is the Anheuser-Busch Brewery, where its American lager was introduced in 1876. Take the tour, see the Clydesdales and watch beer still being made in the Old Brew House.

9. On the banks of the Mississippi you’ll find Jefferson Barracks, a U.S. Army post since 1826. The park’s historic buildings now house museums; the beautiful National Cemetery, fifth largest of its kind in the nation, is the resting place of eight Medal of Honor recipients.

10. Our last stop is Grant’s Farm, a lively family attraction, featuring bison, antelope and other animal exhibits. Grab a bratwurst at the German farmstead, and explore the log cabin built by a young Ulysses S. Grant in 1855.