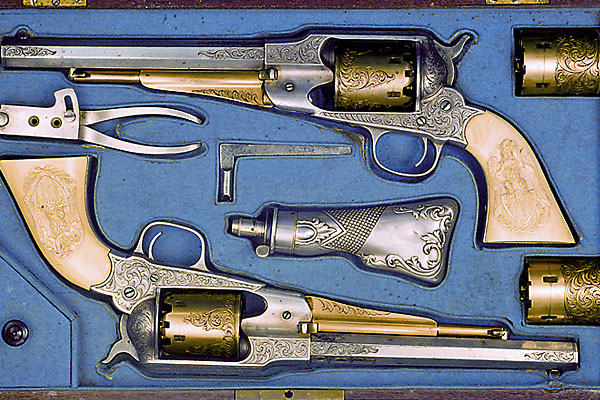 The debate over whether frontiersmen carried spare loaded cylinders for their revolvers, during the era of percussion revolvers and into the age of early metallic cartridge six-guns, continues to rage on.

On one side, the naysayers state that this is just one more bit of Wild West or Hollywood mythology, while proponents feel that, in those early years, when revolvers were slow to reload, if two six-shooters weren’t carried, some carried an extra fully-loaded and capped cylinder.

It is indeed a fact that the practice has been reflected in movies like Clint Eastwood’s 1985 flick, Pale Rider. True, recorded accounts of frontiersmen citing the use of a spare cylinder are almost nonexistent. Undeniably, the best-known example of this practice is that of Pony Express rider “Pony Bob” Haslam, who recorded that, just prior to riding across Nevada in 1860, he “adjusted…my Colt’s revolver, with two cylinders ready for use in case of emergency.”

In an age when many people couldn’t read or write, if one example can be found, then certainly several others must have gone unrecorded. During the Civil War, the Missouri raiders and Mosby’s Virginia partisans each carried several revolvers. It stands to reason that if a revolver was rendered inoperable, rather than completely discard it, you might salvage the otherwise useless cylinder and carry it loaded and ready for use.

For irrefutable documentation of the practice, one can refer to a number of studies by respected firearms historians, R.L. Wilson, Roy Marcot and R. Bruce McDowell, who not only write about it, but also show numerous photos of revolvers produced with spare cylinders. The manufacture of revolvers with extra cylinders was not uncommon, with some revolver makers, like Remington, advertising the sale of extra cylinders.

Even in Europe, during the mid-19th century, England’s John Rigby & Sons produced pepperbox revolvers with spare quick-change barrels for fast reloads. Also, the Prussian Kreigsmarines were issued 1851 Navy Colts with a spare cylinder, as well as a belt and holster rig containing a circular pouch for holding it.

In the face of all of this evidence, the question must be asked, why would these major arms makers produce extra cylinders if the public was not buying and utilizing them? There’s no doubt they were used. I’ll put my spare cylinder on it!