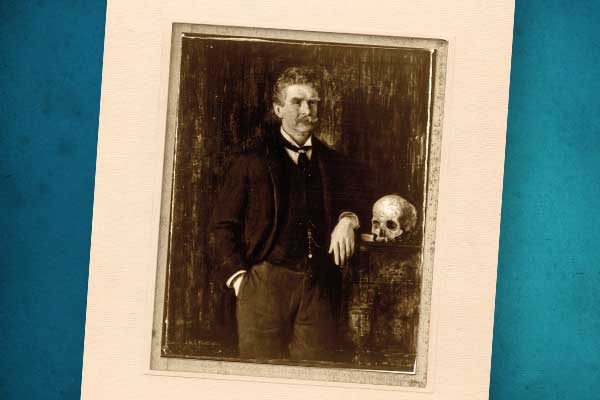 Ambrose Bierce’s was a life of remarkable contrasts. He was born in 1842 to the poverty of a Midwestern log cabin and a family of 13 children; he survived three enlistments amid the carnage of America’s Civil War battlefields; he lived and wrote in London, San Francisco and Washington D.C.; and finally, he disappeared into Mexico.

His life was dedicated to the published word. Compared in humor and acerbic wit to Mark Twain, and in dark horror with Edgar Allan Poe, Bierce’s prolific writings would reportedly fill 72 volumes of materials.

But as for many American generations, the road to manhood for Bierce began on a road to war. After a year of studies at the Kentucky Military Institute in 1859, he enlisted as a private in Company C of the Indiana Volunteers Ninth Regiment on April 19, 1861. The soldier, advancing from private to brevet major, fought until 1865, even surviving a shot to his head from a Confederate sniper. The writer produced some of his most poignant work inspired by the sacrifices he saw during the war, including his 1881 essay “What I Saw of Shiloh,” in which he wrote, “This is a simple story of a battle; such a tale as may be told by a soldier who is no writer to a reader who is no soldier.”

Bierce’s most anthologized short story, “An Occurrence at Owl Creek Bridge,” tells of a Confederate spy condemned to hang from the bridge he was intending to destroy. The story has been retold to audiences for over a century in silent film, movie, television, a comic book and in a Johnny Depp music video.

But the best insight into the satirical genius of Bierce, and his crusade for the basic canons of liberty, first appeared in newspapers in 1881, and became his alternative 1911 reference book, The Devil’s Dictionary, offering a skewed reinterpretation of common words, mischievously revealing life’s larger “truths.”

At the age of 71, in 1913, Bierce left El Paso, Texas, on horseback for Juarez, Chihuahua, Mexico, reportedly carrying $2,000 in gold. He vanished into the mists of time. His fate—and gravesite—were investigated and speculated on for years. Both remain unknown.

In a published letter to a niece, he’d quipped “to be a gringo in Mexico—ah, that is euthanasia.”