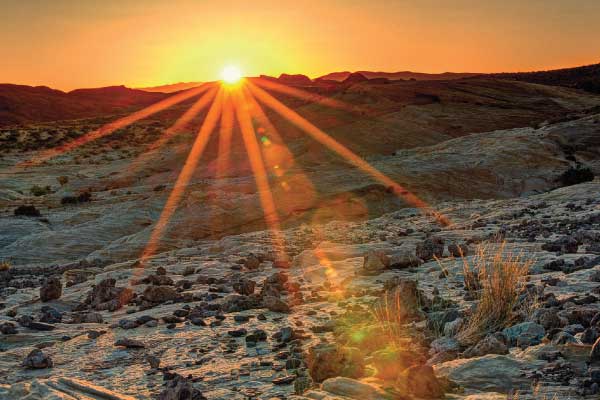 I’m standing in Mesquite, Nevada, with Max McCoy, historian, teacher, journalist, novelist, traveler and writer who knows how to turn a phrase.

“This scenery,” he says, “makes me want to really [mess] someone up.”

Good thing Max isn’t going with me on this trip. I’d hate to be messed up. And much of Nevada’s scenery is… well…desolate.

But there’s much more to do in this state than lose money in casinos. Especially this year.

How’s this for history?

Congress usually required a population of 60,000 for statehood. Nevada had 40,000, but the Civil War was going on, Republicans controlled Congress, and—as anyone who has ever seen the rollicking 1940 Errol Flynn-Randolph Scott Western Virginia City knows—the Comstock Lode silver deposits were worth having.

Besides, Abe needed Nevada to pass that 13th Amendment and ban slavery. So Nevada’s constitutional delegation sent the proposed state constitution—by telegram, at the time the longest ever—to Washington D.C. The bill on that wire? $3,416.77.

So this state is rich in history. Besides, I’ve just proved Max wrong. I’ve found a place in the desert that’s beautiful.

About 75 minutes southwest of Mesquite lies Valley of Fire, Nevada’s oldest and largest state park. Established in 1935, Valley of Fire features Indian petroglyphs and absolutely stunning vistas of red sandstone formations. If this scenery looks familiar, slide your copy of The Professionals into your DVD player. It was filmed here. So were parts of many other Westerns.

The Lost City Museum in nearby Overton, which sits on a prehistoric site of Puebloan Indians, also preserves the history of those ancient settlers of the Moapa Valley.

Now drive to Caliente, a small railroad town rich in history. Two slaves who had escaped from Arkansas settled nearby, and Zane Grey liked to hang his hat in the area.

Into the Great Basin

In Ely, which grew from stagecoach station to copper-mining town, the Nevada Northern Railway and its circa 1905 main-yard complex are musts. And—because Nevada is one strange state—each June, folks race bathtubs converted into boats during “Cocktails and Cannons” at Cave Lake State Park.

Next stop is Eureka, where silver was discovered in 1864. By 1878 Eureka was Nevada’s second-largest city, boasting a population of 9,000. You won’t find many people here today, but the opera house, courthouse and Jackson House Hotel aren’t to be missed.

If you’re a big fan of cowboy poetry, visit Elko. The National Cowboy Poetry Gathering is held each January, but the Western Folklife Center isn’t just about Baxter Black and Waddie Mitchell. The center honors the everyday traditions of people who live and work in the American West.

Now we’re on to Winnemucca, a town that cherishes its cowboy and Basque cultures. It was named after Sarah Winnemucca, the daughter of a Paiute leader. Step inside the Humboldt County Museum—located in a 1907 church and next door to Pioneer Park. If you’re here in June, don’t miss the Basque Festival.

Let’s try another mining town with a different history. Empire was founded in 1923, but not for copper, gold or silver. The gypsum mine—yes, gypsum—was one of the longest continually operating mines in American history, not shutting down until 2011. Some mining buffs think of Empire as the “last company town.”

Of course, no one’s ever mistaken Reno for a ghost town.

Reno was established in 1868 during construction of the Transcontinental Railroad, but its claim to fame probably begins in 1931. That’s when the state Legislature legalized gambling and quickie divorces.

There’s no divorce museum in Reno, although the “Neon Lights” exhibit at the Nevada Historical Society museum examines divorces, gambling, etc., and the museum itself is historic. Founded in 1904, it’s the state’s oldest cultural institution.

Another institution is Virginia City, and I mean the entire town. The Comstock Lode silver discovery led to the founding of Virginia City, and although most of the mines had played out by the mid-1870s, this town is far from a ghost town.

Mark Twain called it the “‘livest’ town, for its age and population, that America had ever produced.”

You’ll find roughly a dozen museums, but the entire city is practically a living history museum, and was declared a National Historic Landmark in 1961. I wonder if Bonanza, NBC’s hit TV series, had anything to do with that.

Although Indian and white settlers had been in the area for years, Carson City’s true beginnings were around 1851 when a trading post on the Carson Branch of the California Trail was established. And then, of course, the Comstock discovery was when Carson City boomed.

Let’s try some more of those ghost and quasi-ghost towns, because Nevada has plenty. To wit:

Tonopah, the “Queen of the Silver Camps,” sprang up late when silver was discovered in 1900. You can explore actual mines at the Tonopah Historic Mining Park and check out the displays at the Central Nevada Museum.

Nearby Belmont boomed after silver was discovered in October 1875. Its historic courthouse is open for tours on select summer afternoons.

Gold—not silver—led to the founding of Goldfield in 1902. “Money was flowing like wine,” Wyatt Earp is said to have written to his brother Virgil, and Wyatt would’ve known. He moved his mahogany bar from Northern Saloon in Tonopah to Goldfield in 1903. Virgil joined Wyatt here in 1904. And the bar? It might have moved to Rhyolite—without Wyatt—and found a home in the Monaco Saloon. Even if it didn’t, Rhyolite, near the desert town of Beatty, is worth checking out. It sprang up around 1905, but the mine closed in 1911, and Rhyolite dried up.

In fact most of this country has dried up, which would make Max McCoy want to really mess somebody up. If you start feeling that way, head over to Ash Meadows National Wildlife Refuge, the Mojave Desert’s largest
oasis. It’s also home to Devil’s Hole, a 40-acre detached unit of Death Valley National Park.

Before you stop in Las Vegas, grab a burger at the Pioneer Saloon. You’ll find this fun little bar in Goodsprings, established in 1913. Not every bar can claim to have served Clark Gable, who spent three days here in 1942 while waiting to learn of the fate of his wife, actress Carole Lombard, who was killed in a plane crash at Mount Potosi.

Then visit Sin City, but remember that Las Vegas has history as well as slot machines. The Old Las Vegas Mormon Fort Historic Park contains the oldest non-Indian structures in southern Nevada. The fort was established in 1855 on the Old Spanish Trail. And the Mob Museum is absolutely amazing—and its docents won’t break your kneecaps.

The Nevada State Railroad Museum in Boulder City is first-rate, and the Boulder City Hoover Dam Museum offers a great look at our final stop.

Which brings us to Hoover Dam.

An Army survey leader called the area a “profitless locality” in 1858. Today, it might be one of the West’s most important and most visited manmade sites.

Construction began in 1931. It was finished in 1936, ahead of and under budget. Dam and power-plant tours have been conducted since 1937, but you can also walk across the Mike O’Callahan-Pat Tillman pedestrian bridge.

The view is inspiring. If Max McCoy saw this, he’d never want to mess anyone up.

Good Books: Blood Aces: The Wild Ride of Benny Binion, the Texas Gangster who Created Vegas Poker by Doug J. Swanson; The Money and the Power: The Making of Las Vegas and Its Hold on America by Sally Denton; Roughing It by Mark Twain; Comstock Women: The Making of a Mining Community edited by Ronald M. James, C. Elizabeth Raymond; Bonanza: A Viewer’s Guide to the TV Legend by David R. Greenland.

In all his stops in Nevada, Johnny D. Boggs has never placed a bet. What are the odds of that?