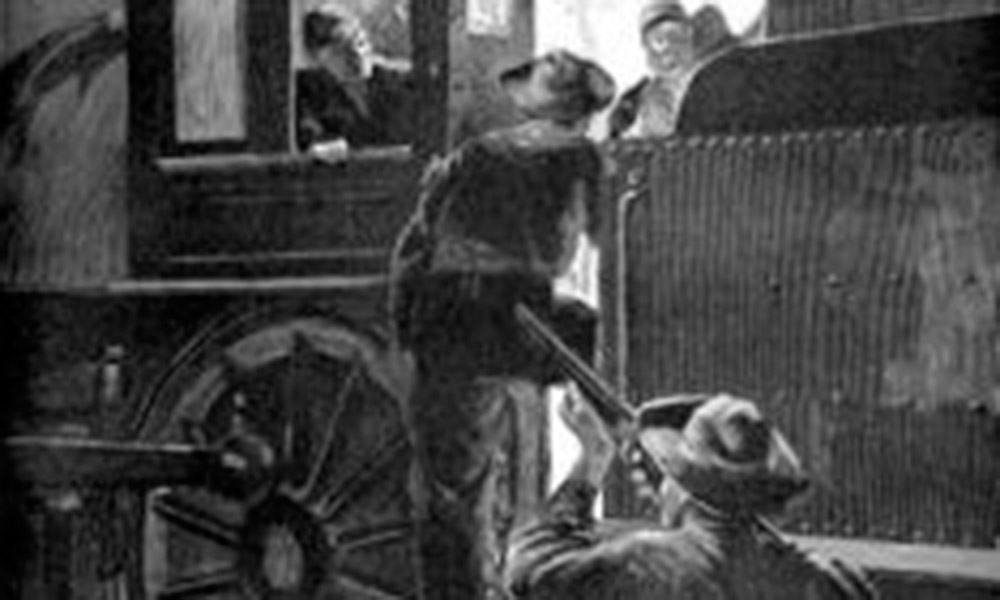 Arizona had its share of zany occurrences but none can top the Burt Alvord Gang from Willcox. Burt was a big, burly good ol’ boy whose major interests were poker, pool, guns, horses and practical jokes. He definitely wasn’t the sharpest knife in the drawer.

Despite his low IQ Cochise County Sheriff, John Slaughter made him a deputy and later declared Burt was absolutely fearless.

This would inspire the city leaders in Willcox to hire him as marshal to bring law and order to their raucous cow town. Burt quickly tamed the town and then boredom set in.

Burt figured nobody thought he was smart enough to pull off a train robbery and nobody would consider him to be one of the “usual suspects.”

On September 9th, 1899 constable Burt Alvord and his part-time deputy, Billy Stiles, along with Bill Downing and Matt Burts decided to elevate their economic station in life by robbing the Southern Pacific as it was chuffing its way up the long grade between Willcox and Cochise Station.

To establish an alibi they set up a poker game in the back room of a Schwertzer’s saloon across from the train station. Earlier Burt had bribed a waiter to bring a fresh round of drinks every few minutes, empty their contents outside the window, then re-enter the bar declaring how “them boys were sure guzzling the booze.”

They hijacked the train near the Cochise Station then rode back to Willcox to resume their poker game.

Legend says they got away with $60-80 thousand in gold coin. Exaggeration was a cherished right in the Old West. Actually it was only two to three thousand dollars.

Before reaching Willcox, Burt said he would stash the loot in a safe place until things cooled off.  He gave the boys a small allowance told them not to spend lavishly so as to not arouse suspicion.

They returned to the saloon, climbed back in the window and continued to play.

Meanwhile, the train backed into Willcox and the engineer went looking for the marshal. Locals told him Burt could be found down at Schwerner’s playing poker in the back room.

He burst into the back room of the saloon, hollering “Marshal, the train’s been robbed.”

He looked at the three boys sitting at the poker table, “I deputize you, you and you” he said to his fellow train robbers.

Immediately, the he four mounted their horses and rode off into the night in hot pursuit of, er, themselves.

Not surprisingly, they returned several hours later claiming the train robbers had vanished without a trace.

As far as I know, it was the only time in history a posse chasing train robbers was in hot pursuit of themselves. I wonder if Butch Cassidy ever thought of that one.