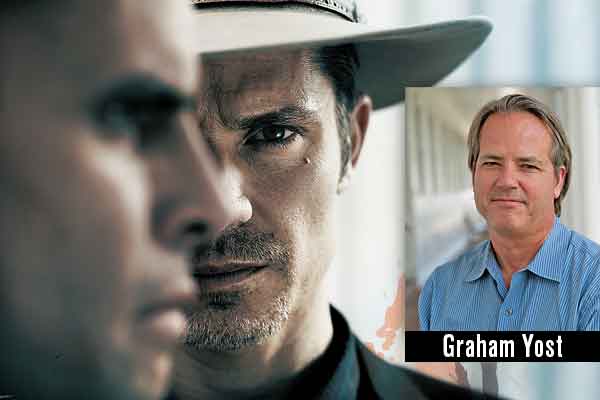 The success of FX’s Justified, created by Graham Yost from Elmore Leonard’s short story “Fire in the Hole,” is by now as familiar as Raylan Given’s Cattleman’s-style hat crafted by Baron Hats.

A high-quality hit from the get-go, Justified is populated with Leonard’s complex characters and driven by Yost’s creative stewardship. The writer and producer responsible for Speed, Broken Arrow and the superb Boomtown feels his primary task is to remain creatively true to Leonard’s world, a sentiment shared by star Timothy Olyphant.

The fact is, Justified not only honors Leonard, but also admirably builds on his legacy by keeping a sly, literate bent to the scripts without sacrificing dramatic energy. It is great television.

The second, Emmy-winning season featuring Mags Bennett (Margo Martindale) and her boys raised the bar for the series. The third season, just released on DVD, blasted Raylan with rough problems, including the Dixie Mafia, Boyd Crowder’s turf war, a psychopathic hitman and a fear of fatherhood.

Leonard’s 2012 novel Raylan supplied the show with guideposts for its second, third and newest season, thus allowing Yost and company to more deeply explore the world of rural crime as depicted by one of America’s premiere writers [Warning: Spoilers ahead]:

“In Elmore’s opening story in the Raylan book, there’s a character called Angel who gets his kidneys cut out and ransomed back,” Yost says. “We came up with our version because the only character we wanted to see that happen to was Dewey Crowe, who’s a favorite. We did what we call our ‘Kidney Episode’ with Dewey. Elmore told us ‘Just hang the book up and strip it for parts,’ so that’s one of the parts we picked. We’re actually using a chunk of the novel for season four.

“We have the utmost respect for Elmore Leonard; it’s fun for us, because we love all his characters. It makes our lives easier, because Elmore’s done the heavy lifting by creating the characters for these situations.”

The writing team refashioned Leonard’s character Pervis Crowe into Mags Bennett; she and her brood proved to be great foils for Raylan. In season three, Robert Quarles stepped in as the heavy villain.

“Mags was someone you feared, but you liked. You respected her, and it was very sad when she took her own life at the end of that season. With Quarles, we wanted to create someone that we’d look forward to seeing Raylan kill,” Yost says. “The trick for us was actually not having Raylan kill him, but still have it be a satisfying ending.

“At the same time we created Quarles, we also created Ellstin Limehouse, who’s not really a straight-out bad guy. He’s a man of mystery: is he bad, is he good? What game is he playing? In many ways, he’s more like Mags Bennett. You admire him as well as fear him. As one person said, ‘It took two big men to fill the small shoes of Mags Bennett.’”

Neal McDonough was cast as the insane Quarles. Yost had worked with him on Band of Brothers and Boomtown, and felt he would be a good fit. Mykelti Williamson, also from Boomtown, was perfectly cast
as Limehouse.

The history of these Leonard-inspired characters is as important to Justified as the action. “They can’t escape their past,” Yost admits. “One of the great strengths of the show is that we’re all pulling in the same direction; that’s guided by Elmore Leonard. Some weeks we do better at achieving that than others, but that’s always the goal. If you watch the show closely, you’ll see that each writer has their own voice, just like each director is different. My job is to corral all of that. Then there’s Tim, who has a big impact on the re-writing of the scripts. So it really is a team sport.”

After an extraordinary season two, Yost admits the team “felt a lot of pressure” going into season three. “But we decided to do something different and not have another homespun bad guy down in Harlan. Frankly, that’s how we’re approaching season four as well. I think we were worried about becoming a “bad guy of
the year” show, and we didn’t want to do that.”

With season four now showing on FX (it premiered January 8), Yost hopes fans appreciate how the team has not stuck to patterns. “We don’t want to repeat ourselves. It’s not easy writing this show; we’re banging away in the writer’s room right now. It’s difficult, but that’s what we get paid to do. And we love Elmore Leonard’s world. We feel very lucky to be writing this show.”