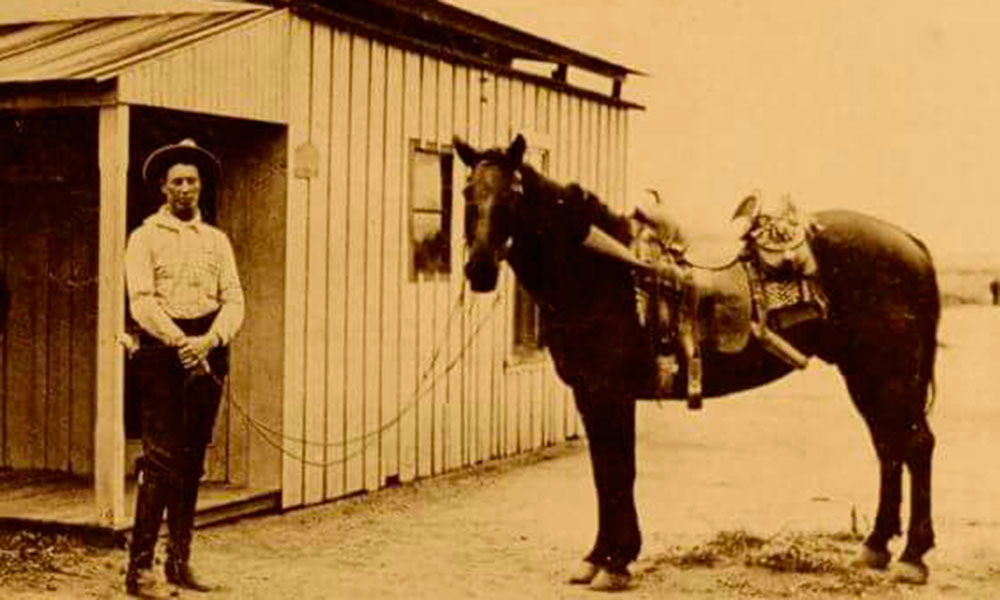 The dawning of the 20th century brought little improvement to the notorious reputation Arizona had earned during the tumultuous years of outlawry and the Indian Wars. The close proximity to Mexico and the rugged mountain wilderness in the eastern part of the territory made Arizona the sanctuary of choice for outlaws who had been driven out of other parts of the Southwest.

The remoteness of the terrain made pursuit and apprehension of these desperadoes next to impossible. Local ranchers lacked the ability to combat the gangs who brazenly rustled cattle on both sides of the border. Cattle rustlers operated in broad daylight and even bragged about it. Many ranchers feared the outlaws so much that when a posse did enter a remote area, they were reluctant to point fingers, for fear of retribution after the lawmen left.

County peace officers were not legally allowed to cross into another county in hot pursuit. Residents desperately cried out for a force of territorial rangers who would not be bound by county lines.

In 1901, Gov. Nathan Oakes Murphy decided to take strong action against the smugglers and rustlers by organizing a company of lawmen patterned after the storied Texas Rangers. Succumbing to pressure from the troubled parts of the territory, on March 21st, 1901, the Territorial Legislature passed a bill to establish the Arizona Rangers.

They were mostly colorful, hard-riding cowboys. Some were former soldiers with a natural ability to handle firearms. All were excellent horsemen, trackers and well-suited to take on the tough job against the Mexican border smugglers and large outlaw gangs that were still terrorizing the border country, even as the Old West was fading from reality into myth.

One of those was Jeff Kidder, a native of South Dakota. He joined the Arizona Rangers in 1903. Two years later he inherited a tidy sum following his father’s death and he bought himself a pearl-handled, silver-plated single-action 5 ½ inch barrel Colt .45.  He spent hours honing his expertise with target practicing. He fired so many rounds that in 1907 he had to send the weapon back to the Colt Company for a complete makeover. He was considered the fastest draw among the Rangers and an expert marksman. Author, Robert DeArment rated him as one of the twelve most underrated gunfighters in the West.

Kidder often worked along the Mexican border, accompanied only by his beloved dog, Jip, stalking cattle rustlers and smugglers. He had a number of clashes with gun smugglers and it’s believed he was marked for death by the Mexican border police who were in cahoots with the banditti.

Kidder, along with three other Rangers were commissioned by General Luis Torres, commander of Sonora’s northern district, to operate across the border.

His reputation as a pistoleer along the border grew with each arrest and in 1908 he was promoted to sergeant. Kidder was also becoming a thorn in the side to the Mexican border police.

On the evening of Friday, April 3rd 1908 Kidder slipped across the border at Naco to meet an informant and during an argument with a cantina girl whom he believed picked his pocket. In what appeared to be a setup, two Mexican cops burst in the room with pistols drawn and opened fire knocking him to the floor. Kidder pulled his pistol and wounded both.

Bleeding badly he struggled to his feet and tried to make his way to the American side but was blocked by Mexican line riders armed with Winchesters. A brief gunfight ensued and with his pistol empty, Kidder yelled, “todo dentro” or “all in.”

The officers pounced on the wounded Ranger, pistol-whipping him as they drug him to the local jail where they stole his valuables, including his badge and refused to give him medical aid.

After spending two hours without a blanket in a cold cell a Mexican judge ordered him removed to a private residence. A police officer stood guard while a doctor administered to his wounds. The next day his fellow Rangers were allowed to visit and a doctor from Bisbee tended to his wounds. While his faithful dog Jip waited by his side Kidder was interviewed by a reporter from the Bisbee Review and was able to tell his side of the story.

Former Ranger lieutenant at the time of Kidder’s enlistment five years earlier, Jack Foster, now a Deputy U.S. Marshal, came to be with him. Kidder seemed to rally early on Saturday but his condition worsened and the following morning he died, some thirty hours after the fight.

A large number of angry Americans gathered and were threatening to cross the border and return the Ranger’s body to Arizona. Cooler heads prevailed and the Mexican judge granted his release. Kidder’s body was taken to a funeral parlor in Bisbee.

The Rangers hoped to make Jip the group’s mascot but the dog continued to mourn his master’s death so Captain Harry Wheeler passed the hat raising enough money to send Jip to Kidder’s family in California.

Jeff Kidder and Carlos Tafolla are the only two Rangers killed in the line of duty. Both are on the wall at the Wesley Bolin Memorial Plaza at the Arizona State Capitol in Phoenix.