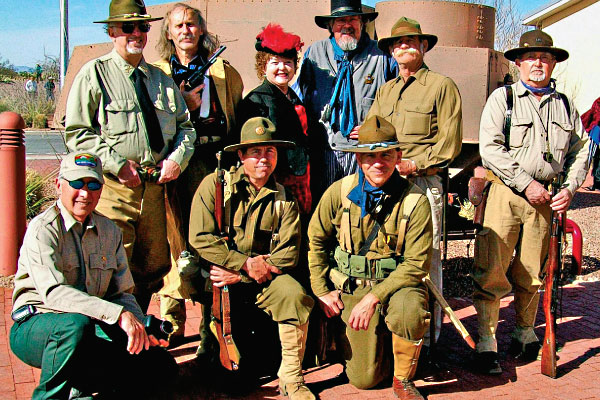 Our most curious Mexican Revolution artifact is the Jeffery Quad armored car. This vehicle was not sent to Columbus, New Mexico, for the Punitive Expedition, although Jeffery Quad trucks were. Yet after the expedition ended in 1917, the U.S. Army at Fort Bliss used the armored car in 1919, when soldiers crossed into Mexico to chase Pancho Villa during the Battle of Ciudad Juárez.

Being a heritage educator requires conducting a great deal of research to make sure you have correct information about your topic. It’s difficult because so many history books have errors and misinformation.

I fell in love with New Mexico during a summer break from teaching elementary school in Tampa, Florida, where I was born. My wife and I traveled to New Mexico in our camper in 2005; two years later, we moved to Roswell. We now live in Deming.

No one knows the interesting story about how Pancho Villa State Park got its name. Jack Breen, a deputy sheriff at the time of the 1916 raid, never believed Villa was in Columbus, New Mexico, during the raid, yet he came up with the park’s name as a sign of goodwill to Mexico.

The birthplace of the U.S. Air Force is Columbus, New Mexico. The Punitive Expedition, led from the town into Mexico, was the first time U.S. airplanes were used in a war. The park exhibits one of the Curtiss biplanes used in the expedition.

Rather than dwelling on mistakes made in the past, Camp Furlong Day honors the 18 Americans who were killed on March 9, 1916, and also promotes friendship and goodwill between the United States and Mexico.

We will probably never know the real reason for Villa’s raid of Columbus. After the raid, Villa was asked about his involvement. He stated that someday he would tell what he knew about the raid, but before he did, he was assassinated in 1923.

The heroes of the day on March 9, 1916, were Maj. Frank Tompkins and 1st Lt. James P. Castleman, both of whom received the Distinguished Service Cross for extraordinary heroism. Another hero, Lt. John Lucas, set up several Benét-Mercié machine guns and helped Castleman’s riflemen catch the Villistas in devastating crossfire. Tompkins and his men pursued Villa’s retreating force 15 miles into Mexico, engaged its rear guard four times (the first was a mounted charge) and inflicted severe casualties on the Villistas.

Locals feel Pancho Villa was both a villain and a hero. My opinion is that he was both. Villa wanted the people of Mexico to have a good and honest president, and to be free of harsh government oppression. He showed little restraint in punishing those who got in his way toward attaining that goal.

For the 100th anniversary of the raid, in 2016, the park would like to feature a talk by Apollo 11 astronaut Michael Collins; his father, James Lawton Collins, was Gen. Pershing’s personal aide. We are also planning presentations on the role of the Buffalo Soldiers in the Punitive Expedition, adventures with the 1st Aero Squadron pilots and the role of Apache scouts in the hunt for Villa.

Most people would be surprised to know that, in 1914, Villa was considered to be a friend of the United States because he protected large American businesses in Mexico from the lawlessness of the Mexican Revolution. Villa was even called the potential “George Washington of Mexico.”

A former elementary school teacher, John Read started at Pancho Villa State Park as “heritage educator” in 2008 and was promoted five years later to manager. Established in Columbus, New Mexico, in 1959, the 60-acre park is the only public park in the U.S. named after a foreign invader. The park reflects a gesture of goodwill between the U.S. and Mexico, most notably at its annual Camp Furlong Day, when Mexican horseback riders cross at Palomas, Chihuahua, to join U.S. riders in a trek to Columbus, New Mexico. The park largely focuses its exhibits on Gen. John Pershing’s Punitive Expedition that chased Villa.