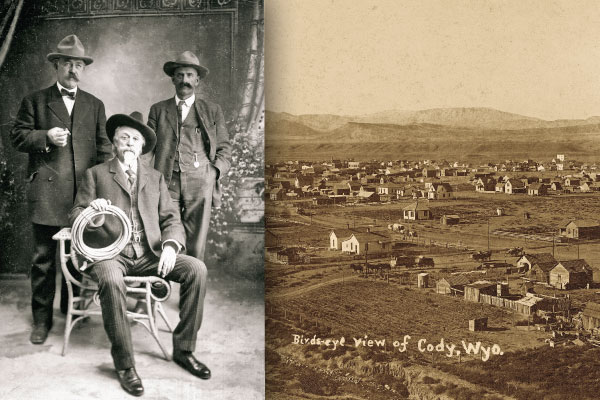 After all, it wasn’t long after the passage of the Carey Act of 1894, allowing private companies in arid states to create irrigation projects, that Beck came up with a plan to sell water to the ranchers, farmers and settlers he hoped to lure to a new town in the Bighorn Basin of northwestern Wyoming. When Buffalo Bill Cody, already a world-famous frontiersman and showman, signed on, the project was off and running.

“Like everything in the Old West, it was a pretty speculative venture,” says Jeremy Johnston, managing editor of The Papers of William F. Cody and the curator of the town’s Buffalo Bill Museum. But Cody did his part by bringing in a line of the Burlington Railroad, building the Irma Hotel and using his Wild West Show to promote the town as a stop for tourists on the way to Yellowstone National Park.

Unlike most boomtowns, Cody never went bust. Partly that was due to the ranching, mining and drilling operations that diversified the local economy, but naming the town “Cody” certainly helped. At the time, Buffalo Bill was the most famous American in the world. His show—a rowdy, melodramatic spectacle featuring real Indians and frontiersmen—had already dazzled audiences across the United States and Europe for more than a decade (and was to run nearly 20 more years). Cody’s PR value was
incalculable.

“Even today we benefit from that,” Johnston says. “Cody has plenty of interesting tourist destinations, but it’s also a strong community with a hometown feel to it, it’s not all show and display. Many residents have ties that go back to the first homesteaders. In some ways, the Old West never ended here.”

The Buffalo Bill Center of the West is the town’s number one attraction, a kind of historical emporium consisting of five individual museums and a library, all under one roof. “There are so many treasures here,” Johnston says, specifically noting artworks by Frederic Remington, Charles Russell and other artists in the Whitney Western Art Museum; a rare tepee made of hides in the Plains Indian Museum; a huge collection of rifles, pistols and shotguns in the Cody Firearms Museum; a slew of artifacts and documents belonging to Cody himself in the Buffalo Bill Museum (including “Lucretia Borgia,” the Springfield .50 trapdoor needle gun Cody used to earn his moniker); and the engaging displays on the region’s flora, fauna and geology in the Draper Natural History Museum. The McCracken Research Library holds documents and photographs.

The historic Irma Hotel, built in 1902, remains a popular place to stay, have a meal or enjoy a drink. Although it’s a popular tourist attraction, there’s no admission fee. “Just go in and eat lunch,” Johnston says. The Cody Gunfighters, a local re-enactment troupe, performs next door to the Irma during the summer months. Firearm enthusiasts will also enjoy a visit to the Cody Dug Up Gun Museum, an eclectic collection of guns dating from the Revolutionary War up through World War II.

It’s easy to see why Cody has become known as the Rodeo Capital of the World. Not only is it home to the Cody Stampede Rodeo (July 1-4), you can catch thrilling rodeo action at the Cody Nite Rodeo every single night in June, July and August. Other mark-your-calendar events include the Cody Wild West Days in May, the Wild West Extravaganza in July and the Buffalo Bill Art Show in September.