Shot and Left for Dead 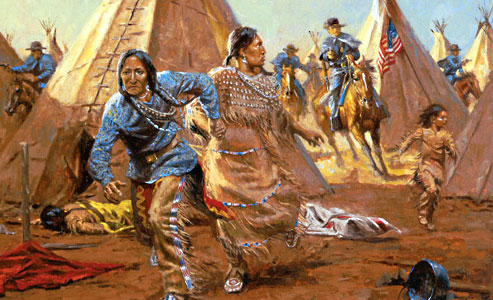 In November 1864, Medicine Woman Later and her husband, Southern Cheyenne Chief Black Kettle, set up their lodge amongst a large encampment of approximately 500 Cheyennes and Arapahos on the banks of Sand Creek in Colorado. The Indians established camp there at the behest of the U.S. Army and in response to the Colorado governor’s proclamation for all friendly Indians to seek shelter with the military authorities or be “subdued” by force of arms.

The military provided the Indians with rations while at Sand Creek, and traders visited the camp that was under the protection of the U.S. government.

A bitter cold spread through the morning air of November 29, when Col. John M. Chivington’s 675 Colorado volunteer cavalrymen unexpectedly thundered out of the darkness to attack the peaceful encampment. Medicine Woman Later was awakened by the noise, but her husband assured her she was hearing soldiers passing through. He left the lodge with an American flag and a white flag, which he flew as a reminder that the village was peaceful.

The rumbling was replaced by the sounds of bugling, rifle fire and the crashing of cannon. Women and children screamed as the deadly missiles scythed through the lodges.

Medicine Woman Later joined her husband at the lodge’s entrance, where he still tried to wave off the attack. His people were fleeing the encampment, with many heading for the shelter of a nearby dry creek. At that place, a few warriors were making a stand. The soldiers’ hot flying metal cut down indiscriminately the women, children and the elderly.

While the camp emptied, Black Kettle and Medicine Woman Later headed toward the dry creek. As the howling storm of shot and shell swirled around them, they passed the bodies of many of their friends. The world suddenly went dark for Medicine Woman Later. She was unconscious, felled by either shrapnel or a bullet, and unaware that her husband knelt by her side. Black Kettle left her for dead.

He returned after the final shots of the eight-hour fight. During that time, she had awakened. Additional shots punched through her helpless body as soldiers moved through the camp. After what seemed an eternity to her, Black Kettle found her and removed her from the scene of death and atrocity.

She and Black Kettle barely survived one of the most infamous genocidal atrocities in American history, in which roughly 150 Cheyennes and Arapahos perished. The nation, including some participants, were shocked at the barbarism of the troops. A Congressional committee lambasted Chivington with the terms “cowardly,” “foul” and “dastardly” for leading a revolting butchery of mostly women and children.

Cruel history was not through with Medicine Woman Later and Black Kettle. On November 27, 1868, both were murdered during a similar surprise attack, at the Washita River, by the 7th Cavalry Regiment under George Armstrong Custer.

Survival Tip: How to Stay Warm in Cold Weather

One of the more curious popular notions is the belief that going to sleep to survive a cold weather situation is bad. The opposite is true, as a sleeping individual uses fewer calories than one taking measures to stay awake. Perhaps being knocked unconscious is what allowed Medicine Woman Later to survive that cold November day. Fire, tailored clothing, wool fabrics and heated structures all help keep out chills. Eskimos advise that to stay warm in the cold, you should bundle up as well as you can, pull those arms in from the coat sleeves and wrap them around the torso to help keep your core temperature at a safe level. If sleep comes, allow it to happen. If you force yourself to stay awake and shiver, exhaustion may speed the onset of the shivers, which is one of the first symptoms of hypothermia. Listening to your body’s desire to sleep saves calories you may need to get to a warmer location later or to await rescue.

History in Art
By Illustrator Andy Thomas
After raising a flag of truce and an American flag, Black Kettle encouraged his people not to resist. Army troops fired into the crowd anyway. The 65-year-old chief returned to his lodge to get Medicine Woman Later and bring his wife to safety. They were among the last fleeing from the camp, past the bodies of their friends. With a young boy running behind him, the question becomes: who will the soldier shoot?