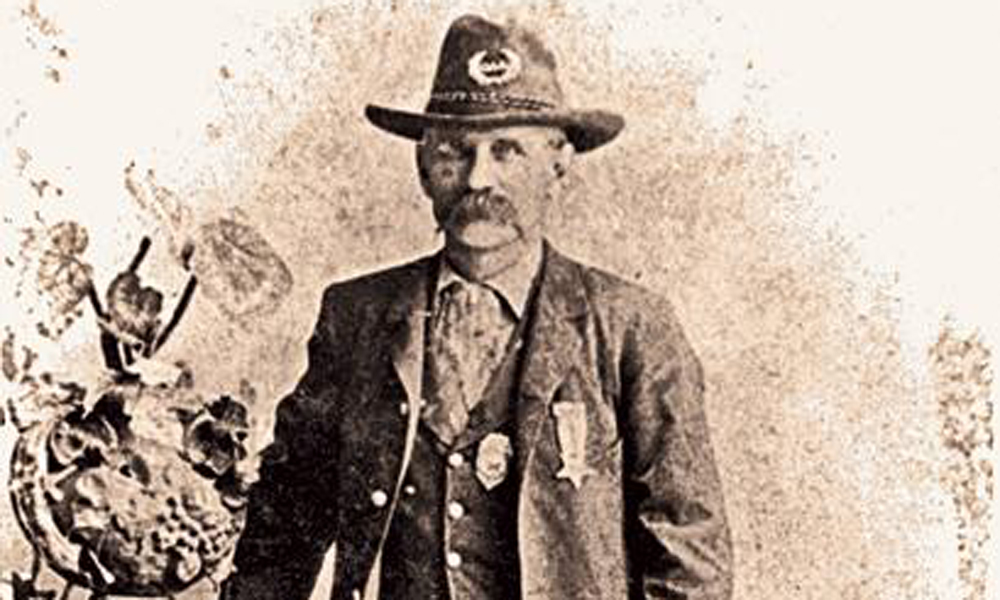 About the same time John Selman shot and killed Bass Outlaw John Wesley Hardin rode into El Paso and hung up his shingle as a lawyer. The newly-minted lawyer was representing a cattle rustler named Martin Mrose who was wanted on a charge of rustling cattle and was hiding out in Juarez. During Martin’s absence Hardin was also trifling with Martin’s wife, a former prostitute named Beulah. She was also holding several thousand dollars of Martin’s money that Hardin coveted even more.

Hardin arranged to have Martin brought across the Rio Grande on the evening of June 29th, 1895. Also present were U.S. Deputy Marshals George Scarborough, Jeff Milton, Texas Ranger, Frank McMahan and possibly John Selman, who proceeded to gun down Martin Mrose. Hardin had promised to pay them to do the deed.

Soon after the murder of Mrose, Selman’s son John Jr., an El Paso police officer, arrested Beulah for public drunkenness and disorderly conduct. On the afternoon of August 19th, Hardin, taking umbrage at Junior’s act, accosted John Sr. and heated words were exchanged but Hardin was unarmed at the time.

Late that evening Hardin was sitting at the Acme Saloon rolling dice when Selman walked up behind him and fired a bullet into the back of his head killing the famous gunman instantly. Then he fired three more rounds into Hardin’s body just for good measure.

Stanley Good, who as a child, was present at the shooting, said that as a teenager he learned that John Selman Jr. had a rifle trained on Hardin from across the street just in case his dad need help.

Leon Metz, Hardin’s biographer, says the reasons why Selman decided to kill Hardin aren’t known.  Some historians believe that Hardin didn’t give him his cut of the blood money to kill Martin Mrose.

“When it comes right down to it,” Metz says, “we don’t really know why Selman shot and killed Hardin.  We do know they argued in the street short before Hardin’s death, but about what, we don’t know

During the inquest there was conflicting testimony over whether Hardin was shot in the front or from behind. Reverend E. H. Higgins summed it up when he was called in to examine the body. When asked how the body looked he replied, “Better than I ever saw him.” He went on to say if Hardin was shot from the front it was, “remarkably good marksmanship and if he was shot from behind the right ear it was probably remarkably good judgement.”

The first trial of John Selman Sr. ended in a hung jury.Then things began to unravel for Old John Sr. On April 2nd, 1896, 21-year-old John Jr. decided to elope across the border to Juarez with a 15-year-old Mexican girl from a prominent family. When they couldn’t find a priest to marry them the two lovebirds headed to a local hotel for the night. The young girl’s mother notified the Juarez police and they searched the hotels until the young lovers were located. The would-be bride went home with mama and Junior was carted off to the calabozo.

Four days later Old John, drinking heavily, tried to enlist Marshal George Scarborough to help break Jr. out of the Juarez jail. When George refused, the two got into an argument and the talking soon ended. The marshal put four bullets into Selman, who died a few hours later. Old John lived by the gun and died the same way.

Scarborough was mortally wounded in a gunfight with two train robbers in Arizona and died on April 5th, 1900, exactly four years after he shot John Selman.

Epilogue to the sad love story: John Jr. broke out of jail a month later but in the interim mama wisely sent her daughter off to Mexico City and the two were never joined in holy matrimony.