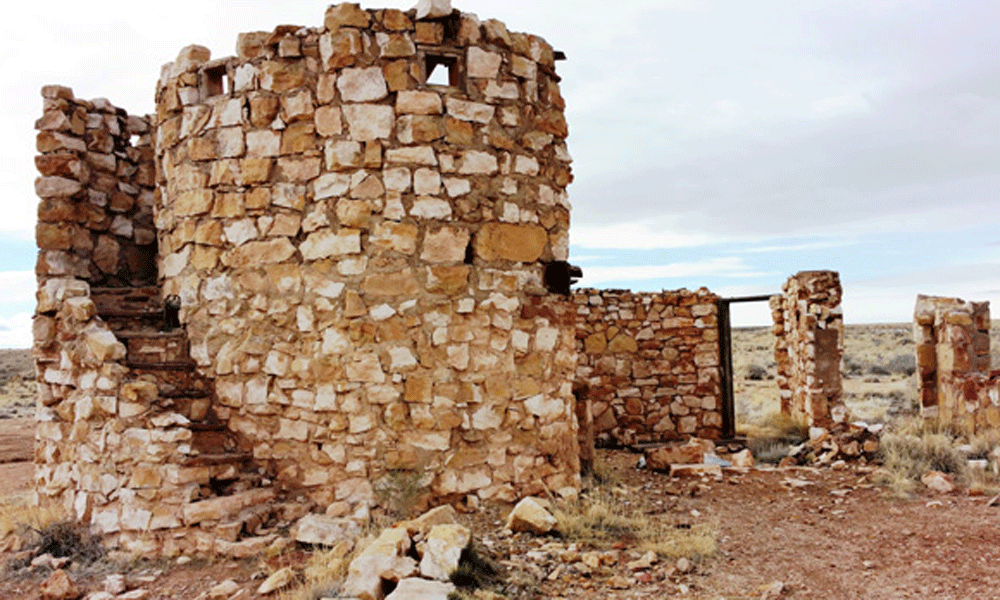 When a group of Apaches raided a Navajo encampment near the Little Colorado River in 1878 and killed all but three people, the Navajo leaders sought vengeance.

Twenty-five Navajo warriors were sent to find the attackers and take revenge. They eventually tracked them down in a cave near Canyon Diablo. The Apache had sought shelter for themselves and their horses but the Navajo scouts felt the hot air from their campfire emanating from the cave.

The Navajo gathered dry wood and brush and started a fire at the entrance of the cave. The Apaches killed their horses and used their blood in an attempt to put out the flames. Then used their corpses to block the cave’s entrance.

One Apache escaped, begging for mercy at the Navajos’ feet. After learning that the three survivors of the Little Colorado River attack had died, the Navajos showed no mercy, shooting their guns into the cave, reigniting the fire and ultimately suffocating forty-two Apaches inside.

After the massacre, the Apaches never raided the Navajo people again. Much like the avoidance of a “death Hogan,” none of the tribes in the area will use the cave for any purpose as they believe it to be cursed.

Two Guns is located on old Route 66 where the highway and today’s I-40 cross Canyon Diablo.

It’s said that during the winter of 1879-1880, Billy the Kid and his cronies hid out in a cave on the west side of the canyon across from the massacre cave.

Following the Canyon Diablo train robbery in 1889 the four Hashknife cowboys were captured by Yavapai Sheriff Buckey O’Neill and his posse and sent to prison. After their release one of them said they had stashed some of the loot, including some rifles in the canyon rim where the massacre took place. It’s one of the many lost treasures in Arizona.

During the early part of the twentieth century, settlers briefly occupied the town of Two Guns near the cave, but after a series of strange events, many left, saying the area is cursed. Residents reported strange groans and ghostly footsteps, and mysterious disasters and disappearances.

The story of Two Guns took on a new life when, in 1922, Earle and Louise Cundiff acquired the property where the Old Trails Highway and future Route 66 crossed Canyon Diablo and built a trading post. Later, they added a restaurant, gas station and rental cottages.

The Cundiffs leased the property to a con man named Henry Two Gun Miller. He falsely claimed to be an Apache chief named Crazy Thunder. He also called himself Indian Miller and dubbed the site of the 1878 massacre, “Mystery Cave.”

Miller hired a Hopi Indian to build stone structures that resemble a prehistoric village which he named Fort Two Guns.  It housed a living quarters, gift shop, and a zoo where he kept wildlife embracing everything from coral snakes to cougars including rattlesnakes, gila monsters, mountain lions and bobcats. They say that at one time or another every one of his critters either bit or took a bite out of him. A mountain lion almost had him for breakfast and a bite from a gila monster had him laid up for months.

He might well have been named “Scoundrel” Miller as he sold the skulls and bones of the Apache found in the cave in his gift shop. In 1926, during an argument over the lease, he murdered Earle Cundiff, and somehow managed to beat the rap.

He also had domestic problems. One story has it that his wife, seeking a more glamorous lifestyle, cleaned out their bank account one night and took the train for New York City.

In 1930 the eccentric Miller seems to have left Arizona one step ahead of the law. He opened another similar business in New Mexico where he remained until his death in 1952.

Louise Cundiff and her new husband returned and rebuilt the business but a fire wiped out the big trading post in 1934. That same year a resident named Ray Thomas was committed to an insane asylum.

During the 1990s another entrepreneur, Howard Armstrong, bought the property with plans to restore it but he died of a stroke. His caretaker, Jimmy Solinger, worked diligently to keep people from vandalizing the old structures but eventually he committed suicide.

It seems the curse of the cave at Canyon Diablo lives on.

I grew up in the small railroad town of Ash Fork in the 1940s until the mid-1950s. I remember those tourist traps and curiosity shops along the Mother Road between Kingman and Holbrook but none ever came close possessing the mysterious aura as the cursed site that resembled an old abandoned prehistoric Hopi village nestled on the edge of Canyon Diablo.