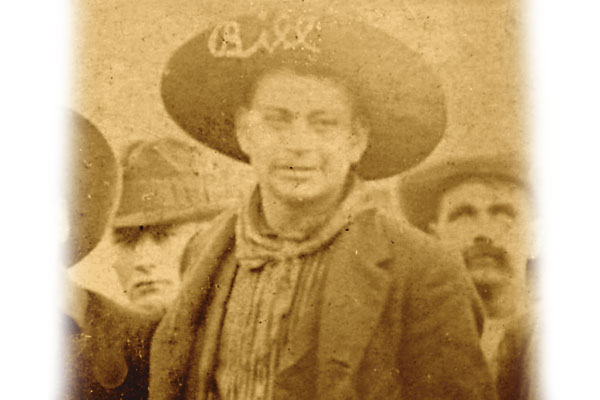 Back on April 3, 1860, a rider headed out of St. Joseph, Missouri, carrying saddlebags of mail to Sacramento, California. The Pony Express was born. It lasted just a year and a half, but its legacy and legend continue to this day.

A piece of the company’s history almost fell down in early February of this year.  Winter weather caused water damage to an early 20th-century building owned by the Pony Express Museum. Part of the Goetz Bar’s south wall collapsed, threatening the entire structure. The city of St. Joseph condemned it. The building—used for museum storage—had a doubtful future.

The city worked with the museum, insurance companies and structural engineers to find a solution. The wall is temporarily stabilized. Insurance will cover repairs to the bar. And museum officials are considering plans to renovate the Goetz—the bar is still intact—into a restaurant or rental facility at some point in the future.

In the meantime, the museum, along with the Patee House Museum and the house where Jesse James was killed, remain big tourist draws: 800-530-5930.

When the Skirvin Hotel opened its doors in Oklahoma City back in 1911, it was one of the top places to stay in all of Oklahoma. It featured two 10-story towers; a third was built in the 1930s. It eventually was listed on the National Register.

But it fell on hard times, and in 1988 the Skirvin was abandoned (ghosts reportedly walked its hallways). And it stayed that way until last February when Marcus Hotels and Resorts brought this bit of history back to life. Among other things, the original exterior was restored. It wasn’t cheap—the renovation cost $55 million dollars and used both state and federal historic tax credits. But it brought the Skirvin back to its former glory and new purpose, featuring 225 rooms and more than 22,000 square feet of meeting space. The hotel is now part of the Hilton chain.

In June, Oklahoma’s State Historic Preservation Office recognizes Marcus’ work with a citation of merit. The presentation takes place at the Skirvin Hilton: 405-272 3040.

The Cherokee Nation changed the very makeup and heritage of the tribe in March. A vote by members removed more than 2,800 people from the tribal rolls.

Back in the mid-19th century, Cherokees owned slaves—blacks, Indians and some of mixed descent. When slavery was outlawed at the end of the Civil War, a treaty gave these Freedmen Cherokee citizenship.

Then Congress passed the Dawes Act in 1887, giving parcels of reservation land to individuals. To allot this land in 1904, the feds differentiated Cherokees from Freedmen based on physical appearance. If you looked like an Indian, you must be a Cherokee. Not exactly fair, but that’s the way it was.

In March 2006, the Cherokee Nation Supreme Court ruled that the 1866 treaty did give Freedmen membership in the tribe. Soon after, a group of Cherokees—supported by Principal Chief Chad Smith—called for a vote on whether or not to allow the Freedmen to retain tribal citizenship.

At the March 3, 2007, election, nearly 77 percent of the 8,700 ballots voted to strip the Freedmen of Cherokee citizenship.

But the case isn’t closed. When the Seminole Tribe voted out its Freedmen in 2000, Washington threatened to cut off the tribe’s federal programs and gambling rights. The Seminoles caved and allowed the Freedmen to stay.

Think of the implications if the vote is upheld. One of the most famous historical figures in tribal history was a Freedman descendant. His appearance would have classified him as a Freedman, if he’d been alive in 1904. But he proclaimed his Indian heritage proudly, especially in his nickname: Cherokee Bill. Mixed-blood Bill just doesn’t sound quite right.

Back in 1907, the Atchison, Topeka & Santa Fe Railroad built a new stop in New Mexico. The ATSF decided to call the depot (and town) Clovis.

Things have been pretty quiet in the small agricultural town through the years—except maybe when that kid with glasses came over from Lubbock, Texas, and recorded at Normal Petty’s studio back in the 1950s. Who knew that Buddy Holly would have a hit with “That’ll Be the Day?”

Well, things are hopping again as Clovis celebrates its 100th birthday this summer.  There’ll be parades, receptions, banquets and various events. The history of the place is all around, even today—the depot still stands where it was built back in 1907. Maybe even the ghost of that Holly kid will show up: 505-763-3435.

Park Yourself In Utah

Back in 1957, Utah was the last state to set up a parks and recreation program.  But when it did, boy did it get going.

Wasatch Mountain, near Heber City and Midway, southeast of Salt Lake City, was the first state park.  Since then, 41 other areas received that designation. Many of these areas have wonderful Old West stories to tell (even beyond Butch Cassidy and the Wild Bunch).

Throughout 2007, the Utah State Parks is celebrating its 50 years of protecting its natural and cultural resources. The celebration offers too many events to list here, but the info is at stateparks.utah.gov or 801-538-7220.