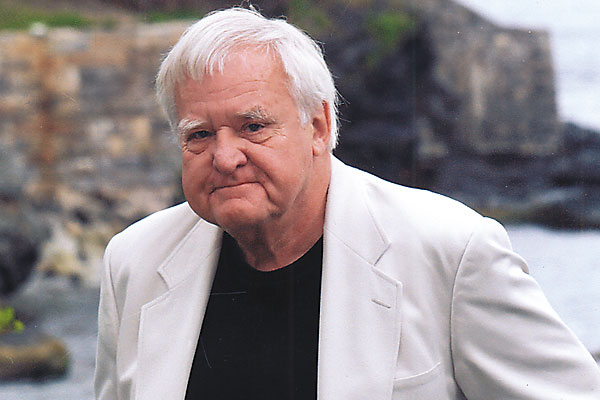 “I love Newport because it is history preserved,” John Jakes writes in the afterword of his latest novel, The Gods of Newport. “I contrast this with my first adult visit to Boston, a week spent there to research The Rebels, the second volume of the Kent Family Chronicles. Eagerly I went to the site of the Boston Tea Party. I found real estate built on landfill, a dull green office building, a bronze plaque.

“‘Developers’ have ‘developed’ and are continuing to ‘develop’ our history out of existence. Their tools are the wrecking ball.”

Jakes, known for his best-selling Kent Family Chronicles and North and South trilogy, has long loved history, including Western history. Plus Western films and Western literature.

During a career that began in the early 1950s when he was in college, Jakes has published several Western short stories, including the Western Heritage Wrangler Award-winning “Manitow and Ironhand” (1994) and novels, ranging from the young-adult The Texans Ride North (1952), his first novel, to the traditional Wear a Fast Gun (1956) to the sweeping historical California Gold (1989).

Yet the West is also prominent in many of his more “mainstream”—a word he dislikes—novels. The Transcontinental Railroad is covered in The Warriors (1977), and the Washita massacre is a central part of Heaven and Hell (1987). Buffalo Bill is spotted early in Germany in Homeland (1993). Jakes has even written a children’s book, Susanna of the Alamo (1986).

On June 16 in Springfield, Missouri, Western Writers of America will present the Owen Wister Award to Jakes for lifetime achievement.

TW: How important is preserving history to you?

Jakes: I can’t place too high a value on preserving the way it used to be because once it’s gone, it’s gone. It’s kind of like knowledge. It’s important that it be preserved for its own sake. I don’t care if it makes anybody any money.

In your last three novels, you’ve covered Newport, Savannah and Charleston. Any thoughts of going back west?

I’ve often wanted to do a big novel about the West, but in New York, they always seem to react negatively as though I’m planning something with Gene Autry in a sequin shirt. I don’t quite know how to get around that problem.

You’ve often mentioned that your love for the Western began in 1939 when your parents took you to see Dodge City when you were seven years old.

It started with those historically-skewed Errol Flynn pictures, plus all of those other Saturday afternoon programs. Hopalong Cassidy and the whole bunch, and Roy Rogers, whom I very much liked. I never really cared much for Gene Autry for some reason, and I can’t tell you why.

What was it in Dodge City that appealed to you?

It was the crashing action on a large scale and very vibrant, dashing characters. I always say my whole mindset was poisoned by Errol Flynn movies and Max Steiner scores. Steiner was even better than the movies. I don’t know, it got me hooked on the West, and I’ve been rather that way ever since.

Let’s get your thoughts on some characters that appear in your historicals. George Custer?

I didn’t like him. I’m not a Custer fan, and that’s why I did the massacre sequence in Heaven and Hell. I’ve read a lot about him, I tried to be open-minded and I got a lot of flack from his partisans, but that’s just my take on him.

Well, a wonderful, flamboyant showman, kind of a sad figure, but certainly one of the major images that shaped the American West. Regardless of what he did for ego or money or because he needed drinking change, he was a major figure in the awareness of the American West, and so I would have to put a gold star by his name.

It’s not a person, but the building of the Transcontinental Railroad?

That is a fascinating, very emblematic episode in the American West. It was a spectacular story. Course, the guys who built the railroads were crooks.

What are your thoughts on Louis L’Amour?

He was an extremely competent storyteller. I don’t take anything away from L’Amour because he was so fantastically successful, but I always say to people he did the kind of research you could do in one afternoon at the public library. Whereas, I’ve been working on an introduction to [Will Henry’s] From Where the Sun Now Stands, and it’s such a wonderful story. That gives you a different perspective of the cowboy and Indians story that I saw at the movies.

And now you’re joining L’Amour and Henry by receiving the Owen Wister Award. How does it feel?

It makes me feel wonderful. First of all, I was thrilled and surprised out of my mind to find out about it. I never expected it in my life, and I’m just overwhelmed by it and very flattered and very pleased.