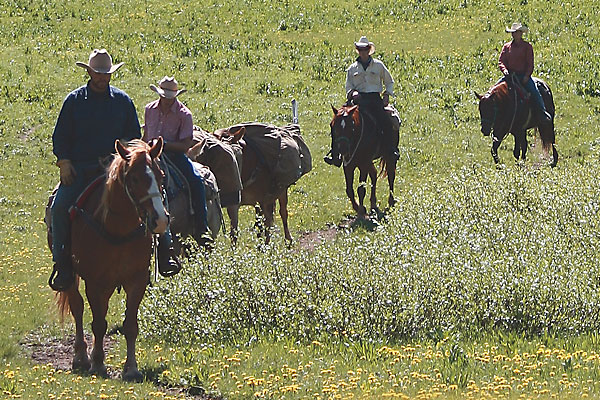 The 4×4 pickup slides in the mud as Patricia Chesser and I head toward the branding corrals on the Burnt Well Guest Ranch outside of Roswell, New Mexico.

She has spent most of her life on this ranch, bringing up two children with husband Kim, who was born at Burnt Well. Kim’s daddy came here in the 1950s, later selling the ranch to his son. Burnt Well is a working ranch, but about four years ago, the Chessers decided to start taking in paying customers.

“We wanted some sort of income,” she says, “that wasn’t dependent on rain.”

Yep, the image of dude ranches is changing. Once conjuring up City Slickers heading west to play wanna-be cowboy, riding horses nose-to-tail, eating beans and going on hay rides with plenty of corny music, today’s ranches are as diverse as sheep and cattle. Sure, you can find those old-fashioned dude ranches catering to families. But you can also find ranches as fancy as a five-star hotel … ranches that cater to the corporate retreat crowd …  and ranches that show you the real life, where guests may find themselves mending fences rather than punching dogies.

Like Stan Meador, of the X Bar Ranch near Eldorado, Texas, once told me: “It became kinda the joke in the coffee shop. ‘What do you have your tour doin’ this week?’”

The best place to start the Dude Ranch Trail has to be Bandera, Texas, the self-proclaimed Cowboy Capital of the World. Dude ranching came to Bandera in 1920 when Ed and Cora Buck began inviting paying customers to the Buck Ranch. These days, Bandera sports about a dozen guest ranches.

One of the best known is the Dixie Dude Ranch, celebrating its 70th anniversary this year. Billie and Dee Crowell, along with William Wallace Whitley, opened the Dixie in 1937. Today, Clay Conoly, Whitley’s great-grandson, manages the 725-acre spread with his wife and two young sons.

Hay wagons, horseback rides, cowboy entertainment, duplex cabins and lodge rooms, home-cooked meals and longhorn cattle (plus cashmere goats and pigs) are all found at the Dixie, an old-fashioned throwback to the dude ranches of yesteryear. Its barn and corrals look as authentic as a ranch in a Will Henry novel. About the only thing missing in the barn is Gary Cooper waiting in the loft to gun down Lee Van Cleef.

Eldorado’s X Bar Ranch Lodge & Nature Retreat is also authentic, with a history that dates to 1903 when Uncle Dink Meador established a ranch in Schleicher County. In the mid-1990s, bunkhouses were built for a hunting-lease operation, but when that didn’t pan out, the Meadors decided to develop a guest ranch business.

Sure, the 7,100-acre spread is a working ranch, and Stan Meador says “we won’t create work simply for our guests,” but the X Bar isn’t all cowboy. It’s birdwatching and biking, hiking and stargazing, swimming or just plain relaxing.

“Soft adventure is what a lot of people are looking for,” Meador says. “That fits our family.”

Best of the Big Bend

The ranch is remote, rugged, romantic and beautiful. The history is great, the food even greater and the guests have been a who’s who, including Rolling Stones lead singer Mick Jagger, news anchor Dan Rather and actor Larry Hagman (played J.R. Ewing on Dallas).

I’ve said it before, and I’ll say it again: Milton Faver never had it this good.

Texas, of course, has no monopoly on guest ranches, so lope over to New Mexico, and be enchanted by the Chessers at Burnt Well Guest Ranch.

The bunkhouse was built like an old-fashioned barn raising. Friends and neighbors came over to help put it up. Meals are served family style, and the ranch is as remote—19 miles off the main highway—and authentic as they come.

Besides, I keep thinking there has to be a Western novel in a place called Burnt Well. So I ask Kim how the name came about.

“There’s two stories,” he says. “One is that during the homestead days some sheepherders settled here. They dug a well—they weren’t squatters, they were stayers—so the ranchers came and burned them out. The other story is that there was a well here, lightning struck it and it burned down.”

The first story sounds more like a Western novel.

“So,” I say, “your family wasn’t burning out sheepherders.”

Kim smiles. “My family was sheepherders.”

From Roswell, the Dude Ranch Trail heads into Arizona, which is populated by as many guest ranches as saguaro. Well, maybe not that many.

An old cattle ranch that began taking in “dudes” in the 1940s, Tucson’s White Stallion Ranch is another one of those operations where strangers leave as friends. The True family took over in 1965, back when about 30 guest ranches called the area home. By then, the White Stallion had shrunk to 160 acres, but the Trues began expanding it. Today, the ranch sits on almost 3,000 acres (all owned, not leased), and of those 30 guest ranches, only three still operate in Tucson.

White Stallion blends that resort treatment with the guest ranch experience. The Trues run 50 to 125 head of cattle, and 100 horses, and the ranch has a rich Hollywood history (NBC’s High Chaparral filmed several scenes here).

“Well,” Russell True says as he drives a team on the hay wagon, “most of the movies shot here were … pretty bad.”

Most, but not all. On the trail ride through the rugged mountains, a guide points out that we’re heading through Movie Pass. And I can see Jimmy Stewart and Steven McNally shooting it out in Winchester ’73.

Then again, maybe I’ve been in the sun too long.

Of course, Wickenburg is one of the most Western towns in Arizona, and it’s no stranger to dudes. Which is why I find myself at the Flying E Ranch, the “best little dude ranch in the West.”

The ranch started taking guests in 1947, and remains geared toward families and repeat customers. “Nothing’s changed,” ranch manager Andrea Taylor says. “The table, the setup, the kitchen. There have been a few additions, but it’s really maintained its identity. We’ve had four generations of families come here.”

But be forewarned. If you get suckered into some card game called “99,” just remember: Guests and staff are sharpers who’d give Doc Holliday a beating.

Wit’s End Guest Ranch, Resort & Spa in Vallecito Lake near Durango offers one of the most breathtaking vistas of any guest ranch anywhere. Surrounded by peaks of 12,000 to 14,000 feet, Wit’s End, at 8,000 feet, combines rustic with elegance.

The ranch itself was founded in 1859, and the Custer family (not that Custer family) bought the property in 1988 and began turning it into one of Colorado’s premiere ranch destinations. It’s like owner Jim Custer says, “Guest ranches offer something you cannot get anywhere else: a resting place for your soul.”

Over Hill, Over Dale

Another Colorado favorite is the Sylvan Dale Guest Ranch on the Big Thompson River near Loveland. Owned and operated by the Jessup family since 1946, Sylvan Dale dates to the 1920s. You will find typical trail rides, as well as overnight pack trips and cattle drives, plus hayrides, fly-fishing … you name it.

The ranch is a perfect setting for nearly anything, from reunions to weddings to business retreats. It also offers a six-night dude ranch vacation package from mid-June to late August (starting at $1,475).

For a totally different experience, I find myself outside of Pinedale, Wyoming, at the DC Bar Guest Ranch, where owner Tim Singewald not only runs a guest ranch but also a Wilderness Guide School through his Bridger Wilderness Outfitters business. Ever want to learn how to be a packer or a guide? Tim’s your man.

But don’t think you have to be Jeremiah Johnson or as tough-looking as Tim. Besides, Jilda Senatore’s cooking will make you forget all about roughing it.

“The thing that I think is key in the guest ranch thing is stressing that you don’t have to be outdoors oriented,” Singewald says. “All you have to do is have the desire and make the decision that you want to go to the woods and learn something. And we’re small enough, we can walk them through on the personal side.”

No War in Johnson County

There’s no better place to end the Dude Ranch Trail than at the TA Ranch near Buffalo. The 8,000-acre Wyoming ranch still runs a commercial cow-calf operation, and the Madsen family offers all the ranch fodder you’d expect, from horseback riding along the Powder River Range to living history presentations. Few ranches can match the TA history. The Madsens went to great pains to restore the cookhouse, bunkhouse and main house.

After all, in the spring of 1892, those Texas invaders of the Johnson County War got pinned down at the TA by Wyoming folks who didn’t cotton to the invasion. You can still see the bullet holes in the pine barn, where guests swing into the saddle.

Don’t worry. They don’t shoot at you.