Ordeal in The Desert 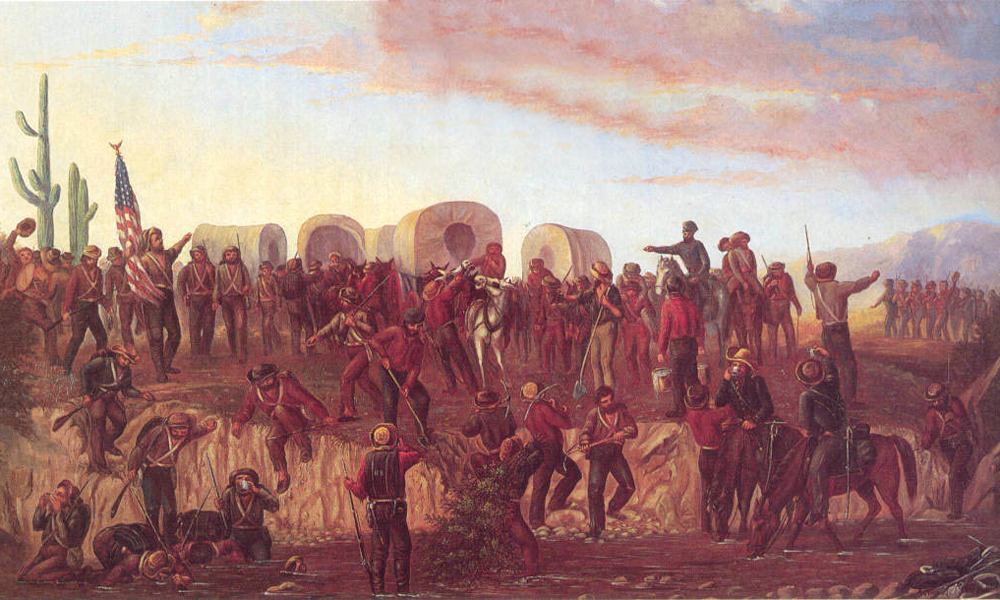 On the outskirts of Casa Grande, along what used to be the main highway between Tucson and Phoenix stands a simple, concrete monument surrounded by weeds and objects thrown from passing cars. It shows the ravages resulting from the passage of time.

The monument was erected to honor a campsite of the Mormon Battalion on December 20, 1846. Similar monuments are found along the old Gila Trail commemorating the historic trek of those citizen-soldiers during the Mexican War.

Some were erected by the Boy Scouts, others by interested civic groups or descendants of the Mormon Battalion. Some members of this famed group of road-building trailblazers returned to Arizona by way of Utah more than 30 years after the war to take root in the land and build a new life.

The battalion numbering 397 men and five women left Santa Fe on October 19, 1846 embarking on the second half of a 2,000-mile journey to mark an overland road to California. It remains the longest infantry march in American history.

Captain Philip St. George Cooke and his guides, Antoine Leroux, Pauline Weaver and Baptiste Charbonneau were trail-toughened veterans used to the forbidding mountains, waterless deserts laced by impenetrable boulder-choked canyons but the Mormons, recruited by church leaders, were unprepared for the trials and tribulations that lay ahead. They joined the Army as volunteers to show patriotism and receive government-paid transportation to California where they hoped to locate a new home for their displaced church.

Their rugged determination and work ethic eventually won the respect of the no-nonsense professional soldier assigned the inglorious task of building a wagon road along what would become known as the Gila Trail.

Captain Cooke had been disappointed at not receiving a combat command would never know that their efforts would have far greater significance than any glorious cavalry charge he might have led on the battlefield.

The Mormon Battalion left Tucson on the morning of December 18th following the Santa Cruz River northwest towards the Gila River. Seven miles north of the Old Pueblo, the river disappeared into the desert sand. The expedition set out, cutting its way through 24 miles of dense mesquite thickets towards the towering spires at Picacho.

At about 9 o’clock that evening they made dry camp. Sergeant Tyler, a stake patriarch in the Church, recorded the ordeal of that first night after leaving Tucson:

“Struggling, worn out, famishing men came into camp at all hours of the night, and the rear guard did not reach camp until near daylight.”

Resuming the march the next morning at sunrise they traveled to a place where there was supposed to be water but when they arrived, the hole was dry.

Cooke wrote: “There was nothing to do, but march on; there was the same baked-clay surface, with a little sand. At sundown a very small pool was come to; to shallow for dipping with a cup, but enough for most of the men to get a drink by lying down.”

According to Tyler there was: “….water enough to give the most of those present a drink y lying down to it, which was the only method allowed. Dipping forbidden, in order that as many as possible might have a chance to drink. The main portion of the army, however, had no water during the entire day, save a few drops which the men managed to suck from the mud in small puddle holes found by the wayside.”

Later that evening the pack mules were turned loose. Their keen instincts drove them to a small pool and they plunged headlong into the water. By the time the thirsty soldiers arrived it was either consumed or unfit to drink.

Knowing their only chance for survival was to press on; Cooke urged them to move forward. By this time the battalion was strung out across the desert for several miles.

Lieutenant George Rosecrans of C Company rode into the hills nearby and located a small spring where a few were able to fill their canteens.

The soldiers trudged on, crossing rocky arroyos and mesquite thickets. Finally, Cooke called a halt to the march:

“The battalion had then marched 26 hours of the last 36; they were almost barefooted, carried their muskets and knapsacks; the mules had worked 47 miles without water. A little wheat was now given to them.”

On the morning of the 20th, the scouts left long before sun-up and were several miles down the trail by the time the battalion resumed its march. Sometime around noon the scouts found water. Canteens were filled, loaded on pack mules and rushed back down the trail to assist the stragglers, many of whom were now lying along the trail, unable to continue.

The little concrete monument standing beside the road marks the spot where the Mormon Battalion camped on the evening of December 20th, 1846.

Will Rogers was right; you don’t need much of a monument if the cause is good. This almost-forgotten little monument deserves to stand ten feet tall for it recognizes more than just a campsite—it is a testament to the courage and perseverance of those Americans who pushed ever westward in the creation of this great nation.

Postscript. I first came upon the monument about 20 years ago. It was partially hidden in the brush and that’s what inspired me to write this story. I took a photo that has since become lost in my files. I was able to find this photo taken in 2010 by Bill Kirchner. I was pleased to see a new monument now marks the site.