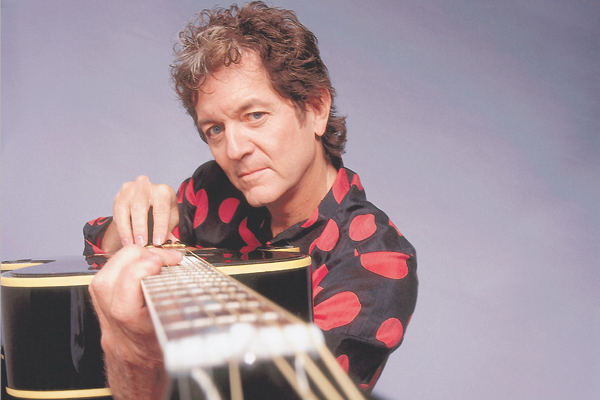 This article was supposed to be all about singer/songwriter Rodney Crowell—from his arrival in Nashville, Tennessee, in 1972 to his new CD, Fate’s Right Hand—and the way he has maintained integrity to his craft.

In fact, the interview was done, the story in the can, when the unthinkable happened.

On September 12, 2003, Crowell’s former father-in-law, Johnny Cash, died at age 71. A month later, Crowell, his heart still heavy, called back to talk about the Man in Black.

Despite Cash’s recent health problems and the death of his longtime wife June Carter Cash in May, Cash’s death staggered the world—including Crowell.

“The last time I saw him, he was in good spirits, looking good,” recalls Crowell, 53. “The world shouldn’t get used to this. If the world gets used to this, then we’re in trouble. That kind of self-made integrity, iconic artistry is real hard to come by, impossible to replace.”

Of course, Crowell seemed to be following a similar road to icon status.

As a songwriter, his songs have been recorded by everyone from Waylon Jennings and Emmylou Harris to Bob Seger and the Grateful Dead. (He has also been a sought-out record producer.) Crowell’s 1988 album Diamonds and Dirt produced five consecutive No. 1 singles. He has won a Grammy and the ASCAP Lifetime Achievement Award.

Crowell’s life got messy when he and Rosanne Cash divorced, forcing him to quit a grinding tour schedule and play a more important gig: being a father.

“I became a single parent with four children in the house and needed to really apply myself to parenting,” he says. “My children needed it. And it actually turned out to be a blessing of a lifetime for me, allowed me to reassess and reinvent.”

When his daughters moved to New York to be with their mother, Crowell took advice from his new wife Claudia. “She said, ‘You should start to think about continuing what you started a long time ago,’” Crowell says, “and I eventually really applied myself to the notion of claiming my place as an artist, as opposed to hit-maker.”

After the critically acclaimed The Houston Kid in 2001, Crowell has reaffirmed his “artist” status with Fate’s Right Hand.

“Somebody said, ‘The Houston Kid was looking back,’” Crowell says, “and I said, ‘Yeah, and Fate’s Right Hand is looking around.’”

Meanwhile, he’s working on a memoir and writing new songs. Which brings us back to Johnny Cash.

During his career, Cash covered some Crowell songs, such as “Song for the Life” and “Bull Rider.”

“He could make it sound like Abraham Lincoln was singing your song,” says Crowell, adding that one cut on Fate’s Right Hand would have been perfect for Cash.

“Had I had time,” Crowell says, “I would have gone to him and said, ‘Look, man, you’ve got to record “Ridin’ Out the Storm.” If ever I wrote a song that you should sing, that’s it.’ I just ran out of time.”

Johnny D. Boggs does a fine version of Rodney Crowell’s “Song for the Life” in the shower.