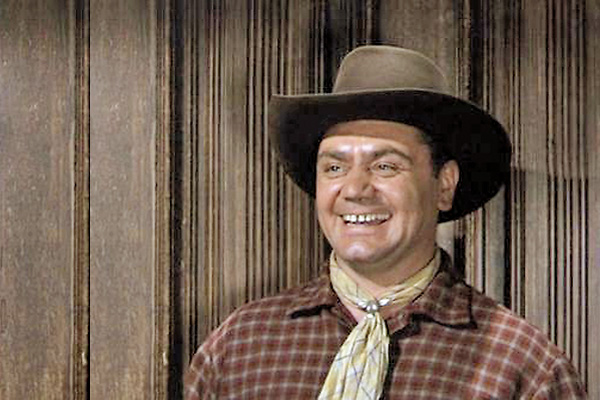 Ernest Borgnine, Oscar-winning actor and perennial favorite of movies and TV for more than six decades, died on July 8, at the age of 95. Borgnine worked in film continually from 1951 up until about June of this year, easily switching back and forth between dramas and comedies.

During his astoundingly long career he also acted in nearly three dozen Westerns. His last film, also a Western, The Man Who Shook the Hand of Vicente Fernandez, which hasn’t even been released yet, won him an outstanding acting award at the Newport Beach Film Festival this year.

Best known for his unforgettable parts in the films From Here to Eternity, Bad Day at Black Rock and Marty, as well as the hit ABC series that aired from 1962-66, McHale’s Navy, Borgnine also memorably costarred in Sam Peckinpah’s classic 1969 Western, The Wild Bunch.

Borgnine’s role as Dutch in the film was flatly not written for him, as Garner Simmons shares in Peckinpah: A Portrait in Montage: “The script description reads in part: ‘Dutch is big, young, good-natured with a fast gun hand, strong loyalty and, like Pike, a bone-deep distaste for rules and regulations. He can sing [and] has more than his share of charm.’ Ernest Borgnine was [Warner Bros. Production Chief Ken] Hyman’s choice. Peckinpah initially disagreed: ‘In casting Wild Bunch, Ken Hyman was for Ernie Borgnine in the role of Dutch, and I was against it. At that time I had never worked with Ernie and with this picture I wanted to be sure of everybody. Anyway, Ken talked me out of my reluctance, and Ernie turned out to be just one of the greatest guys I’ve ever worked with.’”

Borgnine later commented on The Wild Bunch in his autobiography, Ernie, “At the age of fifty-one, I got to do more action scenes in this film than in any of my previous pictures.”

While talking up the film with critics, Peckinpah said, “It’s a Western about the betrayal of friendship. An all-guy Western with Bill Holden, Bob Ryan, Ernie Borgnine, Eddie O’Brien, Albert Dekker, Ben Johnson, L.Q. Jones and Warren Oates. It’s about a gang of American bandits who steal a U.S. ammunition train and attempt to sell it to some Mexican revolutionaries. It’s about a convict (Robert Ryan) on parole who is ordered to track down all his former friends and gangmates. And it’s very, very violent. During the first preview, 32 people walked out during the first 10 minutes.”

But violence wasn’t the only aspect of the film folks were talking about. One scene near the end of the film, when Johnson and Oates’s characters go into a brothel and Borgnine doesn’t go in with them, made some suspect the character of Dutch was homosexual. Kevin J. Hayes shares Peckinpah’s answer to that claim in his book Sam Peckinpah: Interviews: “In the first place, I didn’t know where to put him. In the second place, he had the closest ties with Angel so he was more preoccupied with things. He was there when Angel got caught, right? It was on his mind—all he wanted to do was to get him out. That plus the fact that I couldn’t find a place to put him. Angel saved his life on the train and, you see, in many ways Dutch (Ernest Borgnine) was the conscience of the Wild Bunch.”

I briefly met Borgnine in 1976 when I was 17 years old and had just moved to Hollywood. He was the first famous person I had ever met. As I walked past the film crew set up across from my apartment, I asked one of the crew members, “What are you shooting?” He replied, “A TV show called Future Cop.”

Having never heard of it, I shrugged and kept walking. The next thing I saw was Borgnine dressed as a cop, leaning against the front end of a police car and drinking a cup of coffee. I began to tingle inside due to being so close to a celebrity. Luckily, I was sharp enough at the time to ask, “So, what d’ya want to do tonight, Marty?”

Borgnine instantly displayed his warm, gap-toothed smile and replied, “I don’t know, what do you want to do?”

From the sadistic Sgt. “Fatso” Judson in From Here to Eternity, to the lonely Bronx butcher in Marty, to Dutch the “conscience of the Wild Bunch,” Borgnine was an absolutely wonderful actor. Farewell.

The man many knew as Quinton McHale. Marty also acted in more than 30 Westerns.

Borgnine’s first Western was also his first movie alongside Lee Marvin, a tough guy pal who would appear with the actor in numerous films.

This is the first movie Borgnine made for a studio other than Columbia; the Republic film starring Joan Crawford was unusual for its day in that the men became supporting partners for the women

Borgnine admitted this was a “rather forgettable film.” Even so, Marie Windsor had fond memories of her fellow actors: “Randolph Scott was such a gentleman, and as for Ernest Borgnine, I sure like that man—he’s a good actor too!” That “good actor” is shown here, far right, across from Scott.

“This was a great picture with Glenn Ford,” Borgnine wrote in his autobiography. Sexual jealousy lends a Shakespearian twist to this plot when the wife of Borgnine’s character falls in love with an injured cowhand, Ford’s Jubal Troop, who Shep has taken under his wing.

This anti-hero flick was rough—Borgnine plays one of three brothers whose brutal exploits include raping Raquel Welch’s character—but it gave the actor a chance to work with director Burt Kennedy.