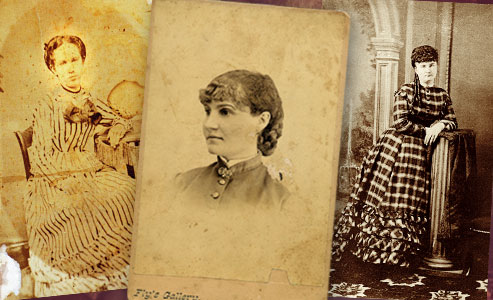 Most True West readers are familiar with the name Earp, but more likely with Wyatt, Virgil, Morgan, James and Warren. You may know Josephine and Mattie, but I’ll bet you didn’t know that collectively these Earp brothers had 11 wives!

Their father, Nicholas Porter Earp, started the trend when he married three times—with his last marriage taking place when he was 80. It seems the Earp men didn’t like being alone.

Wyatt had four women who called themselves his wife, Virgil had three and young Morgan only married once in his short 31 years of life. James, who was the eldest of the Earps born to Virginia, had two wives, while Warren, who was the youngest brother, was married once. Some of the Earp men may have had additional wives, but right now, only 11 can be documented in one way or another.

Since this entire issue can’t be consumed with all of the Mrs. Earps, I have chosen to focus on the more well-known wives who include Allie, Louisa, Mattie and Josephine.

Let’s save Wyatt’s women for last and begin with Virgil, who is the second best-known Earp brother. Virgil married his third and last wife, Alvira “Allie” Packingham Sullivan, between 1871 and 1872. No documentation proves they were married, but they claimed their wedding took place in Iowa or Nebraska.

Allie was a spunky Irish lass who spoke her mind—a habit that often landed her in trouble. When she was 10 years old, Allie’s father, John, enlisted to fight in the Civil War. Shortly after his departure, Allie’s mother, Louise Jane, died. Allie was one of eight parentless children. The local townspeople found foster homes for the children, like Allie, who couldn’t care for themselves.

Because of her brutal honesty, Allie bounced from one home to another. By 1867, she moved in with her older sister, Melissa, in Omaha. Allie worked as a waitress at the Planters House where she met Virgil. Virgil was a stagecoach driver and had come in to eat. She recalled, “For there I was, waiting tables at the Planters House…when I first saw him. It was in the early evening before most of the customers came in, and I had just sat down with all the girls and some chambermaids to have our supper first. I don’t know why I remember him comin’ so plain. He was tall, just over six feet, blond, blue-eyed, and had a red moustache.”

She asked the other girls who he was, and they told her that he drove a stage. She also remembered the first time Virgil had noticed her: “Virge saw me too. He always said I was just gettin’ ready to take a bite out of a pickle…. When I was mean he used to say I was just as sour. But mostly he said I was not much bigger than a pickle but a lot more sweet.”

The couple stayed together until Virgil’s death in 1905. Allie lived to be 96 years old! She was buried with her good friend and sister-in-law Adelia Earp Edwards, who was the Earp brothers’ sister.

Next is Mrs. Morgan Earp, whose husband was murdered in Tombstone, Arizona, in 1882. We have no proof of how, when or where the two had met, but the meeting likely took place in Montana or Kansas between 1871 and 1879.

Louisa Alice Houston was the daughter of H. Samuel Houston and Elizabeth Waughtal. She was born January 24, 1855, in Wisconsin and was the second eldest of 12 children. Contrary to some rumors, she was not the daughter of Gen. Sam Houston.

Louisa was petite, loved flowers, wrote poetry and kept a positive attitude despite living with a debilitating illness for most of her adult life. She suffered from rheumatoid arthritis and eventually “dropsy,” which is now called edema and is the buildup of fluid in the body.

Sometime after the 1870 census was taken on July 27, Louisa left home. Based on her own letters, around 1872 she was in Mason City, Iowa, where she posed for a portrait. She and Morgan eventually owned a home in Miles City, Montana. Shortly after Wyatt and Virgil headed for Tombstone, Arizona, Morgan and Louisa sold their Montana home, and he took her to stay with his parents in Temescal, California, in March 1880.

On July 20, 1880, Morgan alone set out to meet his older brothers and their wives in Tombstone, Arizona. Right before he left, Louisa penned a letter to her sister Agnes:

My husband starts for Arizona in the morning. I am going to stay here for the present with his parents. They do not want me to go and I do not want to go so I think I will stay here this summer.…I have no news to write at present so I will close for this time hoping to hear from you very soon. Give my love to all.

From your sister Louisa Houston to Agnes Houston

Louisa eventually made her way to Tombstone in early December and was reunited with Morgan. This was a short-lived reunion because she returned to stay with his parents in California before Morgan was killed in March 1882. After Morgan’s death, she visited her family in Minnesota and then returned to California. She eventually married again on New Year’s Eve in 1885 to Henry Gustav Peters, but her marriage to him did not seem a happy one, and it took her two months to write about it to her sister. Her health declined, and, in 1894, 39-year-old Louisa was buried alone.

Wyatt was never officially married to Mattie or to Josephine, although the latter would claim the two had wed on a friend’s yacht in 1892. His last two “wives,” Mattie and Josie, respectively, have had numerous stories written about them, but only on a few occasions have they been the main focus.

Mattie was born Celia Ann Blaylock in Iowa in January 1850. She was the third of six children born to Henry and Elizabeth “Betsy” Blaylock. Celia Ann’s father was a farmer by trade near a small but up-and-coming town where she attended school with her siblings. No one knows just why Celia Ann left her strict Lutheran home. She was at home when she was 10 in 1860, but then she does not appear again until the 1880 Tombstone census. In 1871 Celia Ann, who adopted the name Mattie, was living in Fort Scott, Kansas, where she posed for a photograph. Since Wyatt was also in this area at that time, it’s possible this is where Mattie met him.

They arrived in Tombstone, Arizona, in December 1879 as husband and wife, but no documentation proves their union was legal. As Wyatt conducted business in town, Mattie stayed home where she and sister-in-law Allie Earp became close friends. After Morgan was assassinated, Mattie was sent to live with Wyatt’s parents in California, along with James Earp’s wife, Bessie.

Mattie waited for Wyatt to come and get her at his parent’s house, but he never did. She realized he was in love with his next and final lady in his life, Josephine. Mattie returned to Arizona, where she became a prostitute in Pinal and died of an intentional drug overdose in 1888. She, too, was buried alone.

Enter Josephine Sarah Marcus, who went by Josie and Sadie at different times in her life. The name she was most proud of was Mrs. Wyatt Earp. She was born in 1861 to Hyman “Henry” Marcus and Sophie Lewis in New York City. Hyman was a baker by trade who arrived in the city in 1853. Her family moved to San Francisco by 1870 where her father worked as a baker, her mother kept house and Josephine attended school.

Much has been written about Josephine’s life in San Francisco and how she ended up in Arizona, and most of it was based on Josephine’s recollections. However, with access to more records than ever before, historians and others have begun to find flaws in Josephine’s tales of her life. How could she know that one day researchers would be able to fact-check her story with the click of a button? In her stories, events she recalled do not match, people are in places where they truly were not and the timing of many things is just not possible.

She was quite dodgy about much of her life between 1870 and 1885, especially regarding her relationship with her fiancé Johnny Behan. Her relationship with Wyatt was another area she kept quite secret. Regardless, she fell in love for the first time with the charming man-about-town Behan, and he broke her heart when he cheated on her. She then turned to Wyatt, who was handsome, but quiet and stoic. With Behan she had excitement, but with Wyatt she had stability. Their romance blossomed, apparently secretly, in Tombstone.

After Wyatt finished avenging his brother Morgan’s murder, he and Josephine met up in San Francisco sometime in 1882. We have no proof the couple was ever really married, but to their friends and family—they were. They had a series of adventures all in search of making money and traveled the western part of the country. They even ventured to the last frontier of Alaska.

In 1901, they returned to California. The following year, they traveled to the Nevada mines in Tonopah, where Wyatt ran a saloon called the Northern. Late in life, Wyatt and Josephine divided their time between Vidal, California, near their Happy Days mine, and Los Angeles.

Josephine lost her Wyatt in 1929, after which she became obsessed with his biography getting published to her liking. In 1944, she was laid to rest with Wyatt in her family’s plot.

So much more can be shared about these women’s stories. Know this—they all came from average backgrounds, with none being rich or well-to-do. They were all little girls at one time and grew into women who shared one thing—the name of Mrs. Earp. They will be forever remembered in history because of that one commonality. May you all rest in peace, Mrs. Earp.

Sherry Monahan is the author of Mrs. Earp: The Wives and Lovers of the Earp Brothers, published by TwoDot in December 2013. She is also the columnist of Frontier Fare for True West Magazine.