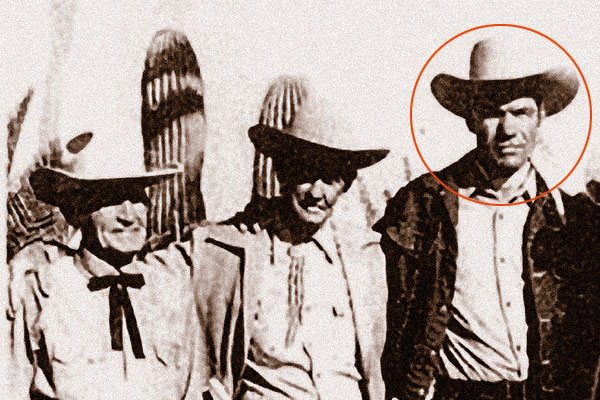 History has taught me, via the war, that I am lucky to be alive, and freedom is not free.

I got the part in 26 Men when my agent, Harold Sloveriand, sent in a photo of me riding a horse. The show asked if I would like to use the screen name “Kelo.” I never heard that before, but I said, “Yes.” So, I’ve been Kelo ever since.

I got to meet some of the last surviving Arizona Rangers in 1957. They visited the set, and we talked about the wild old days. They told me the long distances they had to ride. They told me that if they anticipated gunplay, they would cock their guns first. It could save seconds and might save their lives.

Those Rangers looked like guys who wouldn’t tell stories. But one guy, William Parmer, still carried a single-action pistol, stuck in his pants. I thought to myself, here is some history, and I’m going to photograph it (see picture at right).

I love working with anybody who knew his lines. One time, Russell Hayden (26 Men producer) used a local person, and this guy was full of himself. But when they pointed the camera at him, he froze and couldn’t say a word. We all kinda felt for him. He tried it again and finally they had to take his wardrobe and put it on another actor to do the scene.

Before 26 Men, I appeared on Cheyenne and Tales of Wells Fargo, plus Sergeant Preston of the Yukon in 1958. Then I made Westerns from 1964-65 in Germany and Yugoslavia. I worked with many Westerns actors, including those who went on to other series and movies, such as Lex Barker of Tarzan fame and, later on, Leonard Nimoy and DeForest Kelley of Star Trek.

My last job as an actor was working on a pilot for Alexander Studios between Denver and Pueblo, Colorado, playing the part of “lead heavy.”

My favorite Western movie is She Wore a Yellow Ribbon, starring John Wayne, because he portrayed the West as I thought it might be.

My dad had a ranch outside Pueblo, Colorado. When I was growing up, he always told me to ride a horse with cowboy boots so I wouldn’t get hung up in the stirrups if thrown off the horse.

In WWII, I was in the U.S. Merchant Marines, serving on troop ships, tankers and freighters as an able-bodied seaman. While on the M.S. Western Sun, we almost got torpedoed by a Japanese submarine after we had taken oil to Espírito Santo. I was in the crow’s nest and heard a bunch of hollering. The helmsman and the first mate were turning the ship as fast as they could go, and I saw a torpedo coming at us. It either went under the ship or missed us. I immediately went to my 20 mm gun position. About six fighter planes came to our assistance. Soon after, a flying boat (PBY) arrived and stayed with us until we changed back to our original course.

I received the Golden Boot award in 2003 along with William Smith, Terry Leonard, Sons of the Pioneers, Kris Kristofferson, Tommy Lee Jones and seven other well-deserving contributors to the Western movie and TV era.

My favorite place is southern Arizona because I lived there for 11 years. I loved the sunsets and milder winters.

The main problem with young people today is too much TV, time on the computer and cellphone talk. It robs the interaction of “one-to-one” communication.