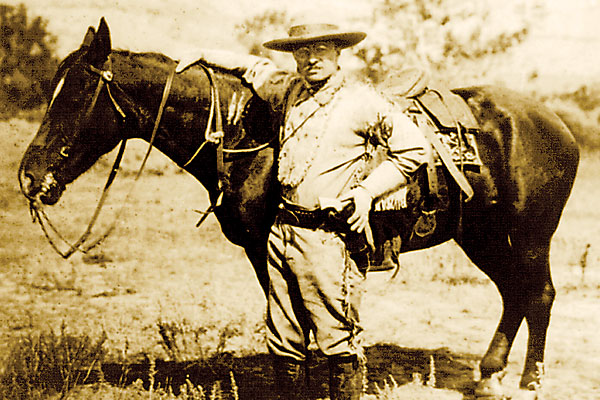 Lyndon B. Johnson compared going to Vietnam’s aid to coming to the aid of the defenders at the Alamo.

Leonid Brezhnev derided Ronald Reagan as a global cowboy in 1981 (the Cold War Soviet leader did not like the “Great Communicator’s” plan to arm Afghan rebels fighting Soviet occupation).

Our current president George W. Bush has been called a hard-line cowboy for his provocative statements like “You’re either with us, or you’re with the terrorists.” (Indicative of “Range Wars” theology: circle the wagons and protect your own; after the “homestead” is secure, then you can go on the offensive.)

Cowboy beliefs and history have played a role in American politics since the mid-1880s, when “cowboy” entered the political debate as a derogatory term. By the 1900s, though, the image of a degenerate cowboy had transformed into that of a virtuous hero.

Dakota Territory rancher and former Rough Rider Teddy Roosevelt led the charge in redefining a cowboy president as a hero when he took up the nation’s highest office in 1901. He kicked off the notion of presidential “cowboy diplomacy” by summarizing his approach to his international policy as, “Speak softly and carry a big stick.”

Being a cowboy is also a state of mind; you can be one out here in the glorious American West or while walking the New York City pavement or in Germany or Australia or our neighbor up north Canada. Since the turn of the 20th century, U.S. presidents too have recreated themselves as cowboys in the eyes of our nation and the rest of the world, a topic fittingly explored during this Presidential election year by the Autry National Center in Los Angeles, California.

The “Cowboys and Presidents” exhibit runs at the Autry through September 7. It then travels to the Bob Bullock State History Museum in Austin, Texas, opening on October 18 through January 4, sixteen days before our nation learns who our next president will be—and if he (or she) will don a white hat too. We share photographs of America’s Cowboy President heritage from that exhibit and from our nation’s Library of Congress.

Democratic contender Hillary Clinton has already stated that if she wins the election, she will dispatch diplomats around the world bearing the message that the “era of cowboy diplomacy is over.” Yet the fascinating exhibit at the Autry clearly demonstrates why it is not likely that we’ve seen our last Oval Office Cowboy.