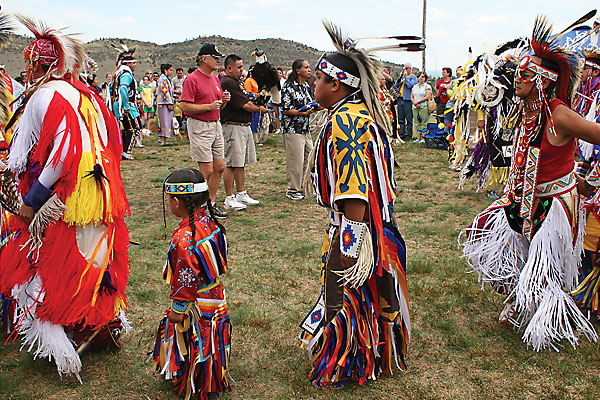 6:12 p.m. Friday: Now I know what it feels like to be a piece of turquoise in the middle of a Charles Favour mosaic bracelet.

It’s shoulder-to-shoulder people inside Ortega’s On The Plaza. On the eve of the Santa Fe Indian Market, the store is holding its annual opening reception for artists. Picture a New York subway at rush hour, only everyone’s happy. I see jewelry artist Dennis Hogan talking to a customer. I’d wave, but I can’t lift my arms.

City officials say Indian Market will bring in 100,000 visitors. Skeptics question that figure, but it feels like there are 100,000 people inside Ortega’s right now.

This weekend will be peppered with lectures, auctions, movies, seminars, book signings and gallery openings featuring Indian and non-Indian artists, like Favour and Hogan. But Indian artists are the stars, and Indian art markets everywhere are booming.

“The interest in collecting Indian art goes back to the first contact between Europeans and North America,” says James Nottage, vice president and chief curatorial officer at the Eiteljorg Museum of American Indians and Western Art in Indianapolis. “That is why those earliest ‘tourists’ created collections of what today amount to the best 17th-, 18th- and 19th-century American Indian objects in collections in England, France, Germany, Finland, Russia and elsewhere.”

Railroads and trading posts helped create the opportunity for markets, and later, museums brought a new legitimacy to the art form, Nottage says.

“Up to and including the Great Depression, the mini-industry of Indian art production and the appetite of collectors grew,” Nottage says. “Yes, there has been an ‘explosion’ of interest and it most clearly is evident from the late 1960s on.”

It isn’t slowing down.

This year, the Heard Museum’s Guild Indian Fair and Market in Phoenix, Arizona, celebrated its 50th anniversary, and the Gathering of Nations powwow in Albuquerque, New Mexico, turned 25. The American Bus Association named the 75th Annual Hopi Festival of Arts and Culture, scheduled July 5-6 at the Museum of Northern Arizona in Flagstaff, Arizona, the top 2008 event in the United States. The Haskell Indian Art Market, put on by Haskell Indian Nations University in Lawrence, Kansas, will celebrate its 20th anniversary September 13-14.

Not enough? More than 200 artists and performers are expected at the Tesoro Foundation’s Eighth Annual Indian Market & Powwow on May 17-18 at the Fort restaurant in Morrison, Colorado. Oklahoma City plays host to the Red Earth Native American Cultural Festival on June 6-8. Afterward, you can head up to Indianapolis, where the Eiteljorg Museum of American Indians and Western Art will put on its prestigious Indian Market on June 21-22.

“They’re all good markets,” Comanche painter Nocona Burgess says. “But nothing compares to Indian Market because of the volume, the versatility and the amount of people. Plus Santa Fe just has that appeal.”

7:30 a.m. Saturday: There’s a rumor that there’s a parking spot open on Alameda, but I know manure when I smell it. Parking? Get real.

“You don’t park,” Burgess says. “There’s no parking. The artists don’t even have a place to park.”

Santa Fe Indian Market opens at 7 a.m. Saturday, and collectors are already whipping out their wallets to buy prized items.

Some 600 canvas booths fill the plaza, all along San Francisco Street, across Palace Avenue, up Lincoln and Washington. Tents and people. People and tents. People and more people. This weekend, Santa Fe becomes, as my wife often says, Calcutta. No wonder many locals leave town this weekend. But I’m an adventurer.

Noon Saturday: The Southwestern Association for Indian Arts, the nonprofit that runs Indian Market, is presenting its awards on the main stage. Well, that’s what is written in the program anyway. It’s hard to see from here. I need to rescue my wife before she buys that Santa Clara Pueblo turquoise necklace we can’t afford. Then I want to see if Dallin Maybee, the Seneca and Northern Arapaho beadwork/quillwork specialist who won 2007 Best of Show honors, has anything left in his booth. Yeah, like that’ll happen.

From Arapaho to Zuni, Indian Market brings them all. “You can see trends, native cultures, all the different art that’s represented from all over the country,” Burgess says. “You don’t have to go all over to see Mohawk artists, artists from Alaska, Washington, Oklahoma. You get a good idea of what’s going on in the Indian art world.”

1:34 p.m. Saturday: A woman just walked by in a buckskin dress decorated with shells. Another dons a squash blossom necklace that costs more than my Ford Mustang.

Time to get out of here. Tomorrow’s my big day.

7:30 a.m. Sunday: The key, I’ve learned, is to get here early on Sunday. Parking meters are free, and I find a spot. Most serious collectors are finished shopping, so the market will slow down on Sunday. Sort of. Already a zillion tourists are flocking to the plaza, and the market doesn’t officially open until 8 a.m.

No one’s around the main stage, so if I stay put, I’ll have a great view of the clothing contest. But wait … isn’t that Al Chandler Good Strike over there? I love his stuff.

“The most notable change in the last 15 to 20 years is the growth of sophistication and quality of the art,” Nottage says. “Artists today can still be very traditional in their jewelry or other arts, but they also embrace new ideas quickly and constantly develop their work. Fetishes, for example, have existed for many centuries. As a collectible art form, they only have their growth from the 1970s on.”

9:07 a.m. Sunday: Maybe it was a mistake to wander away from the main stage. A poodle’s at my feet. Why would anyone bring a small dog to Calcutta? The clothing contest has begun. Get the &#*@!*%! out of my way! I’m trying to take a photo here!

11:32 a.m. Sunday: I wish Pig Boy Willy were hawking his carne adovada burritos, but I’ll settle for a Navajo taco. Now, which line has fewer than 14 people?

Indian dancers perform in the food court. From the main stage to the Cathedral Basilica of St. Francis of Assisi, dancers are as popular as roasted corn ears. Youngsters perform too, and youngsters watch.

Another reason the market’s successful.

SWAIA provides funds for emerging artists—Assiniboine Sioux Jessica Growing Thunder won the youth Best of Classification in 2006 for a stunning cradleboard, which I didn’t buy. Young and old get their due at Indian Market.

Santa Fe’s first Indian Market, back in 1922, was created by Edgar L. Hewitt, the director of the Museum of New Mexico who selected the prize winners and prohibited artists—who had to wear feather bonnets to make tourists happy—from selling their work. Luckily, rules began changing in the 1930s. This is a juried Indian art show, the largest and most successful of its kind in the world.

3:17 p.m. Sunday: I estimate 3.17 million people at Burgess’s booth. They must know Nocona is the great-great grandson of Quanah Parker. Or they love his acrylics-on-canvas. Or maybe they’ve stopped to watch the Indian dances going on in front of Nocona’s booth.

The dancers leave, the crowd starts moving and I stick my head in to say hello to Nocona. It has been quite the show.

4:30 p.m. Sunday: A half-hour to go, and things are winding down. Maybe now I can chat with Ute/Navajo sculptor Oreland C. Joe. What luck! The crowd’s not too big, so I ask him what brings him to Santa Fe.

“I just got tired of the other circuit, the auctions,” he says. “I wanted to get in contact with the buyer.”

Which is why many artists today prefer the art-market scene. They get to meet the buyers. From L.A. to D.C., each market offers something special.

“Overall the Eiteljorg Indian Market is similar in format to most others, however its geography makes it unique,” says John Vanausdall, Eiteljorg president and CEO. “There’s really nothing in the Midwest that can compare with the size and quality of the Eiteljorg market.”

Adds Burgess: “The Heard, the Eiteljorg and others, they’re not as overwhelming both for the artist and the viewer. And because they’re smaller, they can do more for the artist. And you get to see everything.”

I sure didn’t see everything at Santa Fe. But I survived Indian Market. And there’s always next year.

Can’t get a hotel room in Santa Fe for Indian Market? Who can? Why waste your time trying; instead check out these top annual Indian art events before you land in Santa Fe (and then start all over again next year with the Heard’s big show).

Mesa Verde Country Indian Arts & Culture Festival: The two-day juried art market, part of a 10-day festival, is smaller, lesser known and younger (eight years) than most markets, but it’s hard to beat the history and the view at Mesa Verde National Park near Cortez, Colorado. May 24-25.

Red Earth Native American Cultural Festival: A three-day celebration of heritage and art, the 22nd annual event will bring in members of more than 100 North American tribes to Oklahoma City for the juried art competition and dance contest. June 6-8.

Eiteljorg Museum of American Indians and Western Art Indian Market: The 16th annual event in Indianapolis will attract major collectors as well as casual tourists; more than 140 artists from 60 tribes exhibit their works at one of the world’s best Western art museums. June 21-22.

Heard Museum’s Guild Indian Fair and Market: More than 600 top-name Indian artists are on hand for this show on the grounds of the prestigious museum in downtown Phoenix. The two-day market also features music, dance, food and art demonstrations. March 7-8, 2009.