Camera in the Cow Camps 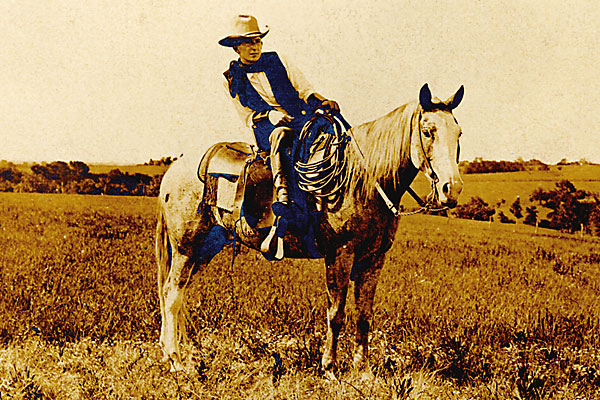 At the turn of the 20th century, a young cowboy obsessed over how he could best preserve true cowboy culture.

Erwin Evans Smith, born in 1886, roped, branded, herded cattle, rode horseback and cooked chuckwagon food while staying at his uncle John Sanders’s JCS Ranch in Foard County, Texas. Some of the old cowhands shared their stories with him, as well as their concerns about how life on the open range was gradually disappearing, due to the invention of barbed wire and railroad lines that were making long cattle drives a thing of the past. (The 1885 Kansas Quarantine law to keep out Texas cattle fever also helped put the nail in the coffin.)

A grown-up Erwin took his love for the open range with him when he studied painting and sculpting at the Art Institute of Chicago (his school mate was artist Georgia O’Keeffe who would make her mark in Santa Fe) and the Boston Museum of Fine Arts. But after receiving his first camera as a teenager, he soon realized the only way to truly capture the beauty of the open plains was through photography. He wrote: “From the first time I laid eyes on the sun burnt plains of the West, with its grand scenery, I have been in love with its still, enchanted solitude. Its change of colors no artist can portray.”

Erwin felt he had an edge over some of the artists of the times, like Remington and Russell, who drew the frontier life he was preserving on film. He even said of the New York-born artist Remington, in 1908, “Some of Frederic Remington’s illustrations are magnificent, but in certain of his pictures, in not a few of them, in fact, Mr. Remington has not been accurate. This is probably due to the fact that he doesn’t know the men and the life with that thorough knowledge an artist who paints it should have. One must live among them to acquire it.”

The camera allowed Erwin to capture the hard-working cowboy life he knew firsthand. He swore to portray the relationships cowboys had with their horses, cattle and the open plains. In doing so, he helped preserve important details of that culture and dispelled some of its most romanticized myths.

In 1904, a few years after Edward Curtis began his lifelong project to photograph the West’s vanishing Indians, Erwin joined a group of young men and traveled the open range as a cowhand across Texas, New Mexico and Arizona. During these summer vacations from art school, between 1905 and 1912, Erwin photographed hundreds of people and places. He rode the range with cowhands from outfits including the JA, Frying Pan and Matador Ranches.

Erwin worked with a variety of cameras available in the early 1900s, but many of his most impressive action shots, taken at the peak of drama, came from Kodak’s simple box camera, which utilized glass plates. Erwin had a keen eye for capturing the drama at just the right moment. Some of his most popular images of cowboy life depict cowhands roping and busting broncs and branding and butchering cattle. He even managed to photograph some shots of himself riding a bucking bronco.

Starting in 1906, Erwin’s photographs began appearing in popular national magazines like The Saturday Evening Post, and they appeared regularly in Cattleman magazine through the 1940s.

By 1932, Erwin was running a few cattle and looking after his mother, in a small house his half-sister owned in Bonham, Texas. His mother died in February 1947, and death took him that September. Erwin’s half-sister Mary Alice Pettis graciously donated more than 1,800 of his images to the Library of Congress in 1949. Four years later, the University of Texas Press published a book of his photographs titled Life on the Texas Range.

Erwin’s photographs include some of the best-known images of Southwestern range life, and his life’s work has been recognized in the National Cowboy Hall of Fame. His work ranks as highly as that of other frontier photographers: L.A. Huffman, Charles J. Belden, Evelyn Cameron and F. Jay Haynes.

This photo essay reveals Erwin’s skill in capturing the daily drama of a cowboy’s job, from the cook to the range boss to the wranglers, during the early 1900s. The Amon Carter Museum in Fort Worth, Texas, holds the principal collection of his work.