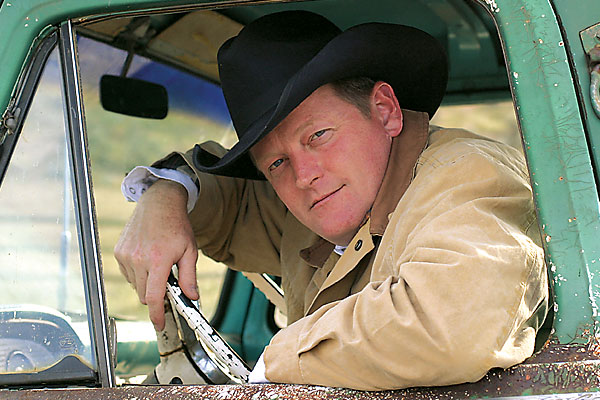 The Old Cheyenne were with me, and I could feel their strength as I continued along the trail, my heavy boots forming the snow as I went. The drums were there too, matching my progress in perfect fashion, providing an easy rhythm and keeping my legs moving. I felt strong, like I hadn’t in many years, perhaps like I never had. I watched as my breath began blowing out ahead of me, and it was as if the wind did not affect it. The searing air felt good in my lungs, and I almost felt as if I could run; but the steady beat of the drums held, and so did I.
—The Cold Dish

When you take a grizzled Wyoming sheriff who has an independent cadre of deputies and a diverse group of friends, and throw a murder into the mix, you stir a pot of surprises that will keep you turning the pages.

Craig Johnson’s novels—The Cold Dish, Death Without Company and now Kindness Goes Unpunished—put a reader in the passenger’s seat of “The Bullet” as Sheriff Walt Longmire of fictional Absaroka County, Wyoming, solves one case after another: the shootings of three youths on the edge of the Northern Cheyenne reservation along the Montana-Wyoming border; the death of a Basque woman in a nursing home; the killing of his daughter’s ex-boyfriend in Philadelphia.

Sheriff Longmire does his work with the advice of his subordinates and his best friend Henry Standing Bear, a Northern Cheyenne tribal member, who happens to have a lot of relatives (some alive, some dead) who also give aid.

A former police officer, Johnson now writes and ranches near Ucross, Wyoming: Population 25. His fictional town of Durant is based on Buffalo, where Walt Longmire is so popular, he even got 13 write-in votes for Johnson County sheriff in the last election. “I had to go apologize to the incumbent sheriff,” Johnson says.

Many people populate Durant and a Walt Longmire novel, including the “sheriff” himself.

TW: Sheriff Walt Longmire is a unique character—hard-bitten, but with a soft underbelly. Is he a composite of any real Wyoming sheriffs you know?

CJ: I didn’t use any of the sheriffs I know as a model for the characters, but I did use characteristics of Wyoming sheriffs for bits and pieces of Longmire’s character. It is a patchwork because rarely does someone walk in the door who is what you need. My characters are a Dr. Frankenstein kind of product, pieced together from real people, but all the characters in a book are there for a purpose.

How about his partner Vic?

She’s everything that Walt isn’t. She’s technologically advanced, while he is the old style of law enforcement. It’s turned out to be one of the best things I could have done. The books are first person with Walt telling the story in a strong masculine narrative. She provides the balance for that.  And Vic and the other females in the stories are the lifeblood for the books. Walt Longmire books are not just cowboys and Indians, they’re not just men’s stories. They appeal to women as well because those female characters really bring another voice and another strength to the books.

Vic doesn’t mince words does she?

Victoria Moretti is young, urban and profane. … even with, or maybe because of, her language, she has become a fan favorite.

Where do you draw your inspiration for your Indian characters, especially Henry Standing Bear?

Marcus Red Thunder, Northern Cheyenne, is a really good friend of mine, and he has shared his culture with me…. I love the Indian sense of humor. I utilize that a lot, because a lot of the Indians I deal with have these incredible senses of humors…. A lot of times people paint people with a broad brush stroke—an Indian is an Indian, a cowboy is a cowboy, a sheriff is a sheriff. I always try to think, if I were this person: How would I feel? Who would I be?…. In the book, Henry is almost a superhero. Who wouldn’t want a Henry in his or her life?

For the latest book, Kindness Goes Unpunished, Johnson transported Walt, Vic and Henry to Philadelphia where they engaged in solving the murder of Longmire’s daughter Cady’s ex-boyfriend, a story told to bring Cady into the books and to introduce Vic’s Italian family. But don’t worry readers, Johnson says the “West is in my soul,” so don’t expect Longmire to hang out long in the East.

How does the land and landscape affect what you write?

I have a ranch out in Ucross in northern Wyoming. It’s just the rolling breaking hills coming off the Powder River. I go down to shovel out the barn and sometimes the light just hits, and I’m struck by the place, am faced with some of the romance of the West as far as the landscape is concerned. That’s the trick. That’s the underlying meaning of it all—to slow down to actually notice. I think that is part of it as a writer, to notice, to tell people about it.

What’s next? Will Walt be back in Wyoming?

Yep, the fourth book in the Walt Longmire mystery series is Another Man’s Moccasins, due out in the spring of 2008. It’s always back to the three W’s—Walt, Wyoming and the West.