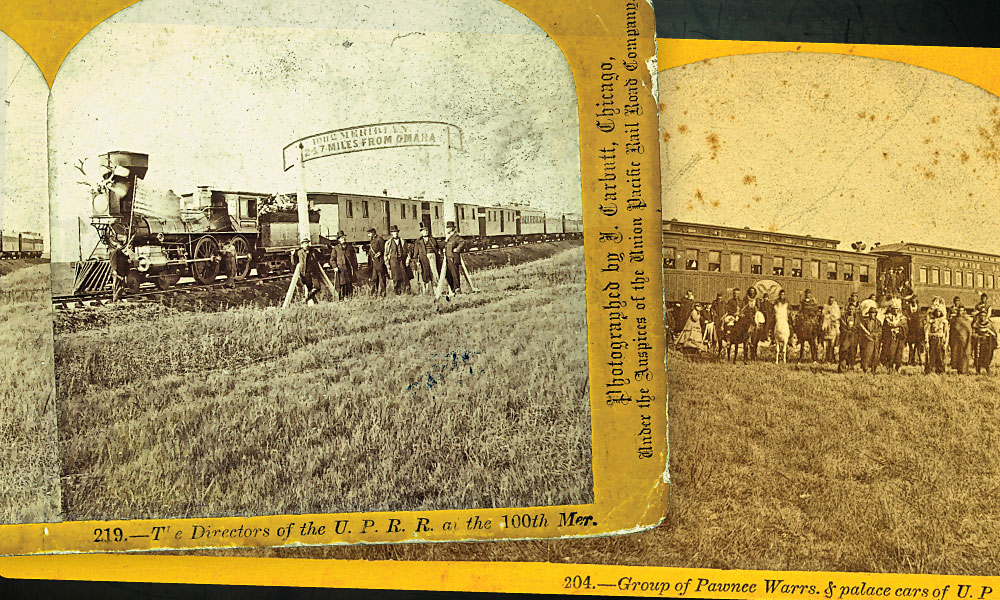 As Nebraska gets ready to celebrate 150 years of statehood, you likely know these facts:
it is the only state with a unicameral legislature; Nebraska City is the home of Arbor Day; and the Oregon, California and Mormon trails all sliced through the state leaving behind ruts that have stood the test of that century and a half.

In 1820 Stephen Long declared a big portion of what would become Nebraska as the Great American Desert, and for decades afterward most people venturing through the state did not stop for any length of time. Towns along the Missouri River like Brownville, Nebraska City and Bellevue developed first, becoming trading centers for riverboats.

Fur traders established posts used by American Indians and trappers that were in operation long after the fur trade dwindled. Pioneer travelers, for the most part, took their wagons over the landscape, burying their dead all along the route but again,
just passed through. The great heartland remained virtually unsettled.

In the 1850s increasing numbers of people sought homes in the region, but this land was undeveloped—not even a territory until 1854, when Stephen A. Douglas proposed the Kansas-Nebraska Act, which would form two territories. One territory north of the demarcation line did not allow slavery (as part of the 1820 Missouri Compromise), and the other where slavery might be approved by the residents. Although the Kansas-Nebraska Act caused a new rift in the nation, ultimately it was approved and both territories were created.

Nebraska Territory encompassed a huge area, including the land that would become the State of Nebraska on March 1, 1867, plus the region that would ultimately be split into North Dakota, South Dakota, most of Wyoming and much of Montana. The development of the region expanded in 1862 with approval of the Homestead Act.

Two of the most important transportation routes in the country pass through Nebraska: the overland trails (Oregon, California, Mormon and Pony Express) and the Union Pacific Railroad. Daniel Freeman claimed the first homestead in the nation at a site near Beatrice, which is now a part of Homestead National Monument. The opportunity to claim free land under the Homestead Act, combined with development of the railroad, led people to put down roots in the new state of Nebraska.

The state of Nebraska has given us Runza and Reuben sandwiches, Kool-aid, Henry Fonda, Roger Welsch and his “Postcards from Nebraska,” plus iconic literature by John G. Neihardt, Willa Cather and Mari Sandoz.

The Nebraska State Capitol and its unique unicameral legisla-ture is a place to begin any journey through the state, but I head quickly to north and east to the Omaha metro area for a visit to the Durham Museum at Union Station.

In downtown Omaha, the First National Bank’s Spirit of Nebraska’s Wilderness and Pioneer Courage Park  is a sculptural reminder of the trails west and includes a wagon train, bison herd and flock of Canada geese. This sculpture park seamlessly melds into the urban environment covering several city blocks as the more than 100 individual bronze artworks reflect the people and animals that have been a part of the Nebraska landscape.

Overshadowed by Omaha’s larger population, Florence certainly holds its own in the area of history. The hillside cemetery, where lie hundreds of Mormons who did not survive the 1846 winter camp on the western bank of the Missouri River, is a quiet reminder of sacrifice by people who had come here just seeking a better life in the West.

Fort Omaha, also in Florence, played an important role in early Nebraska history. Here the trial of Ponca Chief Standing Bear took place in 1879. This important court ruling established that American Indians were considered “persons,” and therefore would have the same rights as white settlers. At the time Gen. George Crook commanded the fort and his house remains an attraction on the campus of Metropolitan Community College.

Travel north out of Omaha toward Blair and then west to the small town of Neligh, location of the Neligh Mill State Historic Site. This is one of the great examples of 19th-century flour mills. Construction on the brick mill started in 1873 and the facility still has all of the original equipment in working order. Started by town founder John D. Neligh, the mill was ultimately completed by W. C. Gallaway and produced flour that was sent to military posts in the Department of the Platte and to Indian reservations in South Dakota, besides serving area farmers and homesteaders.

Farms dominate Nebraska’s landscape and fields, but the great center diamond in the state are the Sandhills, the largest region of stabilized sand dunes in the Western Hemisphere. Enter the Sandhills as you travel west and north from Neligh to Valentine, the largest city in Cherry County, a sparsely settled area immortalized in the photographs of Solomon Butcher, who gave up the hard work of homesteading to travel and photograph the early settlers. This natural grassland attracted millions of bison and today is still good grazing land for cattle.

Visit Arthur Bowring Ranch State Historical Park east of Merriman for a view of the history of ranch life in the Sandhills. This living history museum is preserved as a working cattle ranch from the early 20th century and includes barns, bunkhouses, a sod house and a visitor center housing memorabilia such as antique glass, china and silver from the family of former U.S. Senator Eve Bowring.

Many people have written about this Nebraska landscape, but perhaps the best known writings are by Mari Sandoz who grew up in the Sandhills, and who authored Old Jules (a biographical novel about her father), Cheyenne Autumn and Love Song to the Plains (a book that is one of the earliest, and best nature books about the region). Learn more about Mari Sandoz at the Mari Sandoz High Plains Heritage Center at Chadron State College in Chadron. While you are at it, visit the Museum of the Fur Trade, also in Chadron, arguably the best fur trade museum in the country.

From Chadron continue west to Crawford and my favorite place in Nebraska: Fort Robinson. The appeal of this place comes on many levels. It is situated in a stunning landscape at the edge of the Black Hills. It has history from the Lakota people who were here—Red Cloud had an agency, Crazy Horse was stabbed and died at the camp—to my favorite frontier/military character, Dr. Valentine T. McGillycuddy, w who cared for soldiers and for Crazy Horse and his wife, Black Shawl. This is where one part of the tragic story of the Cheyenne Outbreak took place.

Fort Rob has a military history that encompassed the 19th-century Indian Wars era and continued through World War II. It was a remount station, a K-9 training facility, and nearby was a German POW camp. Today it is a Nebraska State Historic Site where you can attend theater performances, walk the parade grounds, ride horseback and stay in 19th-century era military quarters.

Driving from Fort Rob south on Highway 71 to Scottsbluff takes you through wide-open country where there is little evidence that anything modern has intruded. Anyone who wants a chance to reenergize and understand a bit about Mari Sandoz’s plains, should go there.

Fur trapper Hiram Scott died in the vicinity of the large bluff in Western Nebraska that now bears his name, and Scotts Bluff became a favored camping spot for pioneers traveling on the overland trails in the 19th century. After a visit to the Scotts Bluff National Monument, travel east along U.S. Highway 26 past Chimney Rock, undoubtedly the most recognized landmark in the state of Nebraska. It was a marker for the overland travelers, and is the image used on the official state quarter.

Continue traveling east through Ash Hollow, near the location of the Battle of Blue Water Creek. The battle was General Harney’s retaliation attack on a Lakota camp in 1855 in response to the killing of soldiers from Fort Laramie the prior year in what became known as the Grattan Massacre. One of the Nebraska 150th anniversary events will be a gathering of the tribes and celebration of American Indian culture at Ash Hollow.

The cattle trails that came north out of Texas, crossed Oklahoma and Kansas, and then pushed on into Nebraska had a terminus in the cowtown of Ogallala, where you can visit a replica of Front Street as well as Boot Hill Cemetery. Continue to North Platte, known for Scouts Rest Ranch, which William F. “Buffalo Bill” Cody developed.

Jumping forward half a century, North Platte gained nationwide prominence during World War II for the Canteen that served as a way-point for service members taking trains toward military training camps. Although most of their visits were brief, at the North Platte Canteen soldiers had a chance to eat a homecooked meal, obtain a few supplies, and visit with local residents.

Pioneer travel is a focus of two attractions in Kearney—the Platte River Archway, which interprets the overland trails, and Fort Kearny State Historic Site, at the site of the frontier era military post that opened in 1849. In early spring thousands of sandhill cranes flock to the Platte River from North Platte to Kearney, Gibbon and Grand Island, feeding during the day in nearby fields before roosting at night along the river as they take a break on their long migration north.

Willa Cather joins Mari Sandoz in the pantheon of Nebraska writers. Cather spent her childhood in Red Cloud, which became inspiration for some of her most recognized books: My Antonia, O Pioneers! and The Song of the Lark. The Willa Cather Foundation hosts an annual Spring conference in Red Cloud and offers guided tours of places from Cather’s life, including her childhood home. Cather wrote of the homesteaders who came to this prairie area.

Candy Moulton is the author of Roadside History of Nebraska and Valentine T. McGillycuddy: Army Surgeon, Agent to the Sioux.