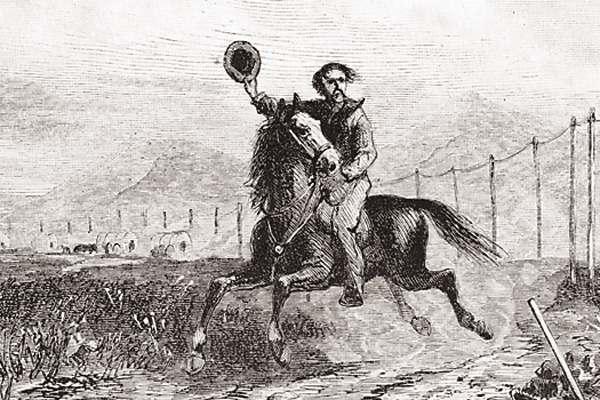 • The idea behind a relay mail service didn’t originate with the Pony Express; it was first proposed in 13th-century China by Marco Polo.

• St. Joseph, Missouri, was chosen because it was the Westernmost point the railroad and telegraph reached—and because its town leaders gave a generous “economic development” package to the Pony Express, including free railroad and ferry passage.

• The mochila was designed by Israel Landis.

• The Pony Express company had only 60 days to get the system underway, from hiring riders to buying up to 500 horses to building 138 relay stations.

• California Senator William Gwin, who so championed a Northern route for mail service, deserted California after the Civil War broke out and joined the Confederacy. Following the war, he fled to Mexico, where Maximilian made him Duke of the Province of Sonora.

• Buffalo Bill is credited with the longest nonstop ride, from Red Buttes Station to Rocky Ridge Station and back, when he found his relief rider had been killed. The distance was 322 miles. He’s said to have completed it in 21 hours and 40 minutes, using 21 horses. As precise and authentic as that may sound, there is considerable doubt that Bill Cody’s boasts of being a Pony Express rider were true. True West asked historian Joseph Rosa, an expert on Cody, what was up and he said, “Some people believe Cody rode the Pony, but I have yet to be convinced since available evidence places him in Leavenworth and Colorado during the time he claims to have ridden. Cody was a great storyteller.”

• The Pony Express was run by the Central Overland California & Pike’s Peak Express Company, whose initials (C.O.C. & P.P.) were translated by its employees as “Clean Out of Cash and Poor Pay.”

• The National Pony Express Association, with over 800 members, does an annual rerun of the route, and the participants take the same oath of civil and sober conduct as the original riders did 143 years ago. For more information, write?to the National Pony Express Association, P.O.?Box 236, Pollock Pines, CA 95726; email?xptom@ccnet.com; or call President George Lange at 801-254-3111.

• Some have claimed Wild Bill Hickok was a rider, under the name “Duck Bill,” but historian Joseph Rosa is emphatic that Hickok never rode and was never called Duck Bill (although he was called “Dutch Bill,” and perhaps the other is just a misspelling of that nickname).

• In the spirit of the Pony Express, the Women’s Motorcyclist Foundation has raised over $1.5 million for the Susan G. Komen Breast Cancer Foundation in three national rides. Their Pony Express Relay 2003 is planned for this summer and is titled “Journey of Hope down Road to a Cure.”