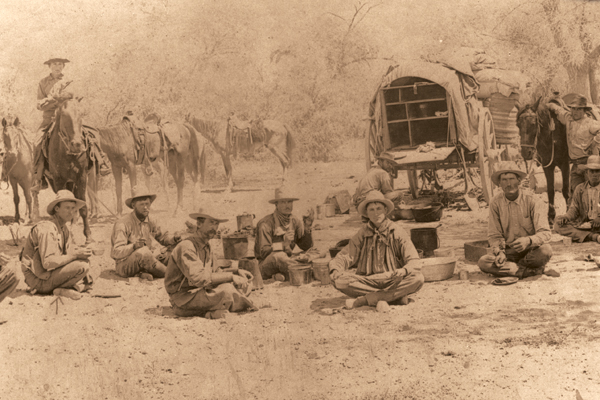 The original pioneers came to the land as explorers, as dreamers—claiming a hunk of dirt to make a life.

They came, as historians remind us, “not to paradise where ease awaited them, but to the most demanding of areas.”

They dug for water and built corrals; they tilled crops and built their own homes; they fought poverty and hunger, but they made a place for their children. Their hard work, determination and grit will always be admired and respected.

These are their stories.

Of all her memories about being raised on her grandparent’s Cottonwood Canyon Ranch, Lucille Taylor best remembers this: “We’d leave in the early morning and be gone till darn near sundown. We’d take lunch and ride on horseback all day.  Sometimes it was cold; sometimes it was sunny, but my brother and I would be out all day with grandpa until we found exactly the right Christmas tree.”

McDonald family patriarch, Martin McDonald, at an adobe house that great-granddaughter Lucille Taylor says “might be the oldest house in Cochise County.”

“The first three years [on the Cottonwood Canyon Ranch] we had a hard time,” William recalled years later.  “There was a quarantine in that country against tick fever and not a cow could be shipped out.  My brother and I hauled wood, sold coyote skins and did anything else we could to try to make a living.  We stayed where we were and waited it out.  After the quarantine was lifted, I began building up my herd.”

“We found plenty of excitement in Arizona,” William McDonald told historians, relating his family’s move in 1892  from sedate Texas to rip-roaring Arizona. He eventually owned the land where Geronimo had surrendered and was on the posse that searched out the notorious Apache Kid. (His wife, Rhoda, was briefly married to the outlaw Johnny Ringo—or at least, that’s the “family secret.”)

“The ranch was hard work,” Lucille Taylor remembers. “But it was a way of life.  It was come one, come all, and we had a lot of fun, too: parties and rodeos that lasted day and night until the next morning, or as long as the whiskey lasted. We all stayed in the life—we don’t know any other life.  You don’t get rich, and it’s nothing but hard work, but kids don’t get in trouble raised like that.”