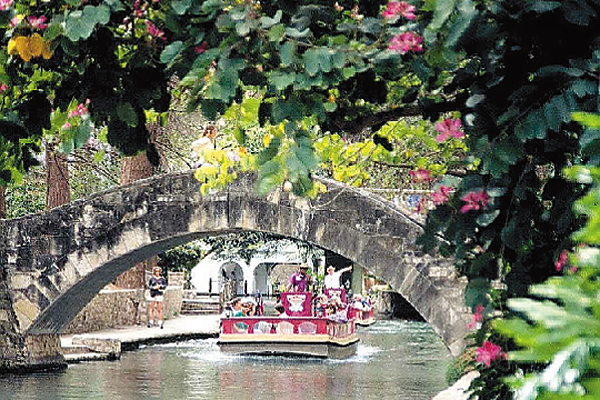 Step off a plane at the San Antonio airport and you’re met by a quartet of cultures—Anglo, Mexican, Spanish and German.

To experience the West in San Antonio is to see it from a Southwest and Tex-Mex perspective.

Founded in 1719 as a military, civil and religious outpost, San Antonio became a way station on the trail between the Rio Grande and the East Texas missions. By 1960, the city had become one of the nation’s 10 largest.

The best way to grasp the city’s cultural heritage is to make the Alamo your first stop. Established in 1718 as a mission, it has become the most famous historical site in Texas, drawing thousands of visitors each year. Located in the heart of the city, the Alamo mission contains relics from the Republic of Texas. You’ll be surprised at how small this landmark is, considering its larger-than-life legend.

A few blocks from the Alamo is the River Walk. A popular destination, the three-mile Paseo del Rio is a haven for shopping and culinary experiences, and the canal boat ride is a must.

La Villita, near the River Walk, is a beautifully landscaped district steeped in history. It’s a unique arts and crafts locale with shops, artists in residence and restaurants.

Also near the River Walk is the King William Historic District, a part of the city’s German influence. A 25-block area near downtown on the south bank of the San Antonio River, the district features elegant 1800s residences, many of which are now shopping emporiums and bed and breakfasts.

If shopping is your pleasure, you must tour El Mercado’s 32 shops in  an authentic Mexican market setting. You’ll also find 80 specialty shops in the neighboring Farmers Market Plaza. If you’re lucky, there’ll be a Hispanic festival with mariachis and Mexican dances. And if you pop into Sak’s Fifth Avenue, you’re bound to chuckle at the oversized cowboy boots at the entranceway.

Another landmark is the Majestic Theatre, one of the few remaining Vaudeville movie palaces, now home to the San Antonio Symphony and the AT&T Broadway Series.

The Mission Trail is also a must, giving a glimpse of ecclesiastical life in early San Antonio. Missions San Jose, San Juan, Espada and Concepcion were part of a colonization that stretched across the Spanish Southwest from the 17th to 19th centuries.

Museum-hopping is essential in this city, with your choice of the Witte, McNay, San Antonio Museum of Art and the Institute of Texan Cultures, which features exhibits on the 27 ethnic groups that founded the Lone Star State.

At the end of the day, stop at one of the city’s best kept Western secrets, the Buckhorn Saloon and Museum. You’ll find thirsty cowboys and plenty of nostalgia, from Western-style memorabilia to former owner Albert Friedrich’s hunting mounts.

When Friedrich was alive, he offered to display the prized kills of trappers and cowboys. Thus began a competition, especially among cowboys, to bring bigger and better trophies.

But after all, big is a part of the Texas spirit. And it’s alive and well in San Antonio.